Water-Exchange Response of Downstream River–Lake System to the Flow Regulation of the Three Gorges Reservoir, China
Previous Article in Journal

Impact Analysis of Karst Reservoir Construction on the Surrounding Environment: A Case Study for the Southwest of China

With the rapid growth of the global demand for low-carbon energy, the development of hydropower has ushered in new development, but the ecological and environmental problems caused by this cannot be ignored. Taking the safe and efficient operation of water conservancy projects as the goal, this paper took the Maling Water Conservancy Project (MWCP) as an example to predict and evaluate the ecological environment risks of water conservancy projects. Based on the on-site geological surveys and experiments, the big well method and the long narrow horizontal tunnel method were used to estimate the water inflow from the underground caverns. The contaminant migration model was used to predict and analyze the groundwater quality. The impact of the MWCP on the surrounding environment was systematically analyzed and evaluated. The results showed that the estimated water inflow from the underground powerhouse and the water conveyance pipeline was about 7403.6 m3/d during the construction period. The groundwater level in the reservoir area could recover after a short drop, which had little effect on the surrounding vegetation. The groundwater quality was affected obviously because the migration speed of contaminants was very fast under abnormal conditions. During the operation period, it had little effect on groundwater level and had certain influence on groundwater flow field in local area. The source of sewage was mainly a small amount of domestic sewage, which could be ignored after taking anti-seepage measures. After storing water in the reservoir area, there was a possibility of small-scale immersion on the right bank. Most of the reservoirs had good stability conditions but the stability of the upper fault valley was poor; however, the possibility of leakage was very small. Overall, the project had little impact on the surrounding environment. The research results could also provide some references for other hydroelectric projects within the basin. View Full-Text
Keywords: water conservancy project; environmental effects; water inflow; contaminant migration water conservancy project; environmental effects; water inflow; contaminant migration
►▼ Show Figures 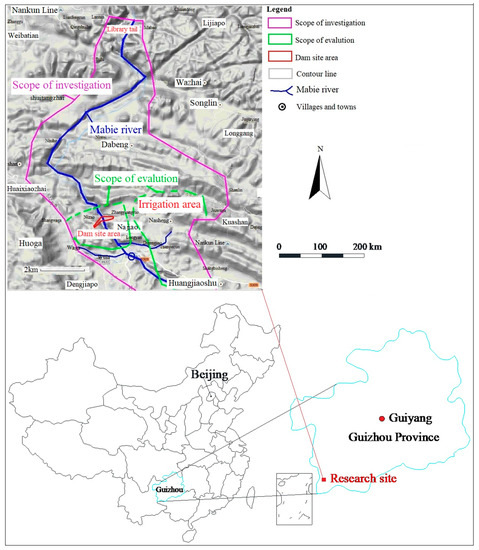