Drought is considered as one of the most significant natural disasters typically resulted from a climatic-induced anomaly of significantly decreased water availability over a certain period of time [1]. Serious drought condition can exert severe and disastrous damage to socio-economic activities, ecosystems, and humanity [2,3]. In recent years, droughts are generally expected to increase in both severity and frequency [4] due to climate change. There is no universal definition of drought [5], but it is basically categorized into meteorological drought, hydrological drought, agricultural drought, and socio-economic drought [5,6]. All definitions are determined on the basis of the insufficient moisture condition caused by a deficit in precipitation over a certain period [7,8,9,10]. However, a meteorological drought may develop quickly and end abruptly, and is generally an indicator of other types [11].
Drought monitoring is essential to risk management and is normally monitored by employing drought indices, which provide a quantitative assessment to identify drought occurrence, severity, and magnitude over a region. A variety of drought indices [12,13,14,15] have been developed and applied over the past decades. These include the Palmer Drought Severity Index (PDSI) [16], the Percent of Normal (PN) [17], Z-Score [18], the Standardized Precipitation Index (SPI) [19], the Surface Water Supply Index (SWSI) [20], the Standardized Precipitation Evapotranspiration Index (SPEI) [13], the Reconnaissance Drought Index (RDI) [21], Effective Drought Index (EDI) [22], Standardized Moisture Anomaly Index (SMAI) [23], and some other remote sensing based indices [24,25,26,27]. More detailed information about these indices are listed in Table 1.
Droughts are complex because of their causation and impact, so no index is expected to be universally suitable and can sufficiently characterize the complicated drought conditions in a comprehensive manner. Previous studies have demonstrated the advantages in employing more than one index for drought evaluation [28,29]. China is one of the most vulnerable countries to frequent and severe droughts. According to statistical analyses by He et al. [30], 60% of China has experienced various types of meteorological hazards. With the impact of global warming, droughts are gaining increased attention [31,32].
The Wuyuer Basin is located in Northeastern China, with an area of 23,110 km2. It is one of concentrative and extensive distribution area of inland wetlands in China, with a Ramsar wetland (i.e., Zhalong wetland) located at the downstream of the basin. Water supply is vital for agriculture and wetland ecosystems in this basin. Spatial-temporal changes of temperature and precipitation, which may result in drought and floods, has been reported in the basin [33]. A better understanding of droughts is essential to service for the water management and wetland protection in this area. A more detailed investigation to evaluate the performance and inherent properties of drought indices is imperative and has a special priority in this basin. Therefore, the objective of this study is to (1) identify correlations among DIs for various time scales, and (2) investigate their performances in drought monitoring. The results of this study can provide valuable information for drought monitoring and water resources management in the region.

The Wuyuer River originates from the west of the Lesser Khingan Mountains and travels a total length of 576 km with a drainage area of 15,084 km2. It flows through six counties, i.e., Bei’an, Kedong, Keshan and Baiquan, Yi’an, and Fuyu, before draining to Zhalong Wetland. Zhalong wetland is one of the most important Ramsar international wetlands and supports diverse ecosystems and endangered wildlife species. Wuyuer River Basin (WRB) has a typical inland semi-arid climate and is the largest inland river in Heilongjiang province located in Northeastern China (Figure 1). It is dry and cold in winter, yet hot and rainy in summer. The annual total precipitation is about 500 mm, mainly concentrated during the period of June to September and it is the main source of the water for the WRB. Annual evapotranspiration in the WRB is 1110 to 1780 mm, much higher than the precipitation. WRB has a population of 1.7 million inhabitants, 1.24 million of which make their living from agriculture [33]. The water supplied by the river is recognized as crucial to agricultural irrigation and wetland health. With the effects of global climate change, more extreme hydro-meteorological events (especially droughts) are occurring in this area [34,35]. These pose severe threats to agriculture production and wetland conservation. However, droughts in WRB have been under studied and no comprehensive assessment is available. In this study we aim to provide a comprehensive drought assessment using four DIs (drought indices) with various timesteps.

Four precipitation-based DIs, Percent of Normal by Mean (PN), Z-Score, Standardized Precipitation Index (SPI), and Effective Drought Index (EDI), were selected in this study. Observed daily precipitation records were averaged by month and then were used to calculate DIs and multi-monthly precipitations.

The PN is a drought index that is well known for its simple calculation and effectiveness in describing droughts. It can be computed based on the following equation [17]: where xi is the observed precipitation value and is the average value of a certain period.

In brief, Z-Score is calculated as follows: where xi is the observed precipitation value and is the average value of a certain period, and σ is the standard deviation of the records.

The SPI was developed to determine the precipitation deficit and can be calculated with multiple timesteps [19].
When calculating the SPI, the long-term precipitation data was first fitted to a probability distribution. As proposed in previous studies [36,37], this study used the gamma distribution to fit the long-term precipitation data.
Then the fitted distribution was transformed to the standard normal distribution so that the SPI mean and variance are 0 and 1, respectively. A drought event occurs when the value of SPI is continuously negative and ends when the SPI becomes positive. More details about the calculation of SPI are available from some previous studies [36].

The EDI was proposed to provide an exact detection of occurrence and duration of droughts [21]. In contrast to other indices, EDI is a function of ‘precipitation needed to return to normal’ (PRN) and is calculated with a daily time step [38]. Specifically, EDI is calculated as follows: where σ is the standard deviation of PRN values for a relevant period, and PRN can be obtained as: where EP represents effective precipitation.
Effective precipitation (EP) refers to the summation of all daily precipitation with a time reduction function. The EP for any day is a function of precipitation of the current day, as well as of previous days but with lower weights. It is calculated with the following equation:
N is the duration of summation and Pi is the precipitation of i–1 days ago. In this study, a value of 365 days is chosen as the duration [26].
In this study, only EDI was calculated for one timestep because it is determined as the mean condition of precipitation over a year. For all the other DIs, the monitoring period can be either a month, 3 months, a season or a year. Therefore, to make a further understanding of timesteps effects on drought monitoring, they were computed for 18 different timesteps, i.e., 1, 2, 3, 4, 5, 6, 7, 8, 9, 10, 11, 12, 15, 18, 24, 30, 36, and 48 months, respectively.

The comparison of droughts identified by PN and EDI is shown in Figure 4a. The frequency of identified severe droughts, moderate droughts, and mild droughts by EDI was, respectively, 2.5%, 9.3%, and 76.8% during 1960–2010, and no extreme drought was detected. However, the identified results of PN was very different, and the disparity became larger when the timestep increased. In general, the total percentage of droughts indicated by EDI (88.6%) was higher than that of PN for any timestep. Using the PN index, the basin was always (about 40%) in a normal or wet condition during 1960–2010. For PN with shorter timesteps (1–7 months), extreme (1.4–21.7%), severe (4.7–10.6%), and moderate droughts (17.7–25.1%) were overestimated when compared with EDI, but mild droughts (10.7–24.9%) had been underestimated. As the timestep went longer, less moderate droughts and more mild droughts were detected.

The Z-Score had a better consistency with EDI in drought identification than PN did (Figure 4b). Based on the results of the Z-Score with various timesteps, mild drought was the most frequent drought class between 1960 and 2010. The Z-Score with intermediate timesteps matched droughts identified using EDI most closely. For example, the frequency of extreme drought, severe drought, moderate drought, and mild drought identified by Z-Score9 was 0%, 1.99%, 9.27%, and 76.66%, respectively, similar to frequencies of 0%, 2.34%, 9.36%, and 76.76%, respectively, detected by Z-Score15. Further, these values were very close to the frequencies identified using EDI. For Z-Scores with shorter timesteps, moderate droughts and normal conditions were underestimated when compared with EDI, but droughts in extreme, severe, and mild drought conditions had been overestimated. In addition, the Z-Scores with longer timesteps also overestimated the frequency of extreme droughts, but they performed very well in the identification of mild droughts. Therefore, longer timesteps in general generated more reliable Z-Score than those by shorter timesteps. However, intermediate timesteps matched EDI best.

Compared to PN and Z-Score indices, SPI is more consistent with EDI in drought estimation (Figure 4c) with relatively good performances for almost all timesteps. Again, estimations by SPI using intermediate timesteps were more reliable than other timesteps. SPI using shorter timesteps showed an exact estimation of mild droughts and normal-wet conditions as EDI did. However, the identification of other drought types was poor, with moderate droughts being underestimated while extreme droughts and severe droughts were overestimated. Generally, SPI with longer timesteps displayed a similar estimation with that with shorter timesteps. Interestingly, SPI24 greatly overestimated moderate droughts, but underestimated mild droughts when compared with EDI.
Based on the above analysis, PN showed higher variability with timesteps than Z-Score and SPI. This index was also found to be the least matched DI compared with the others. If PN is the only DI choice in this basin, shorter timesteps (1–3 months) are recommended. In contrast, the Z-Score and SPI yielded more consistent results with EDI. Especially with SPI, the variability was slight among the different timesteps. For either the Z-Score or SPI, DIs with intermediate timesteps in general provided the best matches to values generated using EDI.

Comparisons of numerical values of selected DIs using diverse timesteps and their relative applicability in drought detection for a particular period (September 1999 to May 2001) were conducted in the WRB. The results showed that timestep selection is as important as a particular DI in drought assessment. DIs with intermediate timesteps (7–18 months) were better correlated to each other and showed a better conformity. SPI was the most reliable drought indicator in the WRB, especially with timesteps of 10–12 months. Although inferior to SPI, the Z-Score was also a useful index, especially because of its simple calculation. EDI was found to be of high value and should be used with DIs because of its timestep-independence and high coherence with other DIs. However, PN was not recommended for use in determining drought in the WRB due to its poor performance in comparisons of drought class indications and, if used, should be limited to short timesteps if (less than three months). Based in the application of the DIs during an historical drought period, Z-Score and SPI were found to be more sensitive to multi-monthly cumulative precipitation changes with respect to monthly precipitation changes, while EDI can provide reasonable accuracy if only monthly precipitation data is used. DIs overall exhibited the best coherence using the 12-month timestep. These results indicate that additional studies should be conducted with various indices for different timesteps to reliably identify drought conditions, especially in combination with intermediate timesteps.

The authors are grateful to Christopher Martin Swarzenski for editing the manuscript prior to submission. 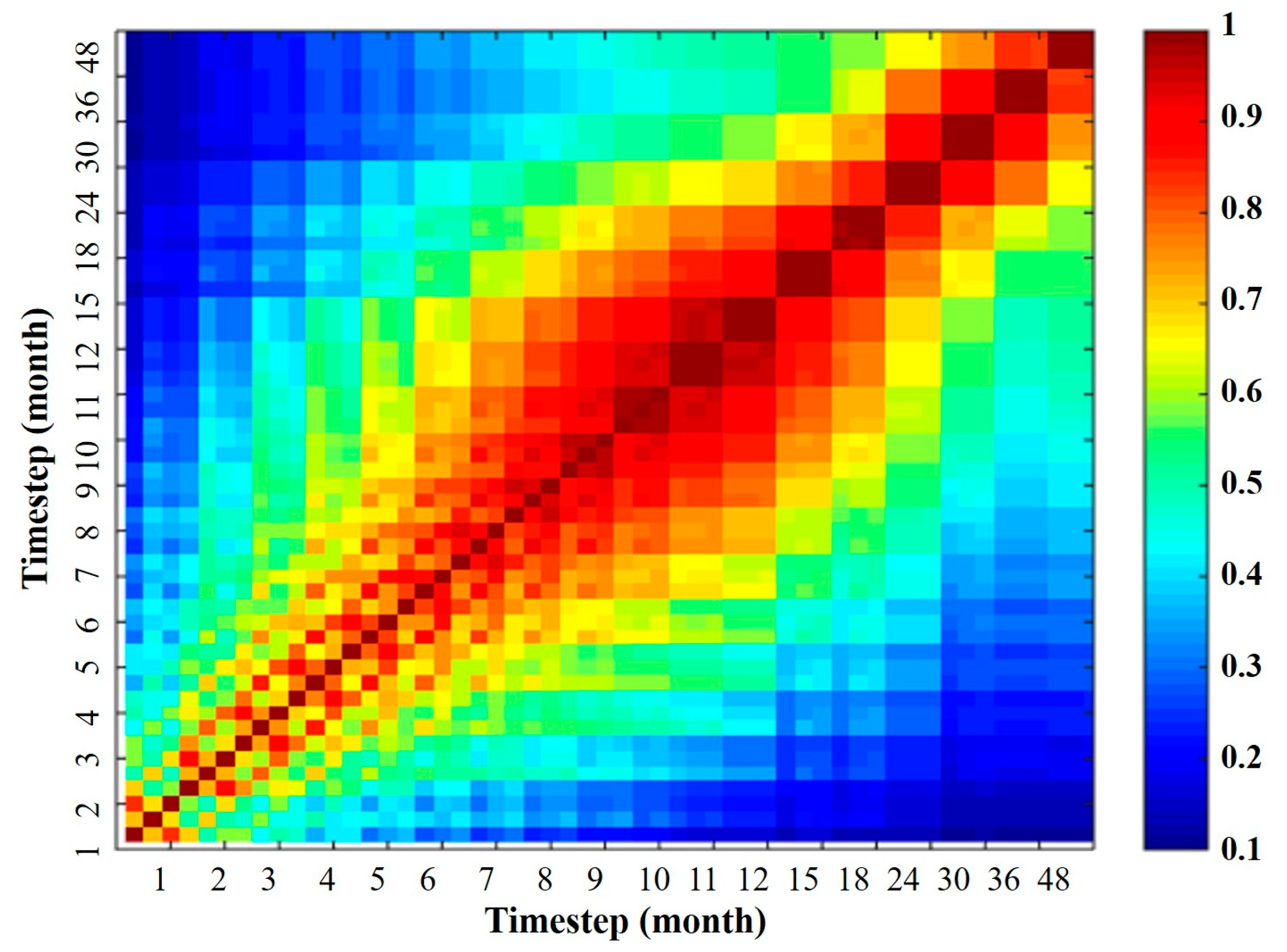 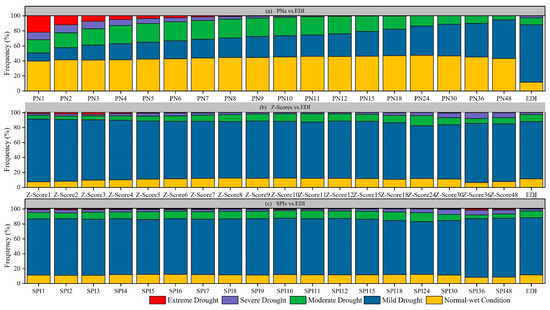 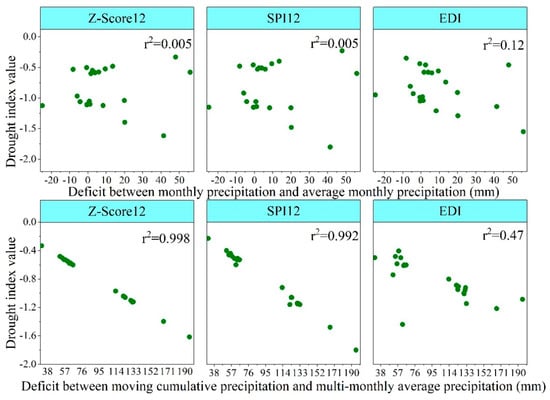 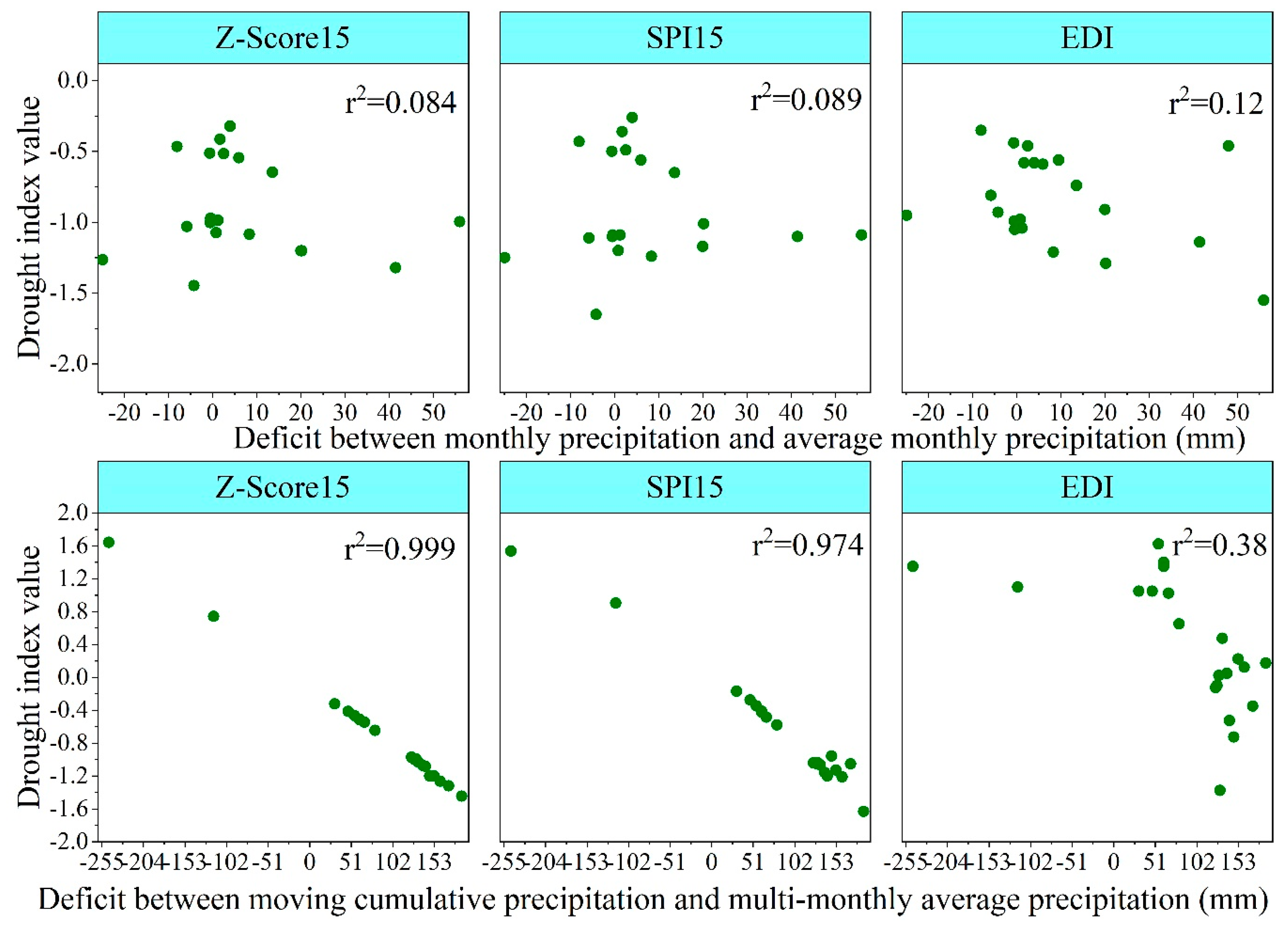