In China, the regional development policy has been shifting from solely economic orientation to ecologically sound economic growth. Using the Beijing-Tianjin-Hebei (Jing-Jin-Ji) region as a case study, we evaluated the temporal variations in ecosystem service values (ESVs) associated with land use changes from 1990 to 2015. We analyzed the dynamic relations between ESVs and the economy (indicated by the gross domestic product, GDP) by introducing the elasticity indicator (EI), which reflects the growth synchronism between the two, and the ecosystem service load (ESL), which reflects the ecological efficiency of economic growth. The results showed that the land use changes in Jing-Jin-Ji have been characterized by decreases in water areas, cropland, and grassland and increases in woodland and built-up areas. The ESVs of woodland and water areas contributed to 80% of the total ESV of the region, and the total ESV increased by 13.87% as a result of an area increase in woodland (26.87%). The average EI of Jing-Jin-Ji improved from 0.028 to 0.293 over the study period, indicating that the growth of ESVs was being balanced with the growth in the GDP. The average ESL decreased by 1.24, suggesting a significant improvement in ecological efficiency per unit GDP. Within the Jing-Jin-Ji region, large disparities in EI and ESL were shown to exist among Beijing, Tianjin, and Hebei owing to their differences in ecological resources, GDP compositions, and development levels. The study highlights the needs to reinforce woodland and water conservation, adjust economic structures, and balance the intraregional development to achieve the ecological-economic integrity of the region. View Full-Text
Keywords: ecosystem service value; land use change; elasticity indicator; ecosystem service load; Jing-Jin-Ji ecosystem service value; land use change; elasticity indicator; ecosystem service load; Jing-Jin-Ji
►▼ Show Figures 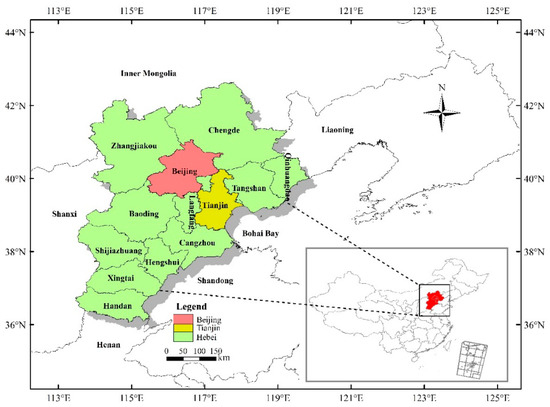