Urban expansion substantially alters the impervious areas in a catchment, which in turn affects surface runoff and sediment yield in the downstream areas. In this study, the Land Transformation Model (LTM) was used to forecast the urban land expansion in a catchment, whilst future land use maps were employed according to the Soil Conservation Service Curve Number method (SCS-CN) and the Modified Universal Soil Loss Equation (MUSLE) model, so as to examine the urbanization effects on runoff and sediment yield production respectively. Compared to pristine conditions, urban land is anticipated to increase from 6% in 1979 to 31% by 2027. The latter expansion pointed to an increase of peak discharge by 2.2–2.6 times and of flood volume by 1.6–2.1 times, with the sediment yield ranging between 0.47 to 1.05 t/ha for the upcoming 2027 period. Furthermore, the urban sprawl effects on all the latter variables were more profound during short duration storm events. Forecasting urban expansion through integrated artificial neural networks (ANN) and geographic information system (GIS) techniques, in order to calculate the associated design storm hydrograph and sediment yield, is of great importance, in order to properly plan and design hydraulic works that can sustain future urban development. View Full-Text
Keywords: LTM; urban expansion; ANN; SCS-CN; MUSLE LTM; urban expansion; ANN; SCS-CN; MUSLE
►▼ Show Figures 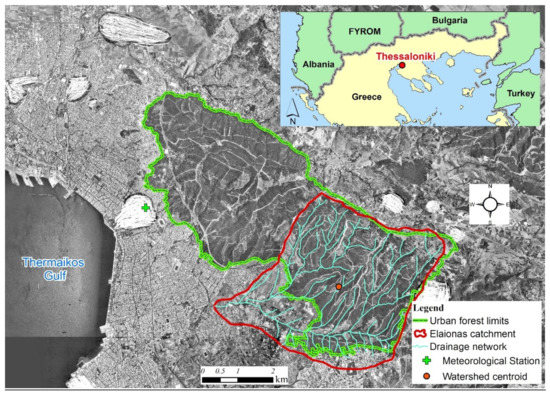