Water inrush is a geological hazard often encountered in tunnel construction. In order to overcome problems encountered when using the existing water-inrush simulation model test, such as single function, low repetition utilization rate, and poor visibility, we developed a multi-type water-inrush model test system. Our test system can be a precursor to large-scale studies, handle multiple types, and perform serialization and visualization. We conducted cavity water-inrush simulation testing using this device, and studied the failure model of aquifuge rock. We reveal the evolution laws of water inrush from the cavity, including the initiation of fracture in the aquifuge rock, the formation of water-inrush channels, and the rupture of the aquifuge rock. By analyzing the seepage pressure changes at the monitoring points of the aquifuge rock, we divided the water-inrush process of the cave into a rack generation stage, a holing-through of fracture and forming of water-inrush channel stage, and a water-inrush stage. Test results show that the system is stable and reliable, only requiring a short test period, and can be used to guide large water-inrush testing and related projects. View Full-Text
Keywords: karst aquifer; water inrush; hydraulic; model test; evolution law karst aquifer; water inrush; hydraulic; model test; evolution law
►▼ Show Figures 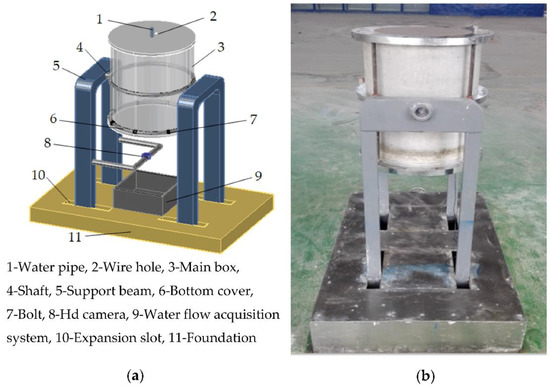