Quantifying Averted Disability-Adjusted Life Years as a Performance Indicator for Water Quality Interventions: A Review of Current Methodologies and Challenges
Next Article in Special Issue

A novel starch stabilized Mg/Al layered Double hydroxides (S-LDHs) was prepared in a facile approach and its fluoride ion removal performance was developed. Characterization of S-LDHs was employed by using X-ray diffraction (XRD), Fourier-transform infrared spectroscopy (FTIR), and particle size distribution. The adsorption property was studied through the assessment of the adsorption isotherms, kinetic models, thermal dynamics, and pH influence. The result shows that a low loading of starch of 10 mg onto layered double hydroxides (LDHs) could obviously improve the fluoride removal rate. The S-LDHs had three times higher the adsorption capacity to fluoride than that of Mg/Al LDHs to fluoride. The particle size was smaller and the particle size distribution was narrower for S-LDHs than that for Mg/Al LDHs. The Langmuir adsorption isotherm model and pseudo-second-order kinetic model fitted well with the experimental data. In thermodynamic parameters, the enthalpy (ΔH0) value was 35.63 kJ·mol−1 and the entropy (ΔS0) value was 0.0806 kJ·mol−1K−1. The values of ΔG0 were negative, implying the adsorption process is spontaneous. S-LDHs reveals stable adsorption property in a wide pH range from 3 to 9. The mechanism for fluoride adsorption on S-LDHs included surface adsorption and interaction ion exchange. View Full-Text
Keywords: layered double hydroxides; hydrotalcite; starch; fluoride; adsorption property; thermodynamics layered double hydroxides; hydrotalcite; starch; fluoride; adsorption property; thermodynamics
►▼ Show Figures 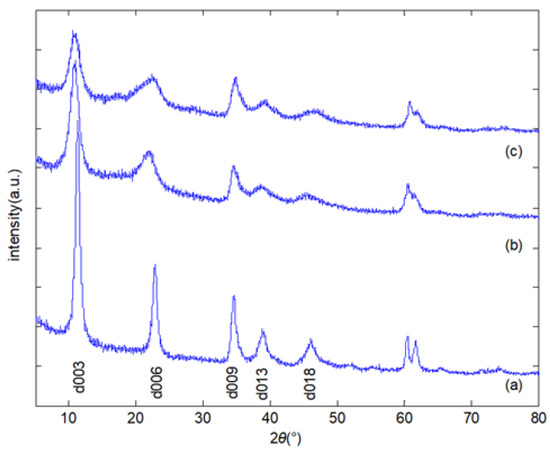