The general formulation of a BLP problem is as follow [25]:

The solving steps of FMDBLP are as following:
The ULDM problem
, are the objective function and constraint of the UL, respectively. First, the individual best solution () and individual worst solution () of (5) are found, where
This data can then be formulated as the following membership function of fuzzy set theory [27]:
Figure 2 represents the schematic diagram of Equation. It was as following:
Then, building the following mixed Tchebycheff model based on Equation (7):
The solution of the ULDM, can be solved by the model (8).
The LLDM problem
, are the objective function and constraint of the LL, respectively. By the same way of ULDM determination, we can get the solution of the LLDM, .
FMDBLP problem
The solution of ULDM and LLDM is disclosed above. However, two solutions are usually different due to the nature between two levels of objective functions. Therefore, it is unreasonable to use the optimal decision , which is from ULDM, as a control factor for the LLDM. It is more reasonable to have some tolerance that gives the LLDM an extent feasible region to search for its optimal solution.
Therefore, the range of decision variable should be around , with maximum tolerance and the following membership function specifying as: where presents the most preferred solution; and are the worst acceptable decision; and that satisfaction is linearly increasing with the interval of and linearly decreasing with , and other decisions are not acceptable.
Then, the membership function of the HLDM is as follows: and is presented graphically as follows (Figure 3):
where , . is the solution of LLDM.
The membership function of the LLDM is as following:
Figure 4 represents the schematic diagram of Equation (12). It was as following:
where , . is the solution of ULDM.
Finally, the FMDBLP model can be described as: where is the overall satisfaction and I is the column vector with all elements equal to 1. By solving model (13), the optimal solution of FMDBLP is reached.

In order to solve fuzzy problem quantitatively, the trapezoidal linear function, which was an effective solution for fuzzy problems, was introduced into the FMDBLP model. Therefore, the fuzzy max–min decision bi-level fuzzy programming model was developed for solving the bi-level problems with fuzzy problems. The FMDBLFP model can be described as:

The research area is located in Wuwei City (101°49′–104°16′ E, 36°29′–39°27′ N), Gansu Province, China (Figure 5), located to the north of Qilian Mountain and south of Desert Tenggeli. Wuwei’s annual rainfall is about 60–610 mm and the annual evapotranspiration is about 1400–3040 mm. Wuwei is one of the most arid areas in China, whose main water supply is dependent on Shiyang River and groundwater.
Recently, the water shortage of Wuwei city has become more and more serious due to the slow decrease of river runoff, the policy of protecting ecological environment by restricting groundwater exploitation, and the increase of water demand for repairing the ecological environment in Shiyang downstream. However, irrigation is the largest water consumer and even accounts for about 88.28% of Wuwei’s total water consumption. Thus, the water competing conflict among multi-water competing sectors in Wuwei city for limited water resources becomes more and more serious, especially water competing conflict between irrigation and the rest of water users. Moreover, in order to achieve sustainable development of Wuwei city, the government wants to cut down farmland and irrigation water for saving water resources for other water users, aiming at maximizing the net benefit of the government’s objective. However, the farmers will suffer great losses. Therefore, there is great conflict between the government’s objective (the upper level) and the farmers’ objective (the lower level) about the allocation of limited water resources. Therefore, it is important for the decision-makers to make a water resources allocation plan, which can not only allocate the limited water resources efficiently but also deal with the conflict among water competing sectors from different levels. Considering the possible uncertainties existing in the water resources optimal allocation, this paper established a fuzzy max–min decision bi-level fuzzy optimal allocation model for Wuwei city. This model can allocate water resources efficiently and deal with water competing conflict between the government’s objective (the upper level) and the farmer’s objective (the lower lever), in conjunction with surface and groundwater, food security, and other factors.
Figure 6 represented the schematic diagram of the developed FMDBLFP model.

In the process of solving the developed FMDBLFP model, the optimal results of the ULDM and LLDM can be got, which just made upper-level (maximum economic benefits) and lower-level (maximum yields) objectives as the optimization objectives, respectively. Figure 9 and Table 5 represent the optimized yields and optimized net benefits of the developed FMDBLFP, ULDM, and LLDM under different levels. From the figure and table, the optimized results of the three models had the same tendency under different levels. As levels increased, the upper-bound of optimized yields and net benefits decreased, while the lower-bound of yields and net benefits increased. For example, the upper-bound yields of ULDM would vary from 119.47 × 104 t () to 108.32 × 104 t (), while the lower-bound yields of ULDM would vary from 95.32 × 104 t () to 101.41 × 104 t (). However, there were great differences in the optimized yields and net benefits obtained by the three models. From Figure 9, the optimized yield of ULDM was largest under each level. Furthermore, Table 5 shows that the optimized economic benefit of LLDM was largest under each level. In addition, regardless of yields or economic benefits, the optimized result of FMDBLFP was always between ULDM and LLDM. For example, the optimized yields of LLDM, FMDBLFP, and ULDM were [114.30 × 104 t, 126.75 × 104 t], [101.78 × 104 t, 114.21 × 104 t], and [98.85 × 104 t, 112.76 × 104 t], respectively, when . When , the optimized economic benefits of ULDM, FMDBLFP, and LLDM were [384.98 × 108 yuan, 381.60 × 108 yuan], [384.67 × 108 yuan, 381.12 × 108 yuan], and [268.14 × 108 yuan, 264.80 × 108 yuan], respectively. Based on the above analysis, the ULDM just satisfied the requirement of upper level but caused great loss to the lower-level, while the LLDM also just satisfied the requirement of lower-level but caused great loss to the upper-level. However, the optimized yields and economic benefits of FMDBLFP were always between ULDM and LLDM, which meant that it took the requirements of upper and lower levels into account. Moreover, it demonstrated that it has the ability to deal with water competing conflict among water competing sectors from different levels.
Based on the above analysis, the FMDBLFP model has a significant and positive influence over the sustainable development of Wuwei city. In real-world problems, it is a complex problem of water allocation, which involves water competing sectors from different levels. The developed model has the ability to resolve the conflicts by paying attention to objectives of the upper and lower levels, while the other studies just focused on maximum net benefits or minimum system costs. It has great positive effects on sustainable development by reasonably dealing with the conflicts among water competing sectors from different levels during the course of development at water-scarce regions.
Furthermore, a range of optimal schemes of water resources and irrigation area under different levels have been offered by the FMDBLFP model. Different levels represent different possibility levels of fuzzy sets, from which the decision-makers can choose sound decision schemes from all the optimal schemes.

This research was supported by the Fundamental Research Funds for the Central Universities (300102298306) and National Natural Science Foundation of China (51379014). 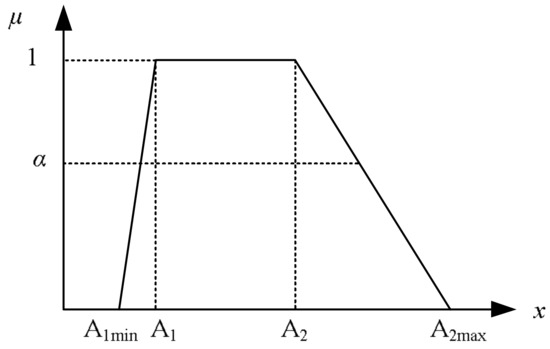 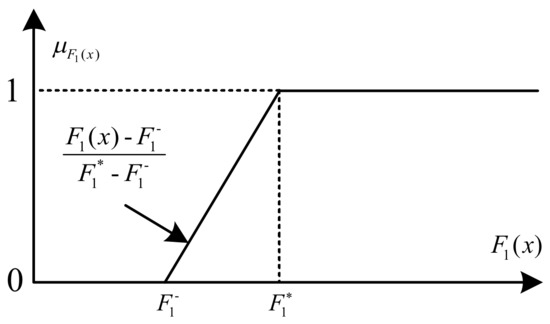 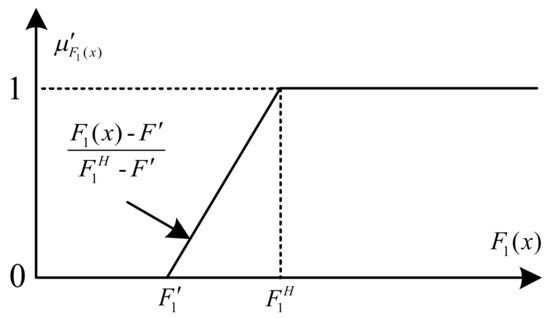 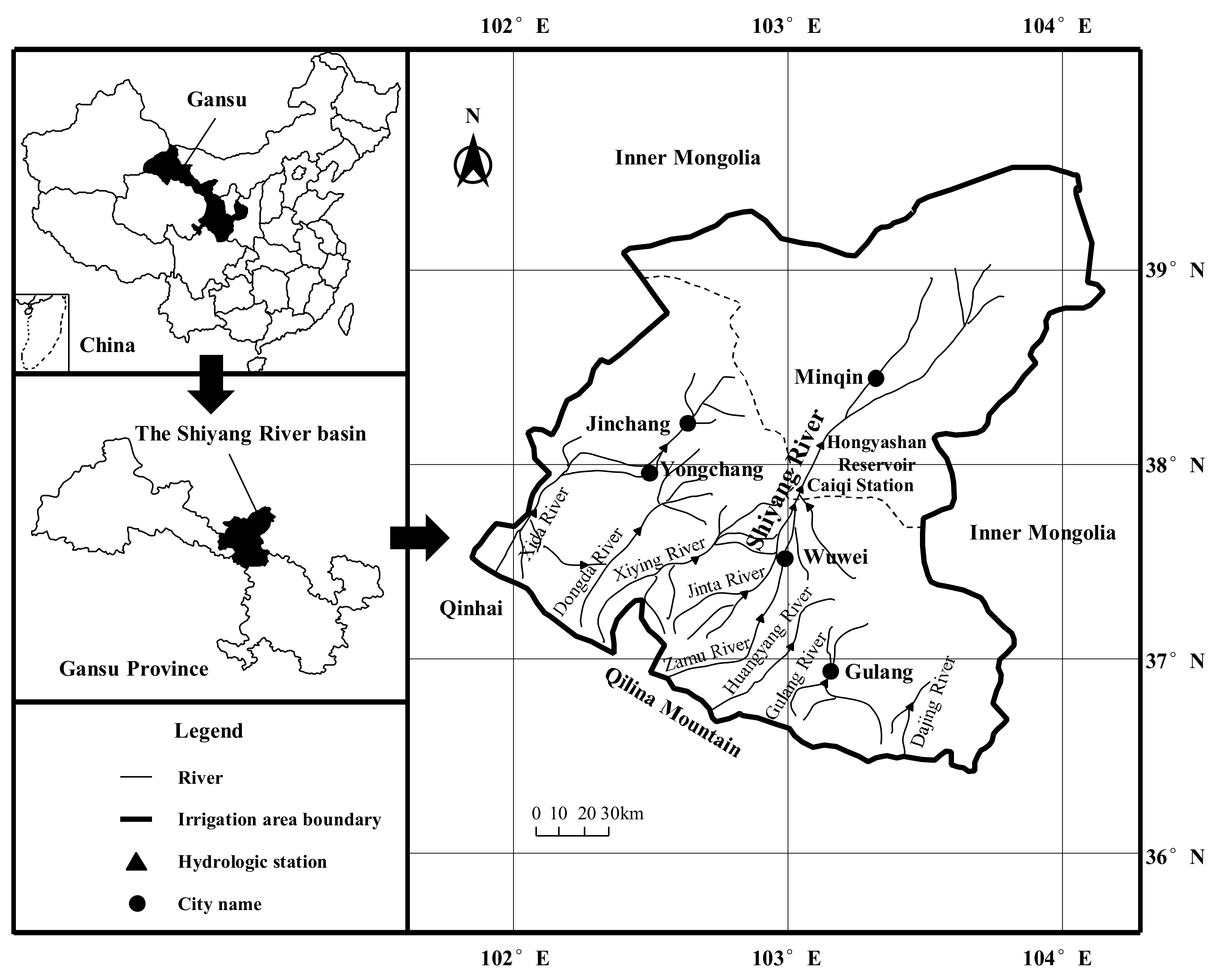 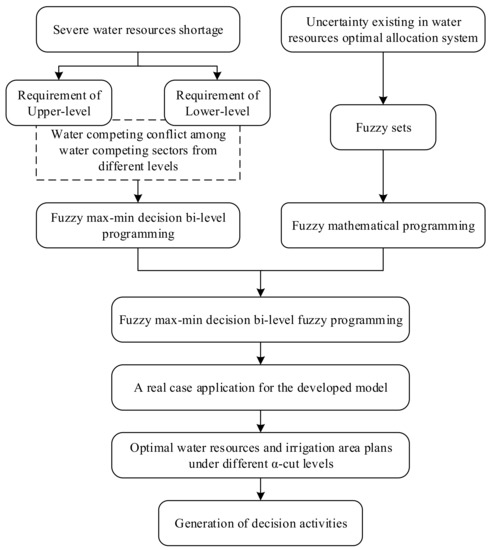 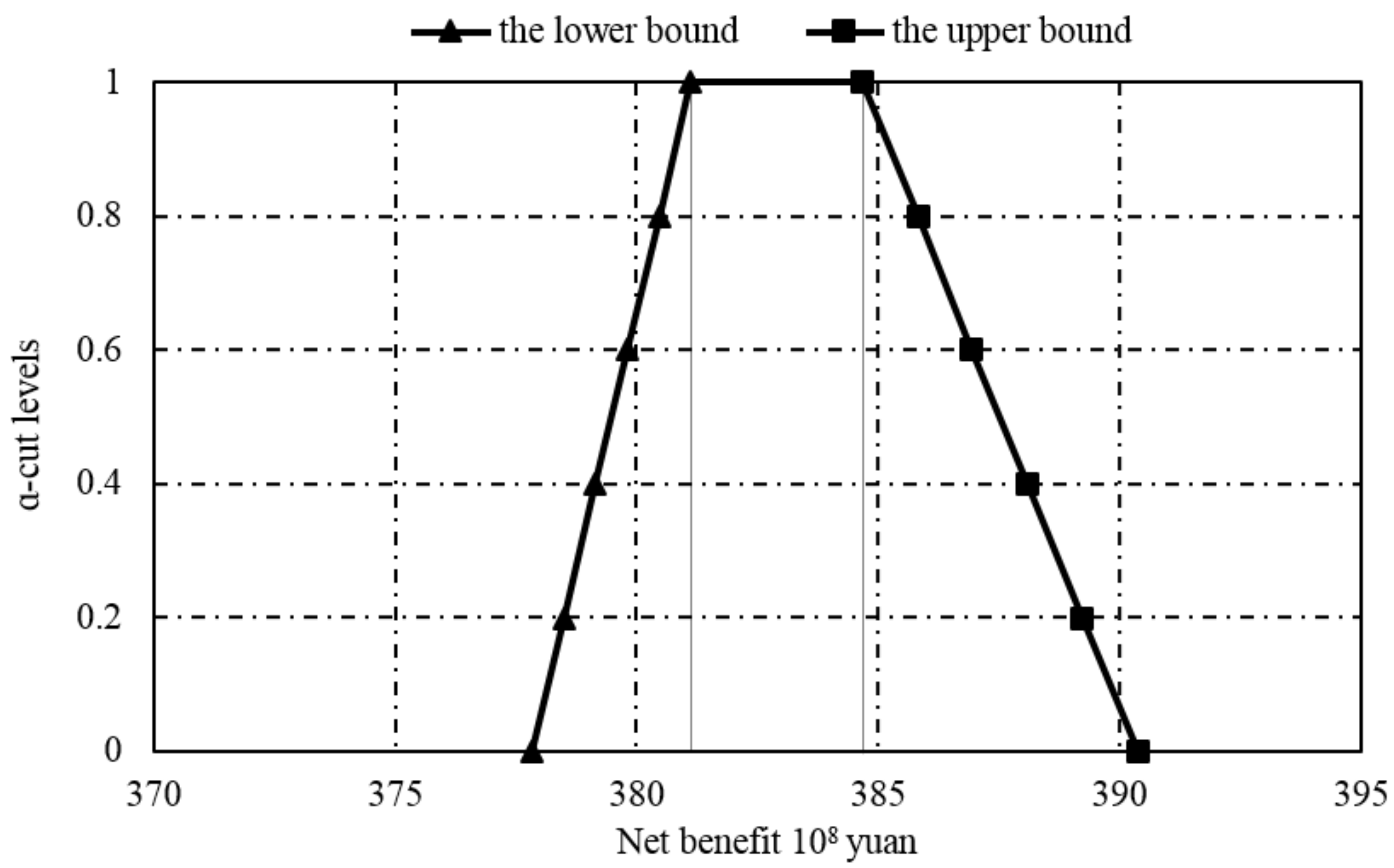