Evaluation of Groundwater Quality in the Vicinity of Khurrianwala Industrial Zone, Pakistan
Previous Article in Journal

The Mediterranean basin contains many semi-arid environments where aquifers are subject to intensive exploitation, generally to meet irrigation demands. The Campo de Cartagena aquifer is a clear example from such a semi-arid environment, and its hydrodynamic effects have aroused great scientific interest. The main objective of this study is to evaluate the hydrodynamic effects that have occurred in the last century of anthropogenic activity in this aquifer system. This aquifer is subject to intensive exploitation and shows clear deficits in times of drought, with recharge by irrigation playing an important role. This study’s methodology includes groundwater modelling to reconstruct the transient evolution of the aquifer system during the last century, to generate water balances and to illustrate how the evolution of irrigation has, in many ways, changed the aquifer’s groundwater flow pattern. The results delineate the hydraulic communication of the aquifer stratums through specific geological structures, as well as the flow transfer from the Quaternary layer to the Mar Menor and the Mediterranean Sea. The reconstruction of the entire system’s temporal evolution shows a fragile water balance that is supported by surface-water contributions. View Full-Text
Keywords: groundwater flow; numerical modelling; MODFLOW; multilayer aquifer; Campo de Cartagena groundwater flow; numerical modelling; MODFLOW; multilayer aquifer; Campo de Cartagena
►▼ Show Figures 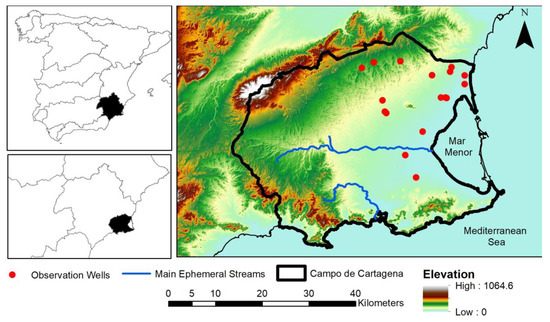