Detecting Coastline Change with All Available Landsat Data over 1986–2015: A Case Study for the State of Texas, USA

The Beibu Gulf is an important offshore region in the South China Sea for the fishing industry and other human activities. In 2017, typhoons Doksuri and Khanun passed the Beibu Gulf in two paths, at maximum wind speeds of up to 50 m/s. Typhoon Doksuri passed the Beibu Gulf through the open waters of the South China Sea and Typhoon Khanun moved towards the Beibu Gulf through the narrow Qiongzhou Strait. The aim of this study is to analyze the typhoon-induced wave distribution in the Beibu Gulf. WAVEWATCH-III (WW3) is a third-generation numeric wave model developed by the National Oceanic and Atmospheric Administration (NOAA), which has been widely used for sea wave research. The latest version of the WW3 (5.16) model provides three packages of nonlinear term for four wave components (quadruplets) wave–wave interactions, including Discrete Interaction Approximation (DIA), Full Boltzmann Integral (WRT), and Generalized Multiple DIA (GMD) with two kinds of coefficients, herein called GMD1 and GMD2. These four packages have been conveniently implemented for simulating wave fields in two typhoons after taking winds from the European Centre for Medium-Range Weather Forecasts (ECMWF) at 0.125° grids as the forcing fields. It was found that the GMD2 package was the recommended option of the nonlinear term for quadruplets wave–wave interactions due to the minimum error when comparing a number of simulated results from the WW3 model with significant wave height (SWH) from ECMWF and altimeter Jason-2. Then the wave distribution simulated by the WW3 model employing the GMD2 package was analyzed. In the case of Typhoon Doksuri, wind-sea dominated in the early and middle stages while swell dominated at the later stage. However, during Typhoon Khanun, wind-sea dominated throughout and swell distributed outside the bay around the east of Hainan Island, because the typhoon-induced swell at mesoscale was difficult to propagate into the Beibu Gulf through the narrow Qiongzhou Strait. View Full-Text
Keywords: wave distribution; typhoon; WAVEWATCH-III; Beibu Gulf wave distribution; typhoon; WAVEWATCH-III; Beibu Gulf
►▼ Show Figures 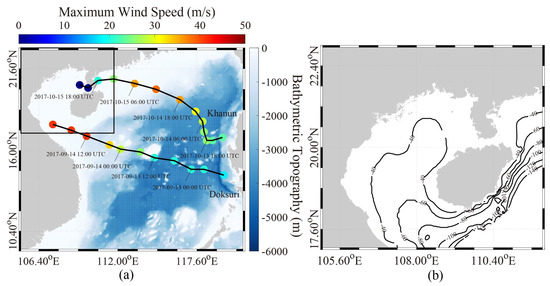