Detecting Coastline Change with All Available Landsat Data over 1986–2015: A Case Study for the State of Texas, USA

Coastline change often results from social and natural factors, such as human activities in the coastal zone, long-term and short-term sea level change, hurricane occurrences, subsequent recovery, and so on. Tracking coastline change is essential to deepen our understanding of coastal responses to these factors. Such information is also required for land use planning and sustainable development of coastal zones. In this context, we aimed to collect all available Landsat data (TM: Thematic Mapper, ETM+: Enhanced Thematic Mapper Plus and OLI: Operational Land Imager) over 1986–2015 for tracking the coastline dynamic and estimating its change rate in the State of Texas, USA. First, the land vs. water maps at an annual scale were derived from the satellite images. The border between land and water represents the coastline in this study. Second, the annual land area was obtained to characterize the coastline dynamic and a linear regression model was used for estimating the change rate. We also analyzed the potential driving factors of the observed coastline change. The results reveal that the coastline in the State of Texas changed at a rate of −0.154 ± 0.063 km2/year from 1986 to 2015, which indicates that the coastline has mainly experienced an erosion over the past three decades. Specifically, 52.58% of the entire coastline retreated to the land while a 47.42% portion advanced to the ocean. Long-term sea level rise can result in the erosion of coastline. Hurricane occurrences can explain the relatively strong coastline erosion. Besides, significant difference between the coastline change rate with a higher curvature and a lower curvature was observed. This study establishes a general method for detecting coastline change at large spatial and long-term temporal scales, by using remote sensing that can give fundamental information on coastline change. This is important for making scientific and reasonable policies of sustainable development of coastal zones. View Full-Text
Keywords: coastline change; beach; sea level; hurricane; remote sensing; State of Texas coastline change; beach; sea level; hurricane; remote sensing; State of Texas
►▼ Show Figures 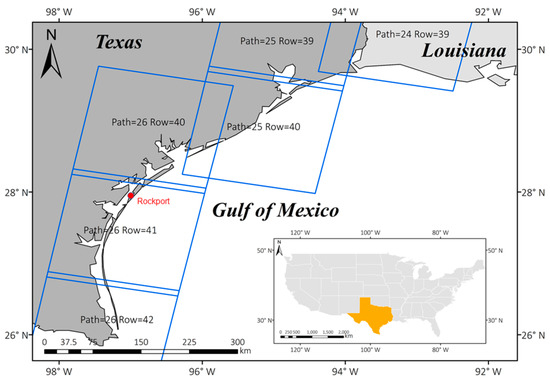