Numerous scientific studies have indicated the influence of weather on human health, especially on the cardiovascular system. Air temperature is the main meteorological factor whose effect on the human cardiovascular system has been proven undisputedly [1]. A negative effect of cold air on the human body has been stated: acute exposure to cold increased plasma cholesterol level, plasma fibrinogen, blood pressure, and red and white blood cell counts [2,3,4]. Another weather variable that has been associated with the human cardiovascular system is barometric pressure (BP). BP in the biosynoptic analysis seems to be the most objective meteorological factor having the same influence on us—indoors and outdoors. The decrease in BP reduces blood oxygenation and pulse rate [5], is associated with a higher blood pressure [6,7], and associated with a higher risk of adverse cardiovascular events [8,9]. We failed to find any experiment-based studies in the effect of relative humidity or wind speed on human physiological indices. However, thermal indices combining air temperature, relative humidity, and wind speed have been used [10].
Arterial hypertension (AH) is one of the main risk factors of cardiovascular diseases and unfavorable prognosis [11]. AH is the result of various environmental, genetic, and behavioral (or lifestyle) factors as well as the expression of those factors in the human body. Over the last five years, many studies have been published on the effects of environmental factors on blood pressure [12]. An increase in blood pressure has been associated with cold [13,14], seasonal variations [3,15], short- and long-term exposure to fine particulate matter [16,17], traffic noise [18], and increased geomagnetic activity [19,20].
Blood pressure rises sharply in response to the increased activation of the sympathetic nervous system [21]. In most individuals, blood pressure presents a morning increase, a small postprandial valley, and a deeper descent during nocturnal rest [22]. In the early morning, the heart rate, plasma cortisol levels, vascular tone, blood viscosity, and platelet aggregation increased, while vagal activity decreased [23]. Data from epidemiological studies have shown that pathological states are also influenced by circadian fluctuations [24]. Activation of the sympathetic nervous system and secretion of catecholamine increased in response to cold temperatures [25]. This could result in an increase in blood pressure through an increased heart rate and peripheral vascular resistance [26,27]. Several studies report a negative correlation between heart rate variability (HRV) and the level of geomagnetic activity [28,29]. The reduction in HRV could be related to the response of the autonomic nervous system to changes in geomagnetic activity, which can be either sympathetic or parasympathetic in particular individuals [30]. Measurements of arterial blood pressure and heart rate showed an increased activity of the parasympathetic nervous system in zero magnetic fields [31]. Based on the above results, it can be summarized that the mechanisms that could explain the association between blood pressure and the abovementioned environmental variables are associated with an increase in the activation of the sympathetic nervous system. Thus, the reaction to environmental triggers such as weather patterns and geomagnetic activity may vary during different periods of the day.
In Kaunas city’s emergency ambulance service, about 38.4% of the emergency ambulance calls (EACs) for cardiovascular diseases were because of elevated arterial blood pressure (EABP) (ICD-10 codes I10–I15). According to the multivariate model in our previous work [32], the risk of EACs was negatively correlated with air temperature and barometric pressure with a lag of 2 days, and the negative impact of a higher wind speed was dependent on the air temperature. We hypothesized that (1) the variations in the mean daily weather variable during the period of the week affect the risk of EACs; and (2) weather and space weather variables, especially air temperature and geomagnetic activity, might have different impacts on the risk of EACs during different periods of the day.
The aim of the study was to detect the complex association between the daily EACs for EABP occurring in the morning until the early afternoon (8:00–13:59), in the afternoon until the evening (14:00–21:59), and at night until the early morning (22:00–7:59); and short-term environmental conditions: air temperature (T), barometric pressure (BP), relative humidity (RH), wind speed (WS), day length, geomagnetic activity (GMA), and high-speed solar wind (HSSW).

The study was conducted in Kaunas city, Lithuania, with a population of 306,000 inhabitants. The study was conducted from 1 January 2009 to 30 June 2011. The patients had essential hypertension and were administered antihypertensive medications by their family physicians. They were able to monitor their blood pressure and to evaluate the efficiency of the treatment at home. Such patients usually fill out their arterial blood pressure monitoring diary, where they indicate their arterial blood pressure. Ambulance calls were received from patients who, in the background of their usual antihypertensive pharmacological treatment, suddenly experienced a rise in arterial blood pressure by more than 20 mmHg and additional clinical symptoms such as chest pain, headache, dizziness, or other unusual symptoms. We selected patients whose clinical situation was evaluated by the ambulance crew as an exacerbation of essential hypertension accompanied by a substantial elevation of arterial blood pressure (code I.10–I.15). We analyzed the associations between the daily environmental conditions and the daily number of emergency ambulance calls for EABP during the periods of 8:00–13:59 (in the morning until before noon), 14:00–21:59 (in the afternoon until the evening), and 22:00–7:59 (at night until the early morning).
The Kaunas meteorological station provided daily records of minimal, maximal, and mean daily air temperature (T, °C), wind speed (WS, kt), and barometric pressure (BP, hPA) for the studied period (http://www.geodata.us/weather/). The mean daily relative humidity (RH, %) was obtained from the Kaunas international airport (EYKA) weather station. Daily Ap indexes were used as a measure of the level of geomagnetic activity. A day of HSSW was defined as a day with the mean value of solar wind speed of ≥600 km/s. Data on daily solar wind speed and Ap data were downloaded from the National Oceanic and Atmospheric Administration database (ftp://ftp.ngdc.noaa.gov/STP/SOLAR_DATA/).
As confounders, we used the daily concentrations of PM10, the highest eight-hour moving average of CO concentration, and the mean daily concentrations of ozone, as obtained from the municipal air quality monitoring system in the Dainava station. In this station, the concentrations of the pollutants were measured automatically on an hourly basis.

The daily number of EACs for EABP is presented as the mean value (standard error). The association between environmental variables and the daily number of EACs for EABP was evaluated by applying the Poisson regression, adjusting for years, the month of the year, day length, and the day of the week. In the analysis, we used the weather variables with a lag of 0–7 days. The terms of the weather variables were defined analogous to in our previous work [33]. We analyzed the impact of colder air TC,t = max(−1 − Tt, 0) and warmer air TW,t = max(Tt − 1, 0), where Tt is the air temperature on the day of the call. The thresholds for the cold effect and warm effect, respectively, TC = −1 °C and TW = 1 °C, were defined according to the graphical analysis of the associations between the mean daily air temperature and EACs for EABP in the previous work [32]. The terms of BP, WS, and RH were two-piece linear functions with thresholds equal to the median: BPL,t = max(1006 − BPt, 0), BPH,t = max(BPt − 1006, 0), WSL,t = min(WSt − 6.1, 0), WSH,t = max(WSt − 6.1, 0), RHL,t = min(RHt − 82, 0), and RHH,t = max(RHt − 82, 0); where BPt, WSt, and RHt are the barometric pressure, wind speed, and relative humidity, respectively, on the day of the call. To detect the impact of the air temperature, we included the variables TC,t−j and TW,t−j into the multivariate model for each of j = 0, 1, ..., 7 one by one, adjusting for years, the month of the year, the day of the week, and day length. To detect the impact of the weekly variations in other weather variables on the risk of EACs, we added them in the multivariate model one by one, and the unconstrained distributed time-lag threshold model was used. Based on the estimates of regression coefficients in each lag and on the results of the created distributed lag models (DLMs), we created new variables as moving averages or daily changes of weather parameters that were statistically significantly associated with EACs. The optimal delay was selected using the Akaike information criterion. We checked the autocorrelations of the residuals using partial autocorrelation functions for the created model.
The space weather variable was used as the categorical predictor. We assessed the impacts of low GMA of Ap < 4 (4 being the median of the Ap indices during the studied period) as well as active-stormy GMA (Ap ≥ 16); HSSW in conjunction with days of active-stormy GMA; and HSSW occurring after days of active-stormy GMA and 2 days after an active-stormy GMA level. We presented adjusted rate ratios (RRs) in the multivariate Poisson regression model created by including the selected environmental variables. The RRs are presented with a 95% confidence interval (CI) and p-value. The analysis was performed separately for the number of calls during the whole day, in the morning until before noon, in the afternoon until the evening, and at night until early in the morning. To detect significant differences in the impact of environmental variables during the different periods of the day, we tested the hypothesis about the difference between two regression coefficients. We used the statistic [34], where b1 and b2 are regression coefficients detected during different time periods and SE is the standard error. For a sensitivity analysis, we evaluated the association between EACs for EABP and environmental variables separately for older (>65 years) and younger patients. Statistical analysis was performed using SPSS 19 software.

We acknowledge the contribution of Kaunas city ambulances involved in the registration of cardiovascular emergency admissions and the formation of the computer database. 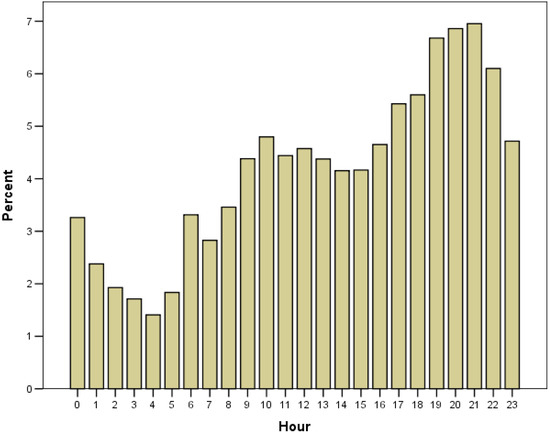 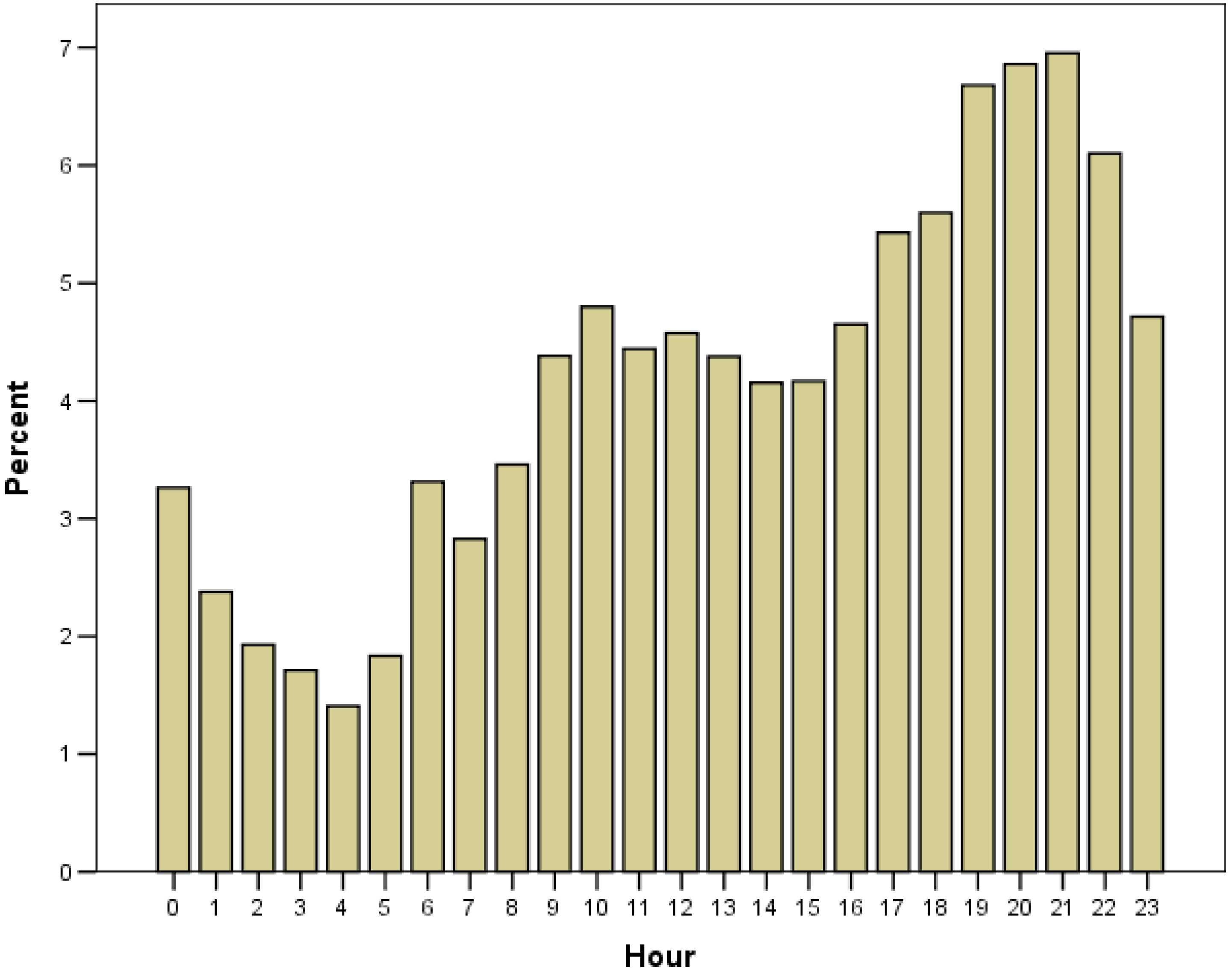 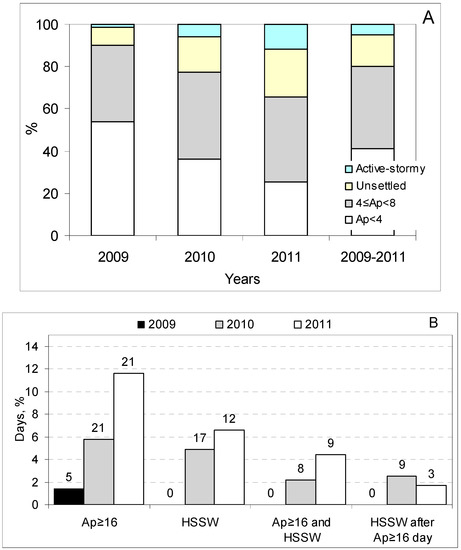 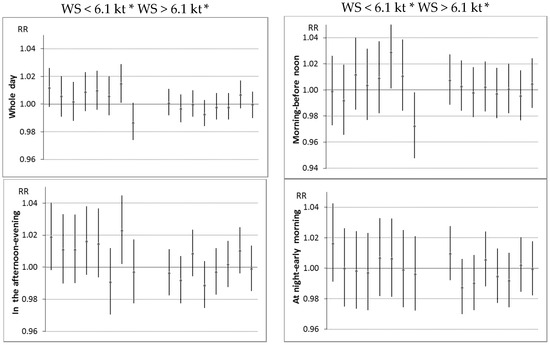 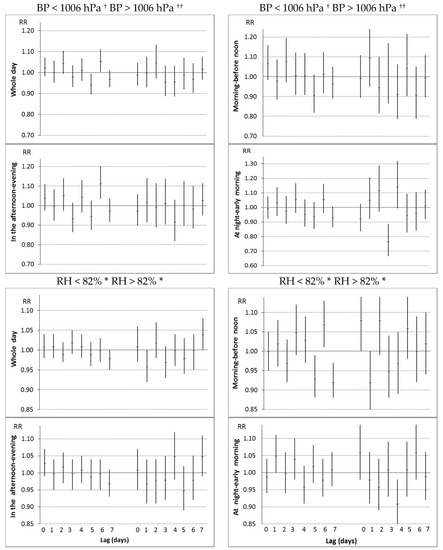 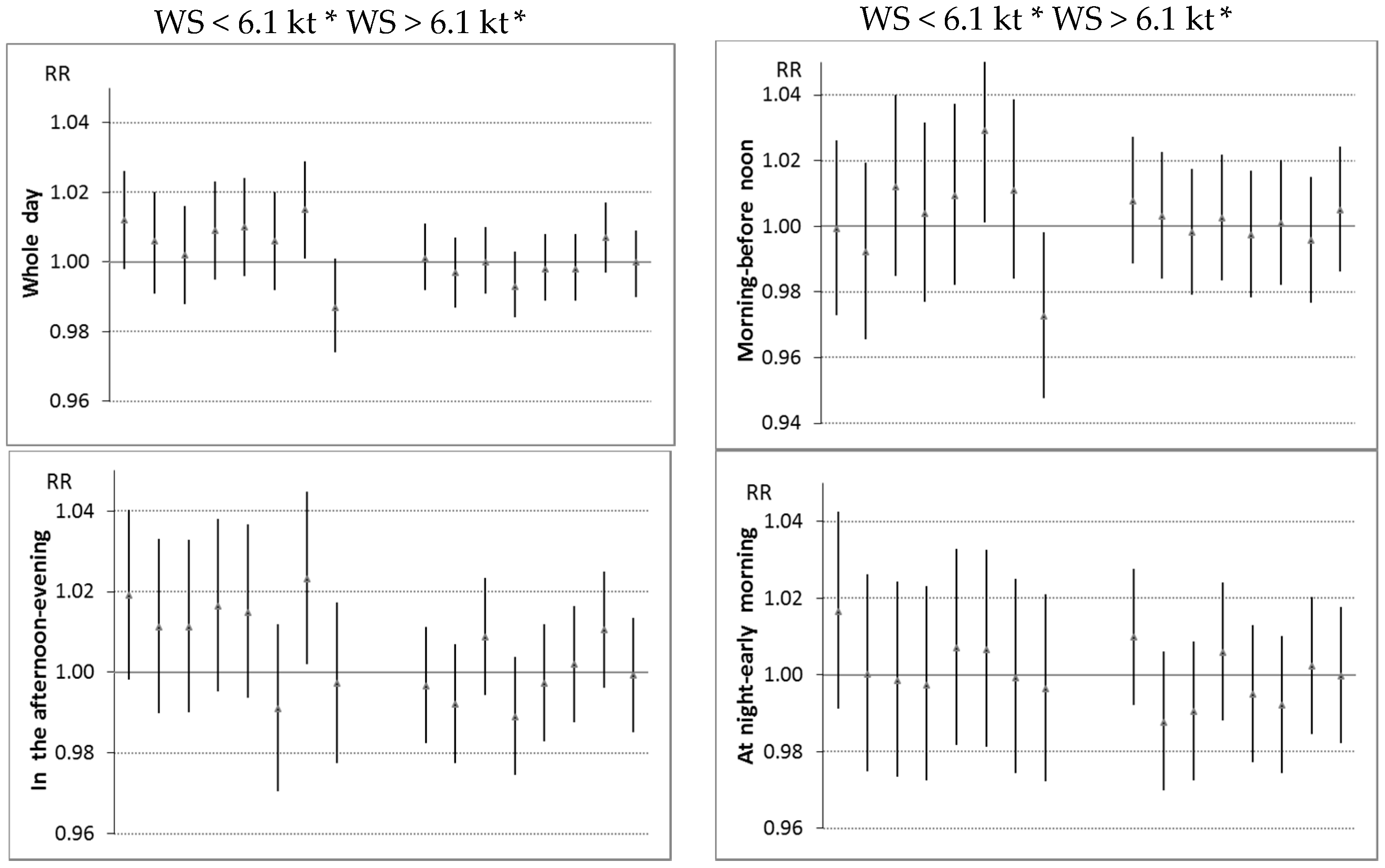