Variability and Mechanisms of Megadroughts over Eastern China during the Last Millennium: A Model Study
Previous Article in Journal

The Yangtze River Basin is an El Niño–Southern Oscillation (ENSO)-sensitive region, prone to floods and droughts. Hydrological records were collected to examine the temporal and spatial distribution of runoff in this drainage basin. An apparent difference in runoff variations between the upper and mid-lower Yangtze reaches was detected in response to ENSO. The upper basin usually experiences floods or droughts during the summer of ENSO developing years, while the mid-lower runoff variations tend to coincide with ENSO decaying phases. Composite analysis is employed to investigate the underlying mechanism for the teleconnection between the specific phases of the ENSO cycle and Yangtze runoff variation. Results show that the Western Pacific Subtropical High (WPSH) exhibits large variability on its western side in summer with different ENSO phases, thus resulting in a contrasting influence between the upper and mid-lower Yangtze floods and droughts. During the central Pacific-La Niña developing summers, the WPSH is significantly enhanced with its westward extension over the Yangtze upper basin. Anomalous water vapor converges in its northwest edge thus favoring upper-basin flooding. Meanwhile, the mid-lower reaches are controlled by the WPSH, and the local rainfall is not obvious. In addition, when the El Niño decaying phases occur, the WPSH denotes a westward extending trend and the position of its ridge line shifts to the mid-lower Yangtze reaches. The southwest moisture cannot extend to the upper basin but converges in the mid-lower basin. Accompanied by the anomalous 100 hPa South Asia High and lower-tropospheric Philippines anticyclone movements, this upper–middle–lower configuration acts as a key bridge linking ENSO and Yangtze floods and droughts. View Full-Text
Keywords: Yangtze River runoff; ENSO cycle; WPSH; interannual variations Yangtze River runoff; ENSO cycle; WPSH; interannual variations
►▼ Show Figures 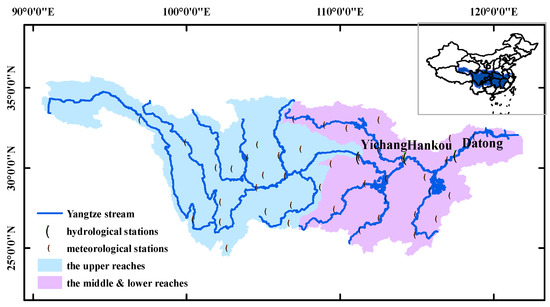