Ozone is a key trace gas in the troposphere; because it is a greenhouse gas, it is very reactive, and it is potentially toxic to humans, fauna, and vegetation. The main sink processes for ozone are chemical reactions and the turbulent deposition flux to the earth’s surface. The deposition process itself is rather complex: The interactions between co-varying drivers such as the tropospheric ozone concentration, turbulence, and chemical reactions are not well understood. In the case of ozone deposition to vegetation, another aspect that must be studied is the role of stomatal regulation for a wide range of conditions. Therefore, we measured turbulent deposition fluxes of ozone with the eddy covariance technique during the peak of the growing season in 2014 over a managed, rewetted peatland in NW Germany. The deposition flux was large during the day (up to −15 nmol m−2 s−1) and relatively small during the night (between −1 and −2 nmol m−2 s−1). Flux partitioning by applying the surface resistance analogy and further analysis showed that the stomatal uptake was smaller than non-stomatal deposition. The correction of stomatal conductance with the gross primary production (GPP) improved the estimation of day- and nighttime stomatal deposition fluxes. Statistical analysis confirmed that the friction velocity (u*) was the single most important driver of non-stomatal ozone deposition and that relationships with other environmental drivers are not linear and highly variable. Further research is needed to develop a better process understanding of non-stomatal ozone deposition, to quantify the role of surface deposition to the ozone budget of the atmospheric boundary layer, and to estimate uncertainties associated with the partitioning of ozone deposition into stomatal and non-stomatal fluxes. View Full-Text
Keywords: ozone deposition; turbulence; eddy covariance; peatland; greenhouse gases ozone deposition; turbulence; eddy covariance; peatland; greenhouse gases
►▼ Show Figures 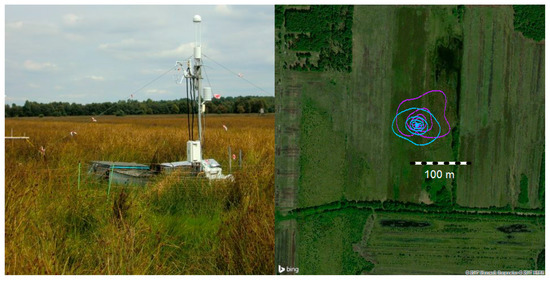