Indian Summer Monsoon and El Niño Southern Oscillation in CMIP5 Models: A Few Areas of Agreement and Disagreement
Next Article in Special Issue

Evaluation of the Common Land Model (CoLM) from the Perspective of Water and Energy Budget Simulation: Towards Inclusion in CMIP6

Deforestation, followed by abandonment and forest regeneration, has become one of the dominant types of land cover changes in the tropics. This study applied the eddy covariance (EC) technique to quantify the energy budget and evapotranspiration in a regenerated secondary dry dipterocarp forest in Western Thailand. The mean annual net radiation was 126.69, 129.61, and 125.65 W m−2 day−1 in 2009, 2010, and 2011, respectively. On average, fluxes of this energy were disaggregated into latent heat (61%), sensible heat (27%), and soil heat flux (1%). While the number of energy exchanges was not significantly different between these years, there were distinct seasonal patterns within a year. In the wet season, more than 79% of energy fluxes were in the form of latent heat, while during the dry season, this was in the form of sensible heat. The energy closure in this forest ecosystem was 86% and 85% in 2010 and 2011, respectively, and varied between 84–87% in the dry season and 83–84% in the wet season. The seasonality of these energy fluxes and energy closure can be explained by rainfall, soil moisture, and water vapor deficit. The rates of evapotranspiration also significantly varied between the wet (average 6.40 mm day−1) and dry seasons (3.26 mm day−1). View Full-Text
Keywords: energy fluxes; ecosystem evapotranspiration; young secondary dry dipterocarp forest energy fluxes; ecosystem evapotranspiration; young secondary dry dipterocarp forest
►▼ Show Figures 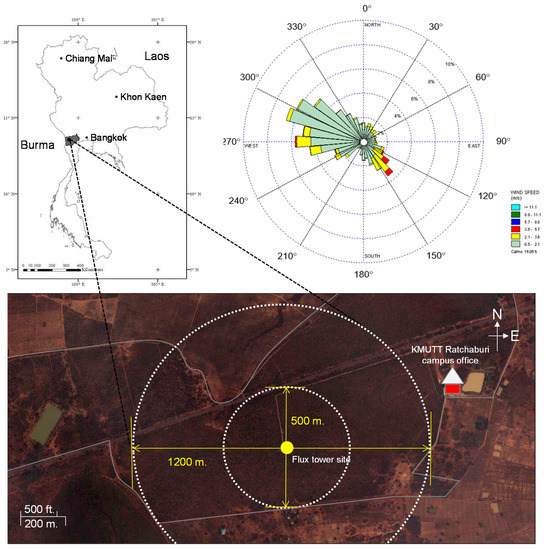