Evaluation of the Common Land Model (CoLM) from the Perspective of Water and Energy Budget Simulation: Towards Inclusion in CMIP6

Land surface models (LSMs) are important tools for simulating energy, water and momentum transfer across the land–atmosphere interface. Many LSMs have been developed over the past 50 years, including the Common Land Model (CoLM), a LSM that has primarily been developed and maintained by Chinese researchers. CoLM has been adopted by several Chinese Earth System Models (GCMs) that will participate in the Coupled Model Intercomparison Project Phase 6 (CMIP6). In this study, we evaluate the performance of CoLM with respect to simulating the water and energy budgets. We compare simulations using the latest version of CoLM (CoLM2014), the previous version of CoLM (CoLM2005) that was used in the Beijing Normal University Earth System Model (BNU-GCM) for CMIP5, and the Community Land Model version 4.5 (CLM4.5) against global diagnostic data and observations. Our results demonstrate that CLM4.5 outperforms CoLM2005 and CoLM2014 in simulating runoff (R), although all three models overestimate runoff in northern Europe and underestimate runoff in North America and East Asia. Simulations of runoff and snow depth (SNDP) are substantially improved in CoLM2014 relative to CoLM2005, particularly in the Northern Hemisphere. The simulated global energy budget is also substantially improved in CoLM2014 relative to CoLM2005. Simulations of sensible heat (SH) based on CoLM2014 compare favorably to those based on CLM4.5, while root-mean-square errors (RMSEs) in net surface radiation indicate that CoLM2014 (RMSE = 16.02 W m−2) outperforms both CoLM2005 (17.41 W m−2) and CLM4.5 (23.73 W m−2). Comparisons at regional scales show that all three models perform poorly in the Amazon region but perform relatively well over the central United States, Siberia and the Tibetan Plateau. Overall, CoLM2014 is improved relative to CoLM2005, and is comparable to CLM4.5 with respect to many aspects of the energy and water budgets. Our evaluation confirms CoLM2014 is suitable for inclusion in Chinese GCMs, which will increase the diversity of LSMs considered during CMIP6. View Full-Text
Keywords: land surface models; Common Land Model (CoLM); water; energy; CMIP6 land surface models; Common Land Model (CoLM); water; energy; CMIP6
►▼ Show Figures 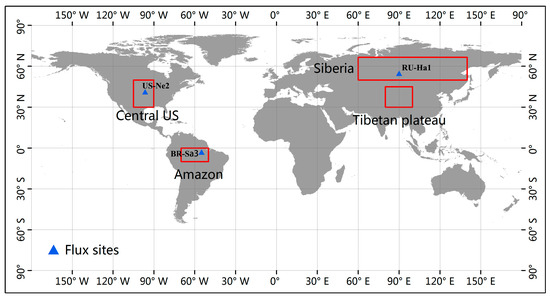