Monthly and Diurnal Variation of the Concentrations of Aerosol Surface Area in Fukuoka, Japan, Measured by Diffusion Charging Method

The monitoring site for the aerosol surface area, BC, and particle number concentrations was the fourth floor of a building of the Fukuoka Institute for Atmospheric Environment and Health (33.55° N, 130.36° E) at Fukuoka University, Japan [23,30,31,32]. Another monitoring site for the sulfate concentration was the Fukuoka Institute of Health and Environmental Science (33.51° N, 130.48° E). These two sites are ~15 km from each other. Fukuoka City is one of the largest cities in northern Kyushu district, which faces the Asian continent (Figure 1). Generally, sulfate concentrations in this area (northern Kyushu district) are mainly affected by a long-range transport, and exhibit very similar variation over the scale of hundreds of kilometers [30]. For example, sulfate in Fukue and Fukuoka showed very similar concentrations and variations even though these two sites are approximately 200 km from each other [30]. Therefore, we assume that the distance between these observational sites can be ignored. The area and population of Fukuoka City were approximately 340 km2 and 1.5 million, respectively. Aerosols observed in Fukuoka originate on the continent, the ocean, and in the local area. This site is therefore well situated for an examination of differences in aerosol surface area and chemical composition between aerosol sources. PM2.5 concentrations over this site are generally affected by the long-range transport process from the Asian continent [30,33]. The observation period was from 1 April 2015 to 31 March 2016.

The surface area concentration was automatically and continuously measured using an NSAM (Model 3550, TSI Inc., Shoreview, MN, USA). The flow rate of the NSAM was 2.5 L·min−1, and the time resolution was set to 10 min. The NSAM has a cyclone with a 50% cut-off of 1 μm at the inlet. The NSAM can measure reliable LDSA of the particles between the ranges of 20 and 400 nm [26]. The procedure for the conversion from LDSA (the actual NSAM reading) to aerosol surface area has already been described elsewhere [18], but is briefly summarized here. The calibration constant is determined with passing monodisperse aerosols simultaneously through the scanning mobility particle sizer (SMPS) and the NSAM by the manufacturer (TSI Inc.). Specifically, the total surface area of the 80-nm NaCl particles determined by the SMPS is multiplied by the lung deposition efficiency of 80-nm particles, which is determined using the lung deposition curve for a reference worker reported by the International Commission on Radiological Protection [34]. In this study, we measured tracheobronchial-deposited surface area values using the NSAM, and then converted them into aerosol surface area by dividing them by the ICRP deposition efficiency of 80-nm particles. In order to check the validity of the calibration constant, we measured the total surface area of polydisperse SiO2 particles (sicastar, micromod Partikeltechnologie GmbH, Rostock, Germany) using SMPS and NSAM simultaneously. The geometric surface area concentrations were calculated using particle diameters of the spherical particle. The experiments were conducted for several levels of the particle concentrations by changing the mixing volume of dilution air. The results are shown in Figure 2. The surface area measured by NSAM matched very well with that measured by SMPS. Therefore, we applied this calibration constant to the field measurement results obtained in this study.

The mass concentration of BC in PM2.5 was automatically and continuously measured using an aethalometer (AE-16U, Magee Scientific Corp., Berkeley, CA, USA) [33]. A Sharp-Cut Cyclone SCC1.829 (BGI Inc., Butler, NJ, USA) was used as the PM2.5 inlet. The BC concentration measured using an aethalometer based on the rate of absorption of incident light (880 nm) by BC shows reasonable agreement with elemental carbon (EC) measured using the thermal-optical method [35,36]. The flow rate of the aethalometer was 5.0 L·min−1, and the time resolution was set to 15 min.
Sulfate concentrations were automatically measured and analyzed using a continuous dichotomous aerosol chemical speciation analyzer (ACSA-12, Kimoto Electric Co., Ltd., Osaka, Japan). The ACSA-12 determines the sulfate ion concentration using the BaSO4-based turbidimetric method after the addition of BaCl2 dissolved in polyvinyl pyrrolidone solution, and the results correspond closely with the values determined using the denuder-filter/ion chromatography method [37]. According to the previous study, sulfate concentration values measured by ACSA were approximately 10% higher than those measured by the denuder-filter/ion chromatography [37]; this might be caused by the effect of organosulfates.
The aerosol number concentrations and particle size distributions (optical equivalent diameter: >0.3, >0.5, >1.0, >2.0, >3.0, and >5.0 μm) were measured using an optical particle counter (OPC, TD100; Sigma Tech., Yokohama, Japan), which was installed on the rooftop of the building in Fukuoka University, and operated in ambient conditions without using a heating drier. The size discriminator of the OPC was calibrated using polystyrene latex spheres with a refractive index of 1.59-0i. The OPC data were corrected for coincidence loss. The flow rate of the OPC was 1.0 L·min−1, and the time resolution was set to 1 min.
PM2.5 mass concentration, wind direction, and wind speed data were obtained from websites operated by national and local governmental offices [38,39].
The time resolution varied according to the instrument or the sources of the downloaded data. As a result, we used 1-h average values for all further analyses in this study. All times are expressed according to the local time zone (JST:UTC + 9 h).

3.2. Monthly Correlations between Aerosol Surface Area and BC Concentrations

3.3. Effect of Land and Sea Breeze on the Correlation between Aerosol Surface Area and Black Carbon Concentrations

As we have seen, the correlation between the aerosol surface area and BC concentrations varied from month to month as a result of sulfate input or coating of BC surfaces. In this section, we discuss how this correlation changed with time of day. We divided the day into four segments: (a) night (0:00–6:00), (b) morning (6:00–12:00), (c) afternoon (12:00–18:00), and (d) evening (18:00–24:00). Table 3 shows the correlation between the aerosol surface area and BC concentrations in the four time segments. The coefficients of determination for the afternoon (R2 = 0.07–0.71) in particular were lower than that for the other times (night: 0.41–0.87, morning: 0.09–0.84, and evening: 0.29–0.81). This diurnal variation can be related to wind direction and speed. Fukuoka lies on the coast of the Sea of Japan, and is thus often subject to the land and sea breeze. Figure 9 shows a diurnal variation in wind speed and wind direction in Fukuoka from April 2015 to March 2016. In Fukuoka, the direction of sea breezes is northerly (0°) and that of land breezes is southerly (180°). We generally recorded a sea breeze during the afternoon (12:00 to 18:00), which was strongest from 13:00 to 16:00 (~4 m·s−1), and a gentler land breeze (~2 m·s−1) at night and the early morning. This may have caused that BC concentrations to decrease in the afternoon due to the inflow of a clean airmass via the sea breeze. The nocturnal reversal of the wind direction back to the land breeze would then prevent any further decrease in BC concentrations. Figure 10 shows the BC concentrations corresponding to the wind direction and wind speed. These plots clearly show that stronger northerly winds make the BC concentration low. In addition, sulfate concentrations were higher in the afternoon (12:00–18:00) than at other times (t-test, p < 0.01; Figure 3b). Generally, sulfate is formed by the oxidation of SO2, and this reaction is promoted by solar radiation (i.e., during the daytime). The additional sulfate particles formed would thus contribute to the aerosol surface area concentration. This explains the lower coefficients of determination between the aerosol surface area and BC concentrations in the afternoon and the reversal of this pattern in the evening (Table 3).

T.O. conceived and designed the experiments, and wrote the paper; M.K. analyzed the data and wrote the draft of the paper, H.Y. analyzed the data; K.H. (Keio University), K.F., and K.I. installed and operated the NSAM, N.K. performed the BC measurements; I.U. and S.Y. installed and operated the ACSA; A.Y., A.T., C.N., K.H. (Fukuoka University), and M.H. administrated the entire experiments. All authors contributed to revising the manuscript. 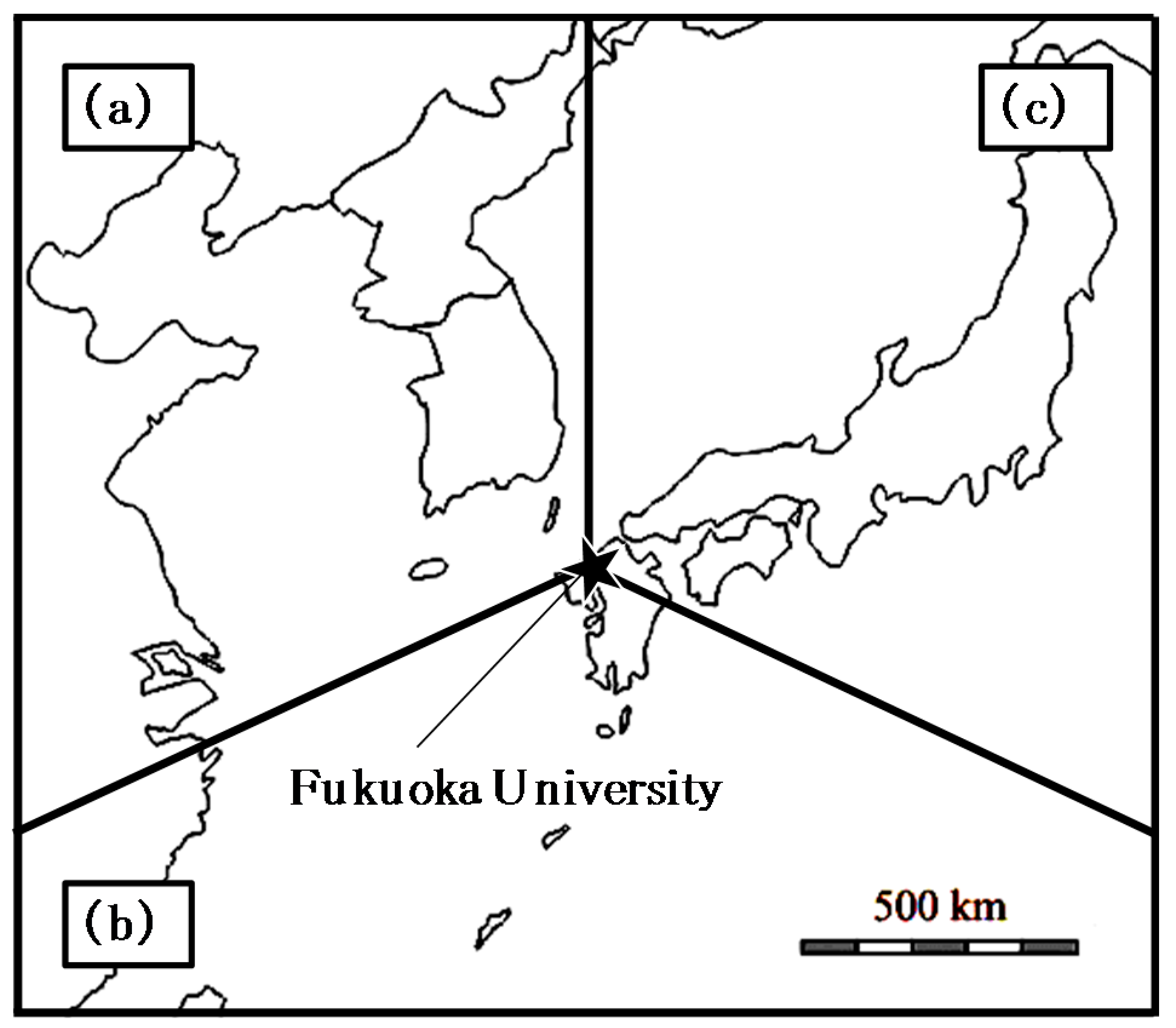 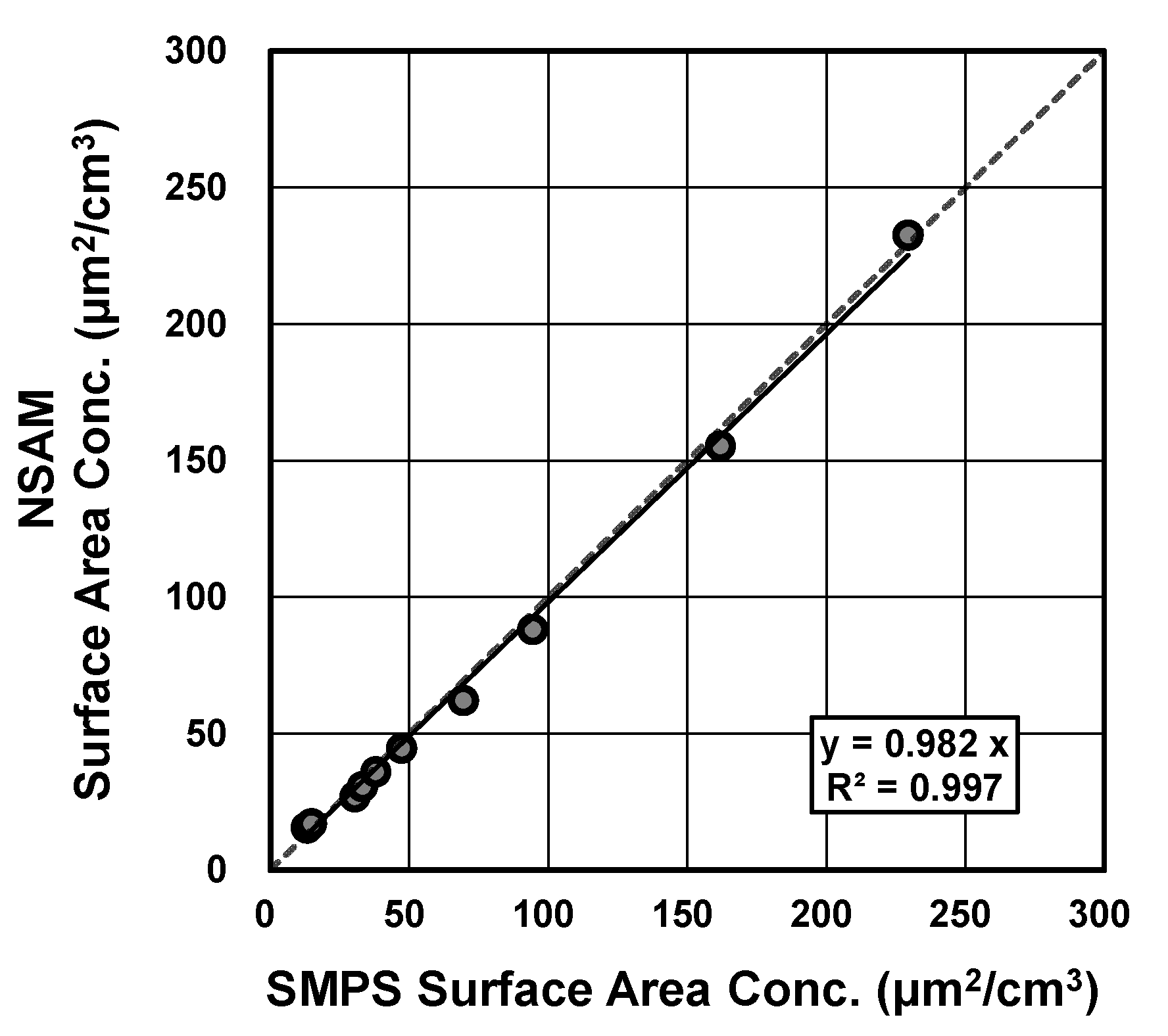 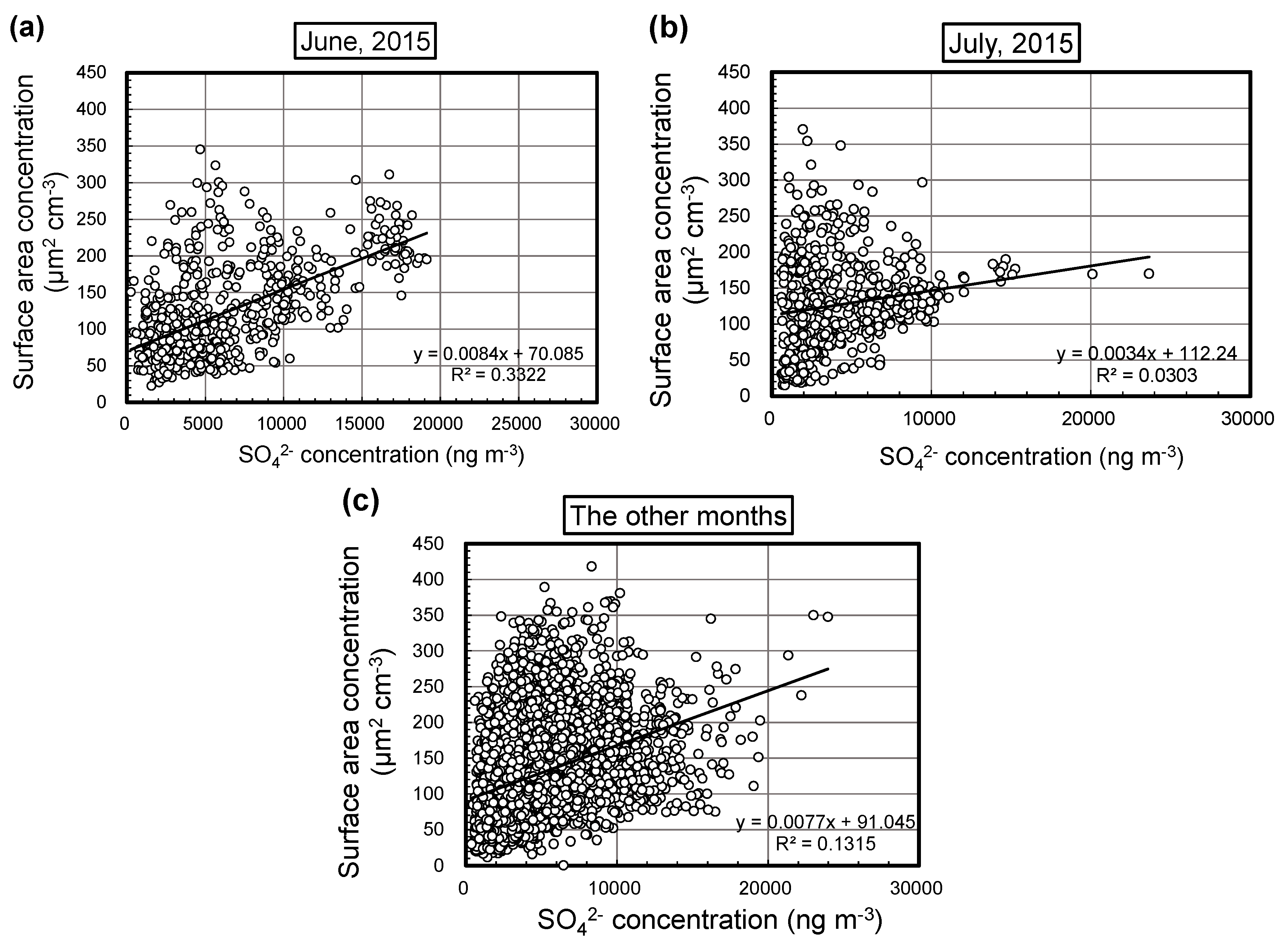