Radar systems provide the most useful information about the intensity, movement, and characteristics of severe thunderstorms, but are expensive to maintain and require extensive maintenance. In South Africa, some areas are not covered by radar systems, while very few operational radar systems exist in other southern African countries. Despite these shortcomings, all meteorological centers still have to warn the public of pending severe weather events. The Nowcasting Satellite Application Facility (NWC SAF) in Europe developed software that utilizes satellite data to identify and track rapidly developing thunderstorms (RDT). The NWC software was installed at the South African Weather Service in 2014. Initially, the RDT product was validated against lightning data and the results showed that the RDT product could provide very useful information on possible severe or intense convective storms. This study focusses on the effects of including lightning as an ancillary dataset into the algorithms and then validating the RDT product against radar data. Twenty-five summer cases were considered to determine whether the inclusion of lightning data had a positive effect on the accuracy of the RDT product, when compared to radar data. The results of this study show that in the majority of the cases, the inclusion of lightning data was beneficial to the RDT product. On average the Probability of Detection (POD) improved by 6.6%, the Heidke Skill Score (HSS) by 4.6%, and the False alarm ratio (FAR) by 0.1%. To our knowledge, South Africa is the only African country which is running the NWC SAF software operationally and which has performed an evaluation of the product over Africa against observations from radar systems and lightning sensors. The outcomes of this study are very encouraging for other countries in Africa where convection and severe convection often occur and sophisticated data sources are absent. Initial studies over East Africa indicate that the RDT product can benefit operational practices for the nowcasting of severe convection events.
Keywords: satellite; nowcasting; thunderstorms; data sparse regions; radar; lightning satellite; nowcasting; thunderstorms; data sparse regions; radar; lightning

Twenty-five cases were considered during the southern hemisphere spring and summer seasons. A few individual cases will be discussed first and then the statistical scores for all the cases will be shown.

In Figure 3, the RDT without (a) and RDT with (b) lightning data added to the input data for 1700 UTC on 20 October 2012 are compared with the radar reflectivity image (c) for the same time. The RDT polygons outlined in red depicts all the storms in the growing phase, the purple polygons the storms in the mature phase, and the blue polygons the storms that are decaying. The black arrows associated with the RDT polygons point in the direction the storms are moving and the length of the arrows is related to the speed of the storms. The two RDT images are similar, except that a few additional storms were identified when lightning data were included. The green and yellow arrows show that these storms had higher reflectivities on the radar image. A mature storm was identified by RDT when lightning data was included in the software (indicated by blue arrow on Figure 3b) but was not identified by radar. In this case, the storm indicated by the blue arrow was next to another mature storm and the lightning associated with this storm also satisfied the criteria for the storm indicated by the blue arrow. As a result, the software forced the storm to be identified as a mature storm while in fact the radar did not identify any reflectivities above 35 dBZ. This is an example of a case where the RDT product might produce false alarms when identifying storms. Figure 3 also shows how the RDT product identifies the areas on the satellite image where significant storms are occurring by pointing out the areas of interest among all the non-convective clouds. The average of all the time steps for this day indicate that there was a 7% improvement in the POD (from 0.43 to 0.5), a 2% improvement in the FAR (from 0.19 to 0.17), and a 7% improvement in the HSS from 0.53 to 0.6 when lightning data is included in the RDT software.

Figure 4 shows the RDT without lightning (a), RDT with lightning included (b), and radar reflectivity (c) for 1300 UTC on 21 March 2015. Additional storms were again identified when lightning data were included in the input, and some of the phases of the storms changed. An intense storm (>50 dBZ) over the central parts of the country, as indicated by the yellow arrow, was identified when lightning data was included. The average of all time steps for this day shows that the POD score improved by 5% (from 0.76 to 0.81), the FAR increased slightly (from 0.062 to 0.067), and the HSS improved by 2% (from 0.83 to 0.85) when lightning data was added to the software.

Figure 6 illustrates the HSS for all 25 cases for which the RDT was evaluated against radar. The dark green solid line shows the HSS when lightning was excluded from the software and the dotted light green line when lightning data was added as auxiliary input. The average HSS per day for all 25 days if lightning data were not included was 0.616, while the HSS was 0.662 when lightning data were included, thus the HSS improved by 4.6%. For 21 of the 25 cases the RDT validation showed improvement when lightning data were included, in three cases the validations were slightly worse and one case showed no change in the HSS. On day 24 (29 March 2015) and 25 (30 March 2015) (not shown), most thunderstorm activity occurred over the parts of South Africa which are not covered by radar and thus did not form part of the evaluation domain. Where radar coverage was available, very few thunderstorms occurred and the few RDT polygons were mostly associated with radar reflectivities less than 35 dBZ. This is also the end of the convective season in South Africa, and although convection still occurs, it is less intense compared to earlier in the season. As a result, the HSS scores were low. The inclusion of lightning data into the RDT did, however, improve the HSS for these two days by reclassifying the isolated storms identified by RDT (without the inclusion of lightning) that were associated with low reflectivities and lightning as non-convective storms. Cases 10–25 (used in this study) covered the period from 15 to 30 March 2015. These cases were selected to obtain some sort of running period in order to measure the performance of RDT on a daily basis, and not necessarily on days where significant thunderstorms occurred.
In Figure 6 the POD (bars) and FAR (lines) for the RDT product with (POD—light blue and FAR—light red) and without (POD—dark blue and FAR—dark red) lightning data included as auxiliary data are compared for the 25 cases. On average, for the 25 cases, the POD was 6.6% better when lightning data were included and the FAR was slightly higher (0.1%). In 23 of the 25 cases, the POD improved, in case 18 the POD was marginally lower, and in case 22 the POD remained the same with and without lightning as input to the software. The FAR remained similar, showing a slight improvement in 13 of the cases and a small increase in 12 of the cases.
It is also important to know if the RDT product performs better during certain times of the day. In Figure 7 the HSS, POD, and FAR for all 25 cases are compared for the different times of the day. The HSS (green lines) and POD (blue bars) show improvement to the RDT product for all time steps when lightning data were included in the input, except for the HSS at 1800. The FAR (red lines) is similar with/without lightning data included. From this graph, it is clear that the RDT validates well against radar for all relevant hours between 1100 and 1800 UTC, and shows an improvement when lightning data is added to the input dataset.
Table 3 gives an overview of the average evaluation statistics calculated for all of the 25 cases and for all of the time steps between 1100 and 1800 UTC with and without lightning data added to the RDT software. These statistics show that the POD improved by 6.6%, the FAR by 0.1%, and the HSS by 4.6% with the addition of lightning data. The POFD remained similar, being 0.06% worse than before.

The 3 March 2015 case forms part of a World Meteorological Organization (WMO) initiative of an eastern Africa Severe Weather Forecast Demonstration Project (SWFDP) that aims to provide severe weather forecasting and warning services over eastern Africa, which includes Lake Victoria [26]. Figure 8 shows the RDT product over the Lake Victoria area of southern Africa for 3 March 2015 at 1715 UTC (a) and 2000 UTC (b). Only satellite and NWP data were used as input in the software. On this day, a severe weather event that produced hail, heavy rainfall, and strong winds occurred south of the lake at Kahama in Tanzania [27]. The storm resulted in the deaths of 47 people, 5000 people were affected, and 634 houses were damaged [28]. The yellow arrows on Figure 8 indicate that at 1715 UTC the RDT already identified the development of rapidly developing storms south of the lake and by 2000 UTC a large mature storm was identified which was associated with hail, strong winds, and heavy rainfall. This example highlights the importance of such a product over data sparse regions for the nowcasting of thunderstorms where little observational networks exist. Currently there is no observational data available over this region to validate the products and one has to rely on reports of severe weather in order to demonstrate the usefulness of products such as the RDT over these regions.

Radar systems are the ideal tools for the identification and tracking of convective storms. In many countries, however, these powerful tools are not available. The NWC SAF developed various satellite based tools which can address some of the nowcasting needs, of which the RDT is used for thunderstorm identification and tracking. The aim of this work was to test the effect of including lightning data as auxiliary dataset into the RDT product and to verify this against radar reflectivity of convective storms over South Africa. The results of twenty-five case studies over the South African domain showed that the inclusion of lightning data had a positive effect on the RDT product. However, even without the inclusion on lightning data the RDT product shows promise to provide information on possible severe or intense convective storms in regions that are not covered by radar systems. To our knowledge, South Africa is the only African country which is running the NWC SAF software operationally and which has performed an evaluation of the product over Africa against observations from radar systems and lightning sensors. The product is currently operationally available to all NMHS centers that form part of the southern African SWFDP (Botswana, Democratic Republic of the Congo, Lesotho, Madagascar, Malawi, Mauritius, Mozambique, Namibia, Seychelles, South Africa, Swaziland, Tanzania, Zambia, and Zimbabwe) and is a valuable tool for these data sparse countries that will assist with the nowcasting of thunderstorms. This product could also benefit the aviation industry for planning at the terminal as well the en-route environment.

The authors would like to thank the Water Research Commission (WRC) for funding this research. This work forms part of the WRC project entitled: Optimising the use of updated and additional products from the Nowcasting Satellite Application Facility. 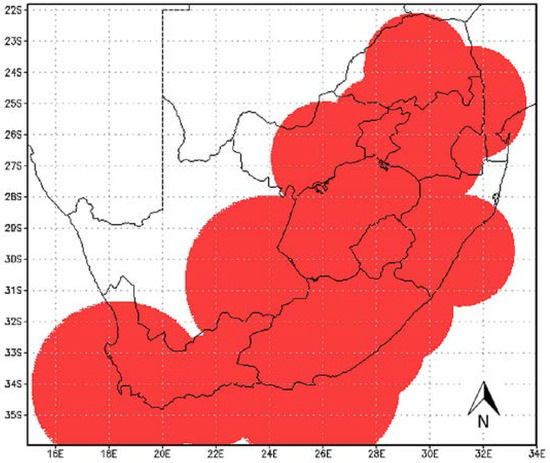 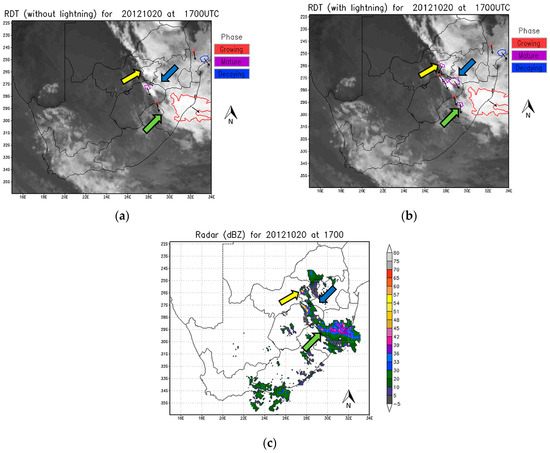 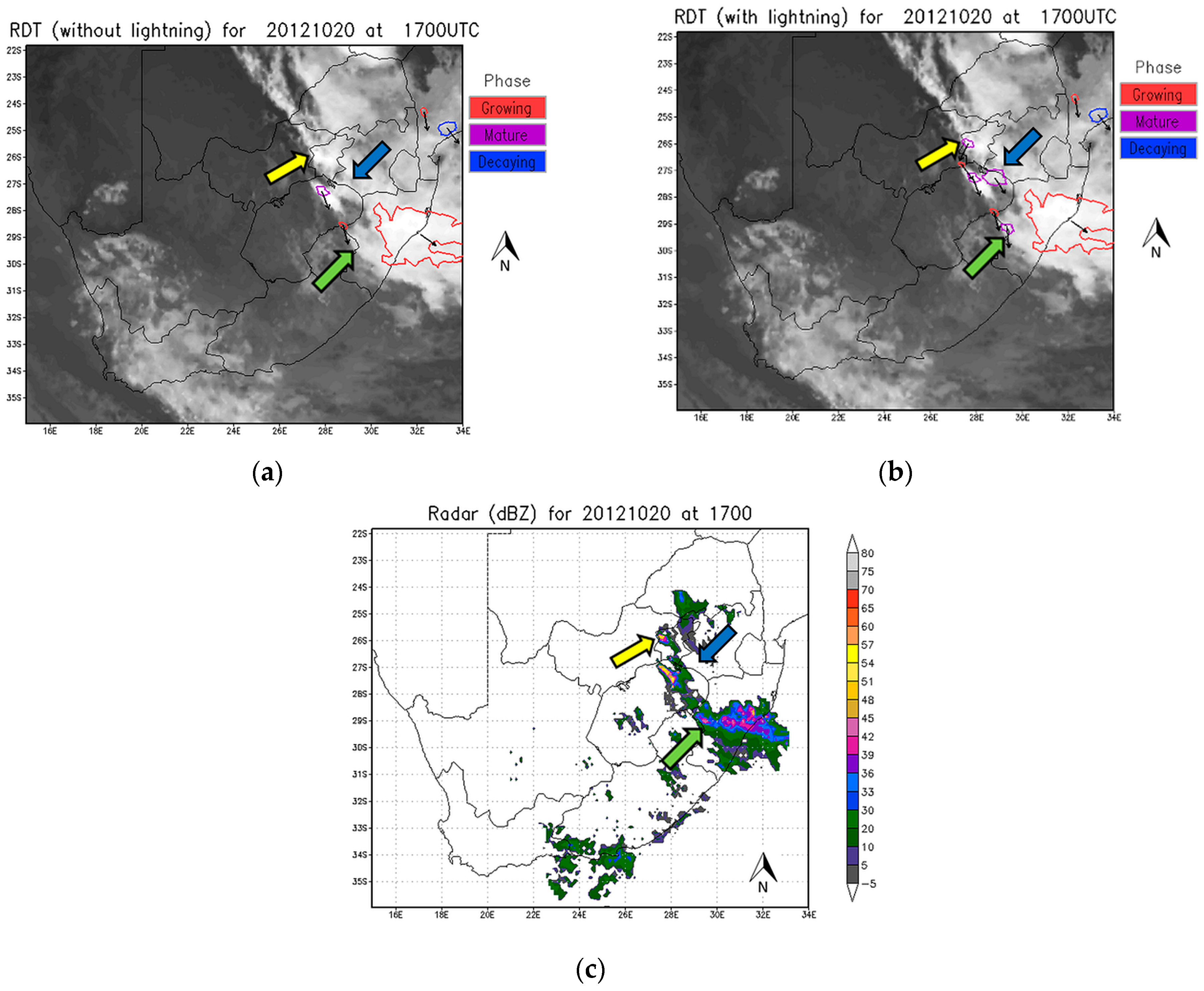 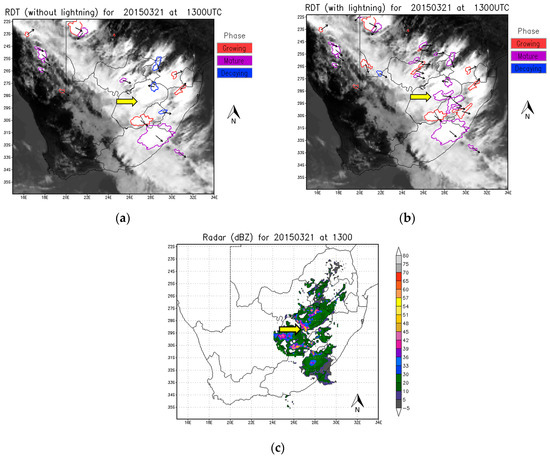 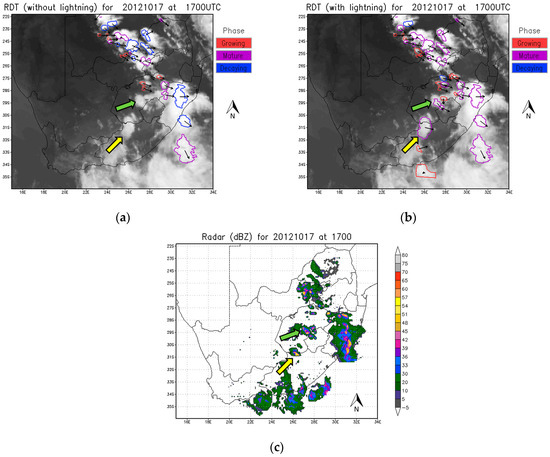 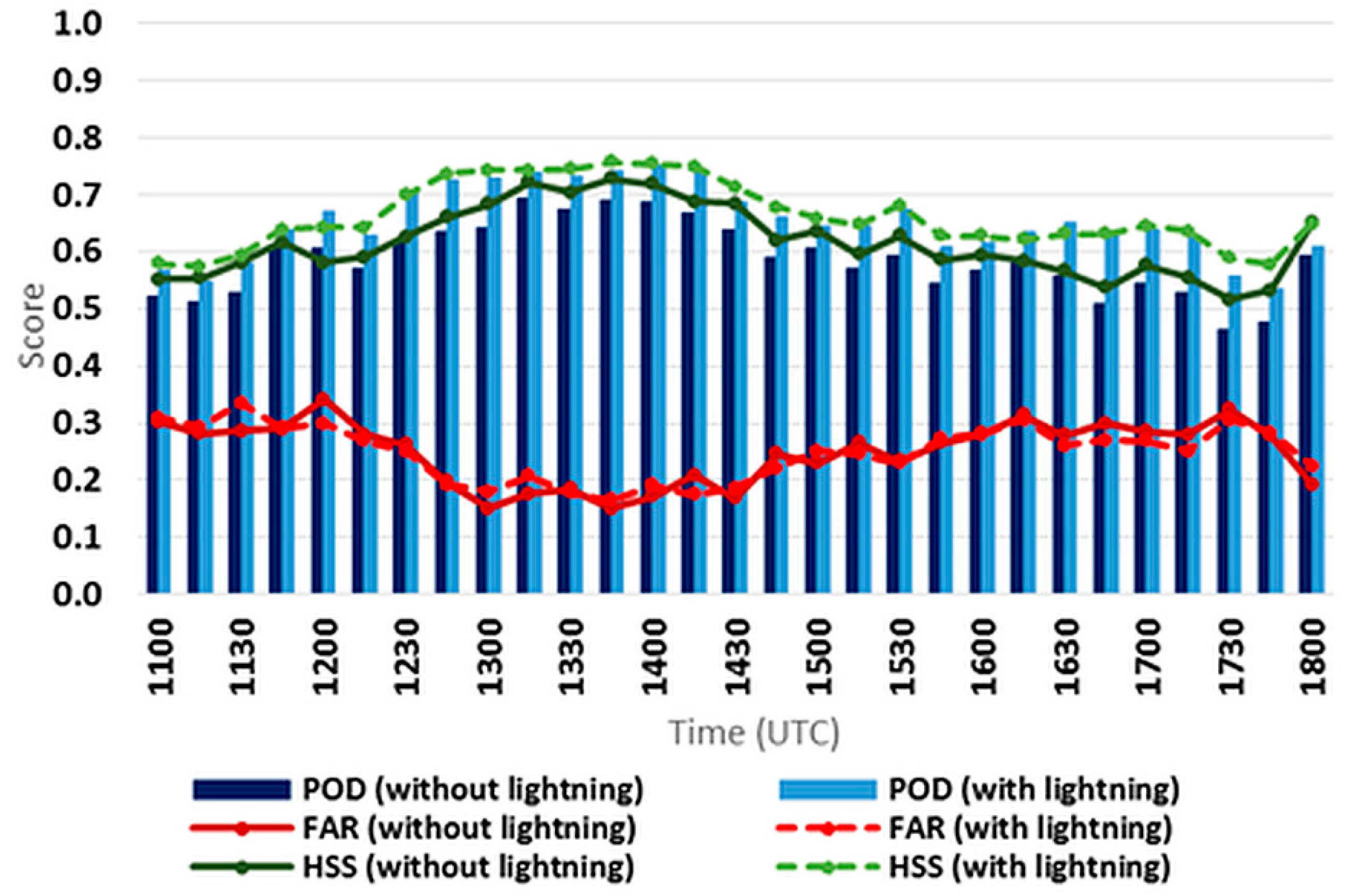