A Comparative Study of B-, Γ- and Log-Normal Distributions in a Three-Moment Parameterization for Drop Sedimentation
Previous Article in Journal

Characterization of PM10 and PM2.5 and Their Metals Content in Different Typologies of Sites in South-Eastern Italy
Previous Article in Special Issue

The aim of our study is to estimate the parameters M (water content), R (rain rate) and Z (radar reflectivity) with raindrop size distribution by using the neural network method. Our investigations have been conducted in five African localities: Abidjan (Côte d’Ivoire), Boyele (Congo-Brazzaville), Debuncha (Cameroon), Dakar (Senegal) and Niamey (Niger). For the first time, we have predicted the values of the various parameters in each locality after using neural models (LANN) which have been developed with locally obtained disdrometer data. We have shown that each LANN can be used under other latitudes to get satisfactory results. Secondly, we have also constructed a model, using as train-data, a combination of data issued from all five localities. With this last model called PANN, we could obtain satisfactory estimates forall localities. Lastly, we have distinguished between stratiform and convective rain while building the neural networks. In fact, using simulation data from stratiform rain situations, we have obtained smaller root mean square errors (RMSE) between neural values and disdrometer values than using data issued from convective situations. View Full-Text
Keywords: reflectivity; radar; water content; rain rate; artificial neural network reflectivity; radar; water content; rain rate; artificial neural network
►▼ Show Figures 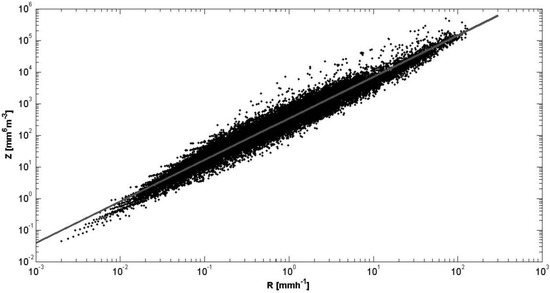