The Mediterranean region is characterized by its vulnerability to changes in the water cycle, with the impact of global warming on the water resources being one of the major concerns in social, economical and scientific ambits. Even if precipitation is the best-known term of the Mediterranean water budget, large uncertainties remain due to the lack of suitable offshore observational data. In this study, we use the data provided by the Advanced Microwave Sounding Unit-B (AMSU-B) on board NOAA satellites to detect and analyze precipitating and convective events over the last decade at spatial resolution of 0.2° latitude × 0.2° longitude. AMSU-B observation shows that rain occurrence is widespread over the Mediterranean in wintertime while reduced in the eastern part of the basin in summer. Both precipitation and convection occurrences display a weak diurnal cycle over sea. In addition, convection occurrences, which are essentially located over land during summertime, shift to mostly over the sea during autumn with maxima in the Ionian sub-basin and the Adriatic Sea. Precipitation occurrence is also inferred over the sea from two other widely used climatological datasets, HOAPS (Hamburg Ocean Atmosphere Parameters and Fluxes from Satellite Data) and the European Centre for Medium-Range Weather Forecasts (ECMWF) reanalysis interim (ERA-Interim). There is generally a rather fair agreement between these climatologies for describing the large-scale patterns such as the strong latitudinal gradient of rain and eastward rain signal propagation. Furthermore, the higher spatial resolution of AMSU-B measurements (16 km at nadir) gives access to mesoscale details in the region (e.g., coastal areas). AMSU-B measurements show less rain occurrences than HOAPS during wintertime, thereby suggesting that some of the thresholds used in our method might be too stringent during this season. We also observed that convection occurrences in ERA-Interim are systematically lower than those derived from AMSU-B. These results are potentially valuable to evaluate the rainfall parameterization in weather and climate models and to constrain ocean models. View Full-Text
Keywords: precipitation; convection; microwave remote sensing; climatology; Mediterranean precipitation; convection; microwave remote sensing; climatology; Mediterranean
►▼ Show Figures 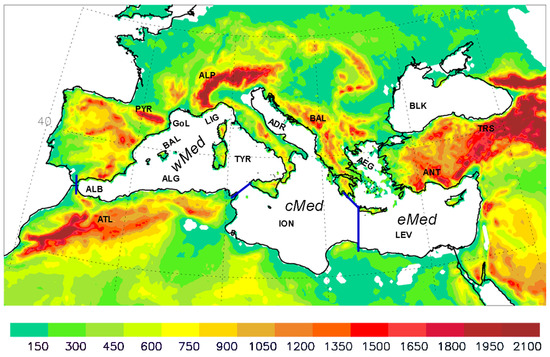