The Yangtze River Basin covers a total area of 1.8 million square kilometers (Figure 1), accounting for 18.8% of China’s territory, making it the largest basin in Asia. The Yangtze River Basin spans the Qinghai-Tibet alpine region, the southwest tropical monsoon region and the central China subtropical monsoon region [22]. The vegetation in the upper reaches is dominated by alpine meadow and natural grassland, the forest vegetation in the middle reaches is dominated, and farmland is widely distributed in the middle and lower reaches and Sichuan Basin [23]. With rich resources, large population clusters, and rapid industrial development [25], it plays an important role in ecological integrity and ecosystem services.

In this paper, 114 meteorological stations within the Yangtze River Basin were selected from 1980 to 2019, and data such as mean temperature and latitude were obtained from the China Meteorological Science Data Sharing Service (https://www.data.cma.cn/ accessed on 2 March 2020). In order to ensure the integrity of data in time series, the missing data of a few stations are interpolated by neighboring stations. The driving factor data (Table 1), provincial boundaries in the Yangtze River Basin and the boundary of the Yangtze River Basin were obtained from the Resource and Environmental Science and Data Center of Chinese Academy of Sciences (https://www.resdc.cn/ accessed on 26 March 2022) and Geospatial Data Cloud (https://www.gscloud.cn/ accessed on 20 March 2022).

Time series clustering groups regions with similar trends and patterns into a common cluster. These clusters are unlabeled and simply indicate the similarity of trends and patterns between different regions [32,33]. It is very difficult to analyze and mine the large amount of data and high-dimensional time series, which will affect the overall analysis results [34]. Due to the various applications of time series cluster analysis, there are many different TSC methods [35]. Based on the similarity of time series features, the time series set stored in the space-time cube is divided. It can aggregate time series based on three conditions: having similar time values, tending to increase and decrease at the same time and having similar repeating patterns [23] (Figure 3). In this paper, the SPEI data in the Yangtze River Basin from 1980 to 2019 was combined with the space-time cube model for time series clustering.

Emerging hot spot analysis can identify the spatio-temporal trend and patterns of change in data [36], and analyze the hot or cold spots of a certain feature at the spatio-temporal scale. The Getis-Ord statistic is calculated for each cube bar by specific neighborhood distance and prodomain time step parameters [37]. statistic is the z-score. The obtained z-score allows to know where the clustering of high- and low-valued elements occurs in space. Mann–Kendall trend test method is used to test the trend of hot spot analysis results [38]. The results are divided into seven categories: new hot spot, sporadic hot spot, oscillating hot spot, new cold spot, sporadic cold spot, oscillating cold spot and no pattern detected [26]. Finally, according to the spatial pattern characteristics of the time series of each research unit, statistical analysis and the results of the Mann-Kendall trend test, the research results are classified into different types of spatio-temporal patterns for comprehensive expression according to certain classification principles [39]. In recent years, emerging hot spot analysis has been applied to different scientific fields [40,41].
The formula for is as follows. where is the attribute value of element j, is the spatial weight between elements i and j, n is the total number of elements, and

Geodetector is a new statistical method for detecting spatial stratified heterogeneity and revealing the driving factors behind it [42]. The core idea is based on the assumption that if an independent variable has a significant effect on a dependent variable, then the spatial distribution of the independent and dependent variables should have similarity [43,44]. Geodetector is good at analyzing type quantities, while sequential, ratio or interval quantities can be analyzed with appropriate discretization [45]. Geodetector can also be used for statistical analysis [42]. The core of the theory is to detect the consistency of spatial distribution pattern between the dependent variable and the independent variable through spatial stratified heterogeneity, and to measure the explanatory power of the independent variable on the dependent variable accordingly. Geodetector includes 4 detectors: factor detector, ecological detector, interaction detector and risk detector. These detectors are mutually perfect and supportive relationships in measuring the explanatory power of the independent variables on the spatial distribution of the dependent variable [46].
(a) Factor detector
Detecting the spatial stratified heterogeneity of the dependent variable Y and detecting the extent to which a factor X explains the spatial stratified heterogeneity of Y (Figure 4). The influence of each detection factor on the drought in the Yangtze River Basin can be calculated through factor detector, namely q. A larger q value means that the influence of a detection factor X on the drought in the Yangtze River Basin is greater. The expression is: where h is the stratification of variable Y or factor X, . and N are the number of units in layer h and the whole area, respectively. and are the variances of the Y values for layer h and the whole region, respectively.
(b) Interaction detector
It is used to analyze the interaction between the factors [42], that is, to assess whether the factors and together increase or decrease the explanatory power of the dependent variable Y, or whether the effects of these factors on Y are independent of each other. The method of evaluation is to first calculate the q-values of the two factors and on Y: and , and calculate the value of q when they interact (Figure 5): . Compare , and .
Drought formation is the result of a combination of drivers [47]. Referring to existing studies [48,49,50,51], 4 major aspects were selected from natural factors (topographic and meteorological factors) and human factors (socio-economic factors and traffic factors), and a total of 12 detection factors X were selected (Table 2). Based on the study of drought differences in the Yangtze River Basin using the factor detector method, the strength of the two-factor effect on drought differences was studied using the interaction detector analysis.

As shown in Figure 6, from 1980 to 2019, the annual SPEI of the Yangtze River Basin showed a obvious form of positive and negative oscillations in the short term. The trend line shows that the overall rate of increase is 0.01/10a, indicating a wet trend in the climate of the Yangtze River Basin, which is consistent with the findings of Zhang et al. [52]. In the past 40 years, the drought periods in the Yangtze River Basin were mainly concentrated in 1986–1988 and 2006–2013, among which the drought intensity was higher in 1986, 1988 and 2006, and with SPEI values of −0.75, −0.73 and −0.62, respectively, indicating Mild drought. The wet periods were mainly concentrated in 1980–1983 and 1989–2005, among which 1983 and 1998 were relatively wet, with SPEI values reaching 0.59 and 0.68, respectively.
This paper counted the area of drought areas in each year, as shown in Figure 7. It can be found that the percentage of drought areas in 1986, 1988 and 2006 were 0.68, 0.70 and 0.67, respectively, which indicates that the majority of areas in that time node were in drought.
The seasons are defined according to the meteorological division method. The division rules of different seasons and months are in the order of March to May (spring), June to August (summer), September to November (autumn), and December to February of the next year (winter).
As show in Figure 8, the seasonal time scale results showed that the overall SPEI of each seasonal scale in the Yangtze River Basin from 1980–2019 showed significant positive and negative fluctuations compared to the annual scale. The following conclusions can be drawn from the trend line: in spring and summer, the SPEI values showed no significant increasing trend, with an increasing rate of 0.061/10a and 0.003/10a, respectively; in autumn and winter, the SPEI values showed no significant decreasing trend, with decreasing rates of 0.006/10a and 0.077/10a, respectively. Compared with other seasons, the frequency of winter drought in the Yangtze River Basin from 1980 to 2019 was higher, and the variation trend of summer SPEI was more similar to that of the annual scale.

3.3. Analysis of Drought Drivers in the Yangtze River Basin 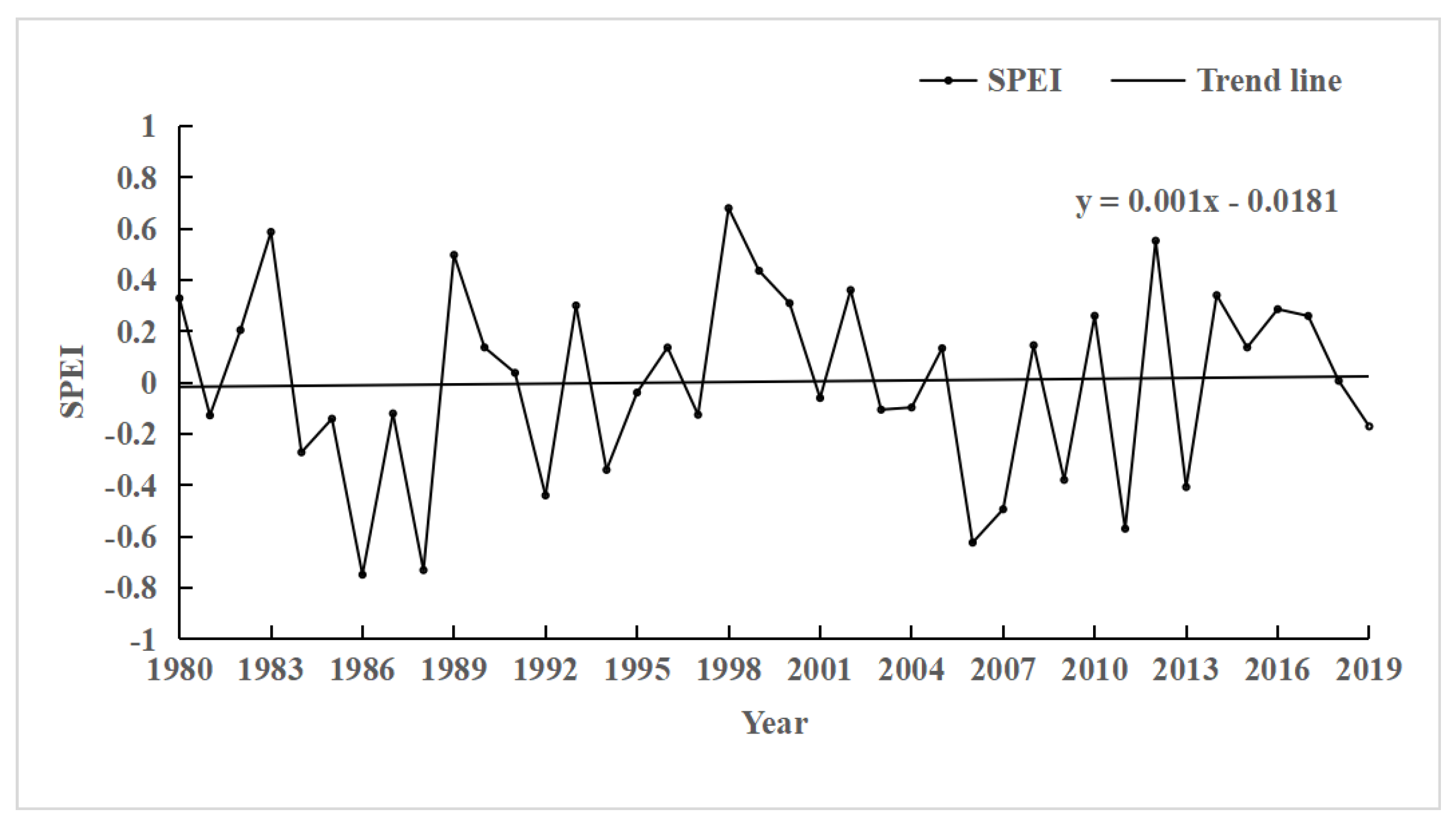 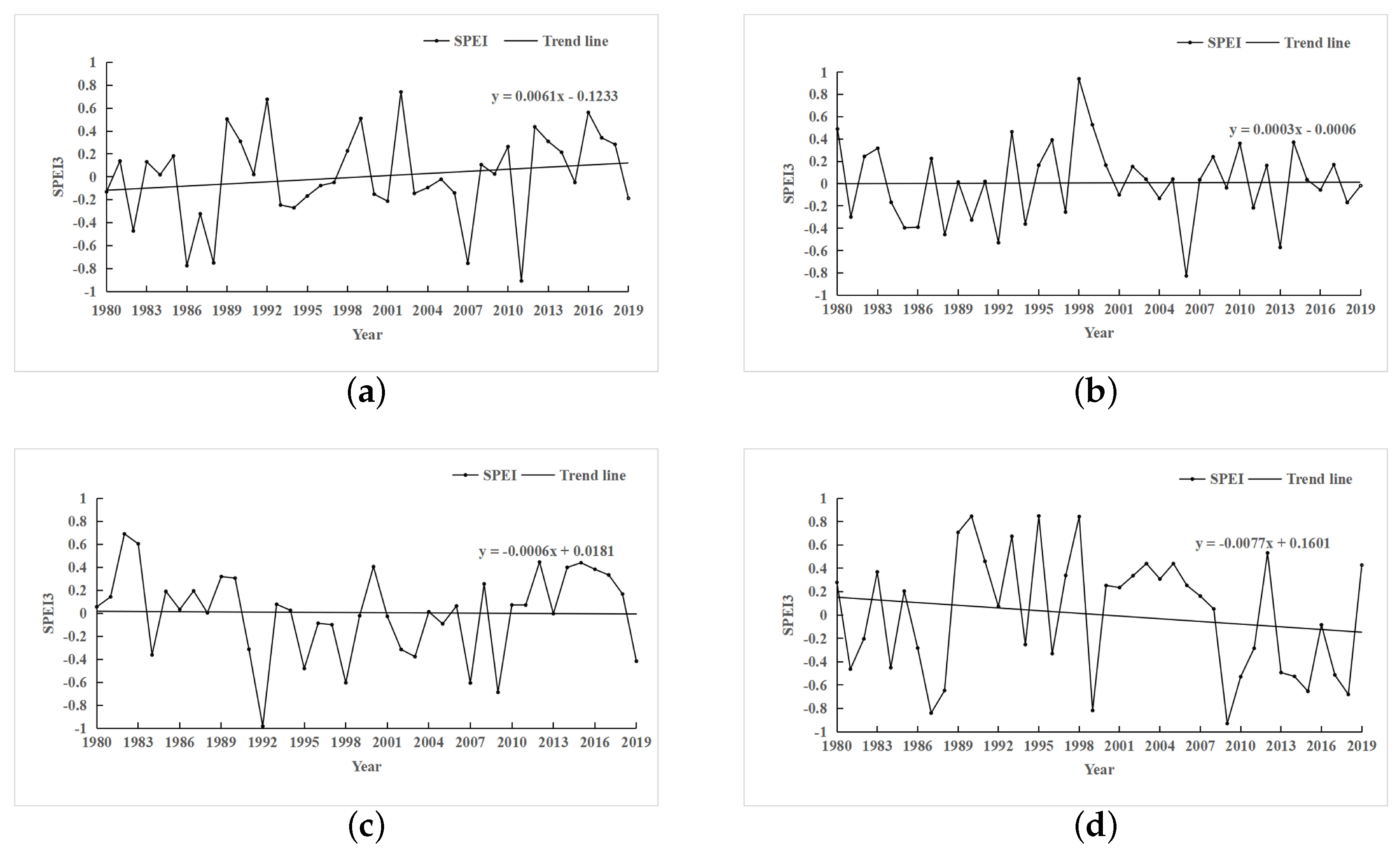 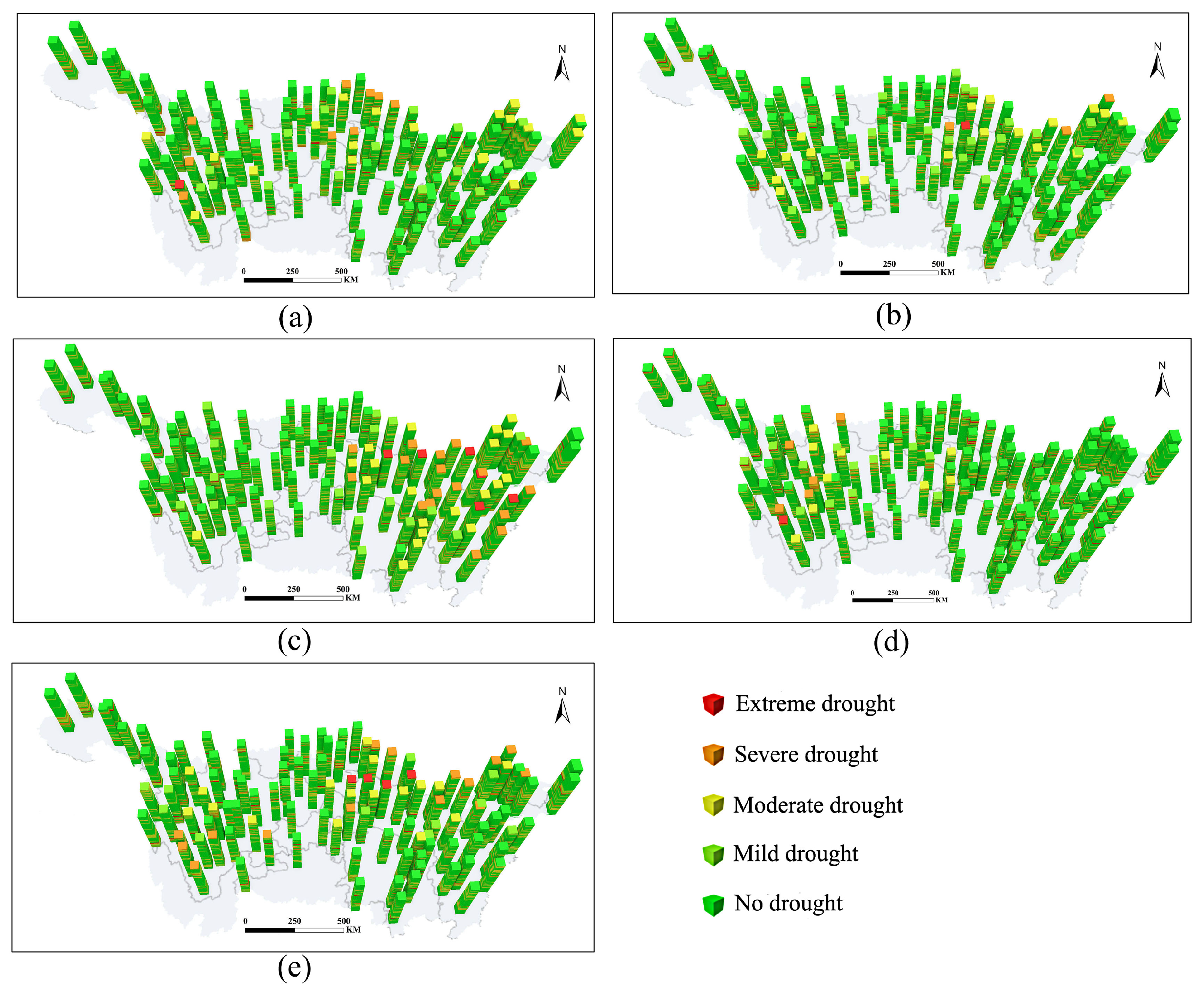 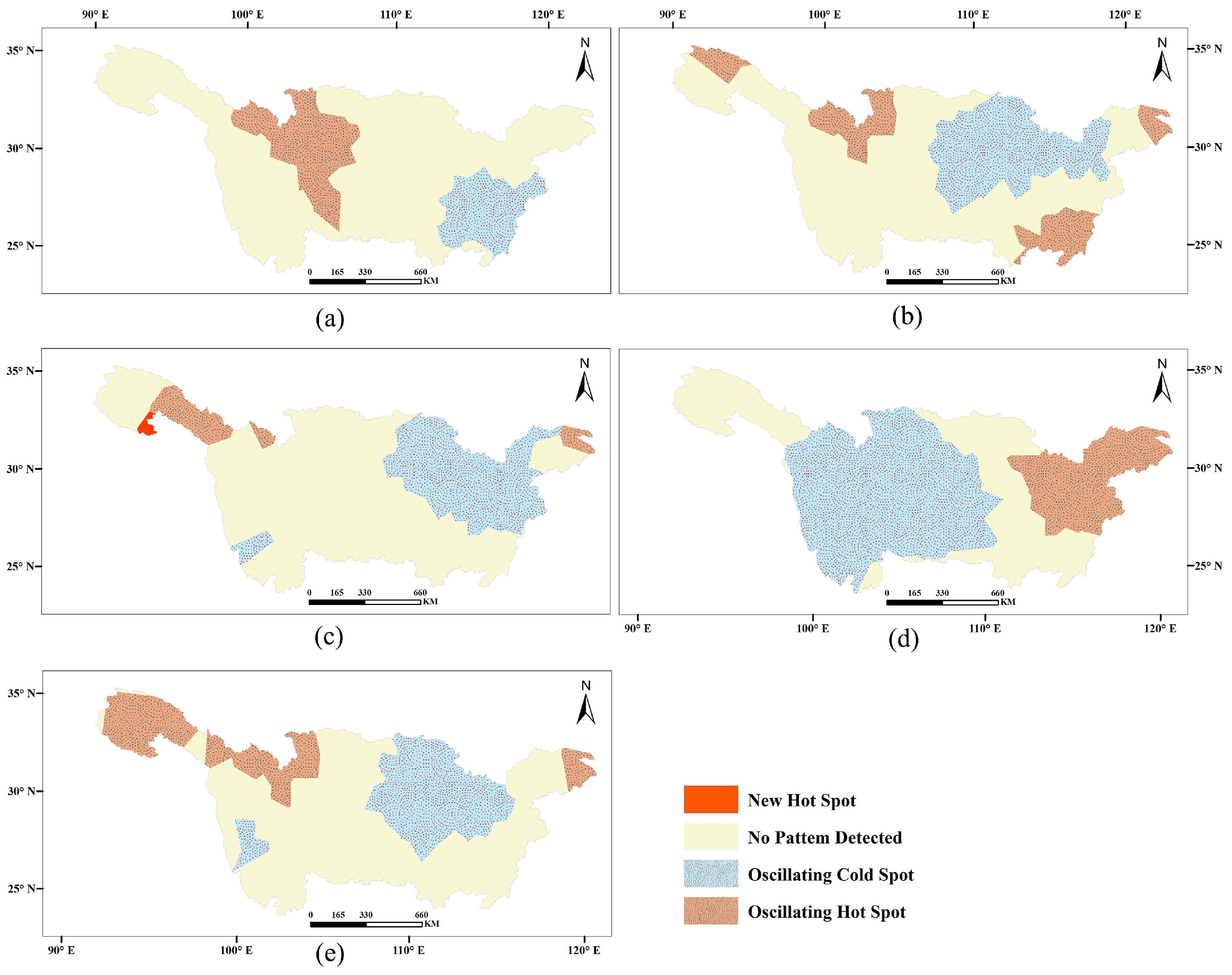 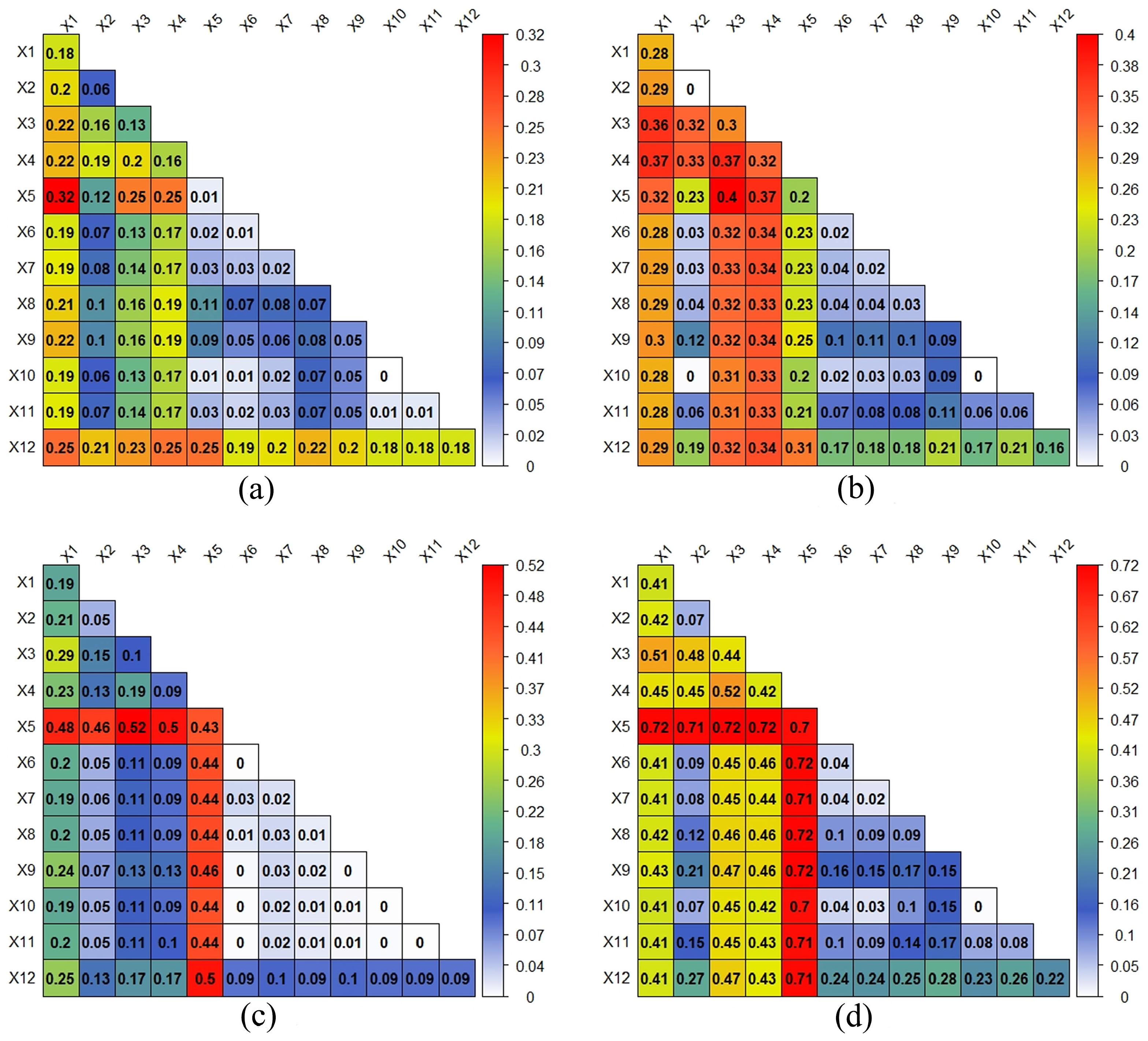