Which Meteorological and Climatological Information Is Requested for Better Surfing Experiences? A Survey-Based Analysis

The variability of stable oxygen isotope ratios (δ18O) from Greenland ice cores is commonly linked to changes in local climate and associated teleconnection patterns. In this respect, in this study we investigate ice core δ18O variability from a synoptic scale perspective to assess the potential of such records as proxies for extreme climate variability and associated weather patterns. We show that positive (negative) δ18O anomalies in three southern and central Greenland ice cores are associated with relatively high (low) Rossby Wave Breaking (RWB) activity in the North Atlantic region. Both cyclonic and anticyclonic RWB patterns associated with high δ18O show filaments of strong moisture transport from the Atlantic Ocean towards Greenland. During such events, warm and wet conditions are recorded over southern, western and central part of Greenland. In the same time the cyclonic and anticyclonic RWB patterns show enhanced southward advection of cold polar air masses on their eastern side, leading to extreme cold conditions over Europe. The association between high δ18O winters in Greenland ice cores and extremely cold winters over Europe is partly explained by the modulation of the RWB frequency by the tropical Atlantic sea surface temperature forcing, as shown in recent modeling studies. We argue that δ18O from Greenland ice cores can be used as a proxy for RWB activity in the Atlantic European region and associated extreme weather and climate anomalies. View Full-Text
Keywords: Greenland ice cores; atmospheric rivers; Rossby wave breaking Greenland ice cores; atmospheric rivers; Rossby wave breaking
►▼ Show Figures 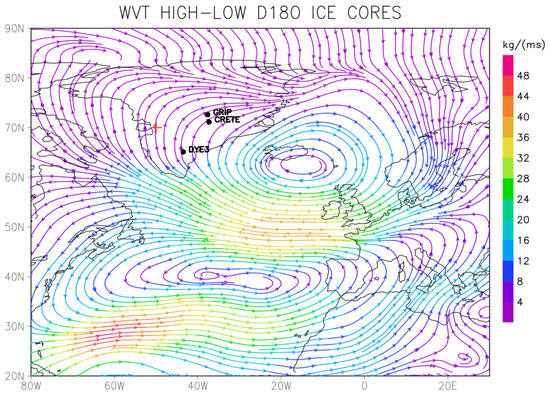