7Be, 210Pbatm and 137Cs in Snow Deposits in the Arctic Part of Western Siberia (Yamal-Nenets Autonomous District)
Previous Article in Journal

Mesoscale Model Simulation of a Severe Summer Thunderstorm in The Netherlands: Performance and Uncertainty Assessment for Parameterised and Resolved Convection
Previous Article in Special Issue

Anthropogenic Photolabile Chlorine in the Cold-Climate City of Montreal

Chlorine atoms play a key role in the oxidative potential of the atmosphere and biogeochemical cycling of selected elements. This study provides a decadal analysis (2010−2019) of chloride ions in PM2.5 particles in the city of Montreal, where these are most concentrated systematically in the winter (up to 1.6 µg/m3). We also herein present the measurement of photolabile chlorine, which includes chlorine-containing compounds (e.g., Cl2, HOCl, ClNO2, ClNO3, and BrCl) that release chlorine atoms upon interaction with radiation, in urban Montreal, Canada using Cl2-RPGE (Cl2 Reactive Phase Gas Extraction) tubes and quantifying the chlorinated product by GC-MS. Photolabile chlorine in urban Montreal was measured during a discontinuous period primarily in summer 2018 and winter 2019 with a time resolution of 30 min, with concentrations ranging from 3 to 545 ng/m3 expressed as Cl2. The reported values are considered lower limits, as compounds such as HOCl and ClNO2 can only be partially converted in the current setup. The largest peak of gaseous photolabile chlorine occurred in the winter, when significant sources of anthropogenic salt are used in snow removal in the city. This coincides with observed chloride ion measurements in airborne particles, implying that anthropogenic salt addition produces photoactive chlorine. The maximum chlorine signal was consistently obtained during the daytime, which is in accordance with the tropospheric radiation profile. Complementary photochemistry laboratory experiments indicated that upon tropospheric radiation (340 ≤ λ ≤ 400 nm; UVA), an increase (20–100%) was observed, confirming the formation of Cl atoms from photolabile chlorine compounds. Thus, this portable technique is adequate for Cl atoms and photolabile chlorine-containing compounds upon photolysis using UVA lamps. High-resolution S/TEM and energy-dispersive X-ray spectroscopy (EDS) were used to evaluate collected particle morphology and composition. The behavior of complementary pollutants (O3, CO, PM2.5, and NOx) was also briefly discussed. We herein discuss the measurement of photolabile halogens within a northern urban metropolitan environment and the impact of anthropogenic sources on chlorine concentrations. View Full-Text
Keywords: atmospheric photolabile chlorine; urban troposphere; anthropogenic chlorine; portable miniaturized trapping technique; gas chromatography mass spectrometry atmospheric photolabile chlorine; urban troposphere; anthropogenic chlorine; portable miniaturized trapping technique; gas chromatography mass spectrometry
►▼ Show Figures 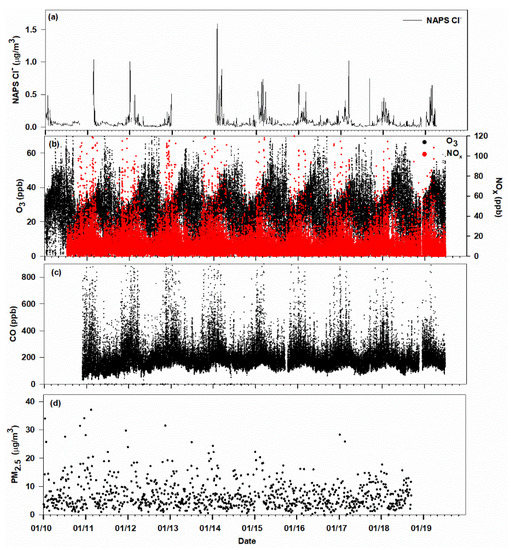