Climate Scenarios and Agricultural Indices: A Case Study for Switzerland
Next Article in Special Issue

Air Pollution Sources’ Contribution to PM2.5 Concentration in the Northeastern Part of the Czech Republic

The National Atmospheric Observatory Košetice operated by the Czech Hydrometeorological Institute was established in 1988 as a station specializing in air quality monitoring at the background scale. The observatory is located in the free area outside of the settlement and represents the Czech Republic in various international projects. The objective of the present study is to detect the long-term trends of air quality at the background scale of the Czech Republic. The statistical method used for trend analysis is based on the nonparametric Mann–Kendall test. Generally, the results show that the fundamental drop in emission of basic air pollutants was reflected in the significant decrease in pollution levels. A most significant drop was detected for sulphur. No trend was found for NO2 in 1990–2012, but a visibly decreasing tendency was registered in the last 7 years. A slightly decreasing trend was registered for O3 in the whole period, but a slightly increasing tendency was found after 2006. More importantly, the number of episodes exceeding the target value for human health dropped significantly. The reduction of volatile organic compounds (VOCs) emissions was reflected in a statistically significant decrease of concentrations. Only isoprene, which is of natural origin, displays an inverse trend. Concentrations of elemental carbon (EC) and organic carbon (OC) dropped since 2010, but only for EC is the trend statistically significant.
Keywords: long-term trends; background scale; air quality; Czech Republic long-term trends; background scale; air quality; Czech Republic

The danger caused by large-scale, global and regional pollution started to be recognised in the 1960s. Such pollution might end up resulting in irreversible changes in both terrestrial and ocean ecosystems and global climate change. The research and monitoring efforts required to detect the changes in the atmosphere at global and regional scales must be based on broad-ranging international cooperation. It was, first of all, international institutions (World Meteorological Organization, United Nations Economic Commission for Europe ECE, United Nations Environment Programme) that initiated, in the 1960s and 1970s, the first international monitoring programmes [1].
To support the above-mentioned programmes, Czech Hydrometeorological Institute (CHMI) established the National Atmospheric Observatory Košetice (NAOK), specialized in monitoring and research of air quality at the background scale of Czech Republic.
After the political changes in 1989, the air quality control and protection became one of the most important political priorities in the Czech Republic. Immense funds were invested in emission reductions (mainly from large power plants) in the Czech Republic during the 1990s, resulting in a marked improvement in the air quality, the levels of which in some regions had previously ranked among the worst in the world. Nevertheless, the growing industry and traffic after 2000 have caused the air quality in the Czech Republic to begin to deteriorate again. Irresponsible conduct of individuals who use low-quality fuels or even municipal waste in household heating systems, emitting hazardous chemicals to the air, is a contributing factor that cannot be neglected. Fine dust is the most serious problem at the moment. The Ministry of the Environment developed a National Emission Reduction Programme of the Czech Republic in 2007, and it has been approved by the government. The document comprises several key measures to contribute to an improvement in the current state of the environment and environmental and health protection.
The objective of the study is to detect the long-term trends of air quality at the background scale of the Czech Republic. Thirty-year data series is sufficient for detection of long-term trends of air quality. The study is based on the data generated within the National Air Pollution Monitoring Network, stored in Air Quality Information System and annually published e.g., [2]. Generally, the development of air quality in the last three decades was affected by various circumstances: the essential political changes in Central and Eastern Europe in the end of the 1980s brought a substantial decrease in emissions in the Czech Republic and more widely in the Central European region thanks to international conventions and also economic and political development. The meteorological conditions for long-range transport in Europe were changed as well, and the question of global climate change assumed importance. Measurement techniques showed significant improvement, as did our knowledge concerning the behaviour of air pollutants in the atmosphere. All these aspects influenced the long-term trends at the background scale of the Czech Republic very significantly.

NAOK is located in the agricultural countryside outside of settlements in the southern part of the Czech Republic, district of Pelhřimov (49°35′ N, 15°05′, 534 E m asl, Figure 1). More detailed description of physical-geographical conditions is available in [3]. The operation of NAOK started in 1988, but some basic air quality measurements were implemented since the middle of the 1980s in the vicinity of the observatory. The main task of NAOK throughout its history was to detect the long-term trends of air quality at the background scale of the Czech Republic and Central Europe and to represent the Czech Republic in the long-term programmes of air quality monitoring and research GAW/WMO (Global Atmosphere Watch), EMEP (Co-operative Programme for Monitoring and Evaluation of Long-range Transmission of Air Pollutants in Europe) and ICP–IM (International Co-operative Programme on Integrated Monitoring).
After 2004, when Czech Republic joined the EU, NAOK, thanks to its excellent location and long-term homogeneous data series, has been participating in several EU projects. The first was EUSAAR (European Supersites for Atmospheric Aerosol Research), focused on the research of atmospheric aerosols. The essential importance for the advancement of NAOK in the last decade brought participation in ACTRIS RI (Aerosol, Clouds and Trace gases Research Infrastructure). NAOK is a core of Large Research Infrastructure (LRI) ACTRIS Czech Republic (ACTRIS-CZ), a unique platform for the long-term background air quality monitoring and research closely related to climate, environmental and health issues qualified as societal challenges. ACTRIS-CZ represents a national node of the existing European ACTRIS Research Infrastructure (RI) established with the support of the EU 7th Framework Programme INFRA-2010-1-1.1.16 (EU FP7) and ACTRIS-2 project of EU Horizon 2020 (H2020-INFRAIA-2014-2015: Integrating and Opening Existing National and Regional Research Infrastructures of European Interest). In December 2015, ACTRIS was adopted on the ESFRI roadmap 2016 for Research Infrastructures. LRI ACTRIS-CZ RI is based on the long-term collaboration of 4 research partners: Czech Hydrometeorological Institute (CHMI), The Institute of Chemical Process Fundamentals of the CAS (ICPF), Global Change Research Institute of the CAS (GCRI) and Masaryk University (MU) at the research facility of NAOK.

NAOK is a part of the National Air Pollution Monitoring Network (operated by CHMI). All measurements are carried out according to the quality-controlled procedures. This network operates online (automatic analyzers) and offline (samplers) instruments. Filter analyses are done mainly in the central laboratory of immissions in Prague. The data validation procedure is in line with the EC directive 2008/50/EC. An overview of methods of measured components used in this study are listed in Table 1. A detailed description of each method is available in [4].

The statistical method used for the evaluation of long-term trends is based on the nonparametric Mann–Kendall test for the trend and the nonparametric Sen’s method for the magnitude of the trend. Mann–Kendall test is used since missing values are allowed and the data need not conform to any particular distribution. Sen’s method is not greatly affected by gross data errors or outliers, and it can also be computed when data are missing. Sen’s estimator is closely related to the Mann–Kendall test. Mann–Kendall test is recommended and plentifully used for long-term trend evaluation in air quality because it enables one to evaluate non-complete data series and does not require specific distribution of measured values. On the other hand, it is not possible to use it for assessment of short-term variability and annual variation. Due to its properties, the Mann–Kendall test was used to analyze long-term trends of air pollution measurements data in a harmonized way for EMEP Assessment report [5].
The presence of trend is evaluated using Z value. A positive and negative value of Z indicates an upward and downward trend, respectively. The statistics Z has a normal distribution.
The existence and significance of trend is tested by using four different α levels of significance. The different α levels used are , , and .
Trend statistics it is given as a result of the significance level of that trend, marked by 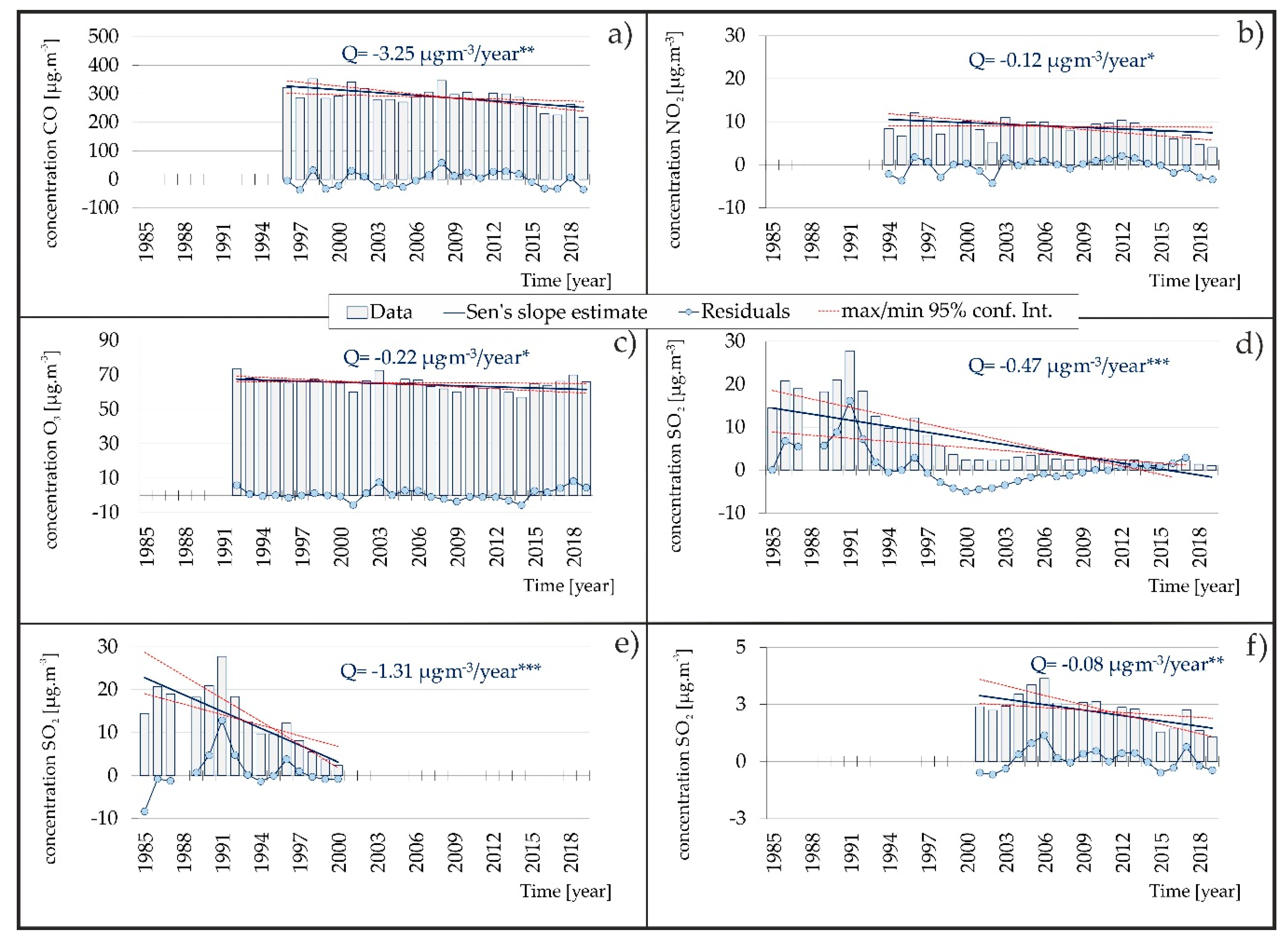 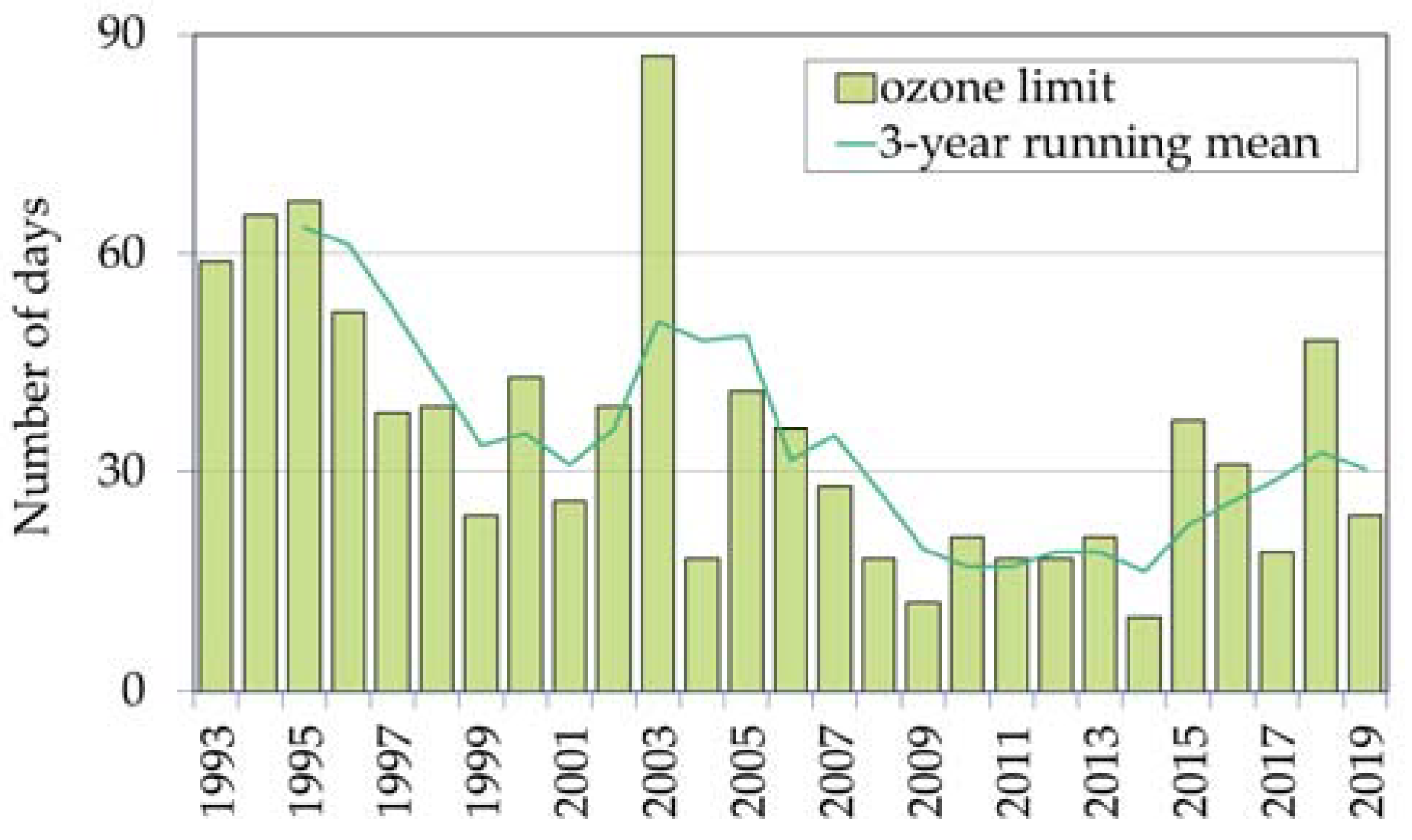