Parameterization of Radiation Fog-Top Height and Methods Evaluation in Tianjin

The Beijing Weather Modification Office conducted an observation experiment in Harbin, Heilongjiang Province under the support of the National Key Research and Development Program of China titled the “Impact of Black Carbon Emission of Agricultural and Living Sources on Climate and Air Quality in East Asia and the associated Climate-Health Effect Assessment.” The observations were conducted in the afternoon of 20 October 2016 and 25 October 2016 during the heating period. The sea level pressure (Figure 1) at 11:00 (Beijing time) on these two days shows that Harbin (indicated with black stars in Figure 1) is located on the edge of a high-pressure and a low-pressure system, respectively, and the weather conditions were fine and partly cloudy. The surface wind speed was not high during the two observations.
Figure 2 shows the distribution of BC emissions in October 2012 based on the output data of the latest Multi-resolution Emission Inventory for China (MEIC) (http://www.meicmodel.org/index.html), He (2012) [31] reported the model framework and 1990–2010 anthropogenic emissions on MEIC. As seen, Harbin and the surrounding areas emit much BC. In the map, Harbin, Daqing, Changchun, and Shenyang are marked. Figure 2 shows that Harbin and Daqing are the major emission regions of BCs in Heilongjiang Province.

The WRF-Chem model [33], which was jointly developed by multiple institutions including the National Center for Atmospheric Research (NCAR) and the National Oceanic and Atmospheric Administration (NOAA), the version 3.8.1 was used in this study. In the modeling, the Lambert projection was used, with a horizontal resolution of 6 km. The number of grid points in the horizontal area was 140 × 140, and the center was located at 124.4° E, 45.2° N. The top of the simulated area was at 100 hPa. The number of vertical layers was 45 layers, and 24 layers were below 1 km. The initial and boundary conditions of the meteorological field were provided by the six-hour global NCEP/NCAR reanalysis Final (FNL) data. The initial conditions and boundary conditions of the chemical substance concentrations were provided by the six-hour Model for Ozone and Related Chemical Tracers-4 (MOZART-4) [34] simulation results.
The physical and chemical process parameterization schemes used in this study are shown in Table 1. For parameterization of cloud and precipitation processes the Lin microphysics scheme [35] together with the Grell–Freitas ensemble cumulus parameterization [36] were employed. The RRTMG short- and long-wave radiation schemes [37] were used to couple with the aerosol scheme to reproduce aerosol–radiation interactions. QNSE-EDMF boundary layer scheme [38] and the unified Noah land surface scheme [39] were applied for boundary layer evolution and land-atmosphere interactions, respectively. The photolysis rate required for photochemical reaction processes is calculated by the Fast-J method [40]. In the calculation process, the scattering and absorption of solar radiation by the atmosphere are considered. The photolysis rate is updated once per hour for the gas-phase chemical module. Wesely parameterization of dry deposition [41,42] was used. The model gas-phase chemical mechanism used Carbon Bond Mechanism Version Z (CBM-Z) [43], which contains 55 substances and 134 chemical reactions. The aerosol chemical scheme used the Model for Simulating Aerosol Interactions and Chemistry (MOSAIC) [44], which includes eight types of aerosols: sulfate, nitrate, ammonium, chloride, sodium, other inorganics, organic carbon, and elemental carbon. Both anthropogenic and natural sources are included in the model. The anthropogenic source used in the model is from MEIC and contains 10 major air pollutants and greenhouse gases (SO2, NOx, CO, NMVOC (Non-Methane Volatile Organic Compound), NH3, CO2, PM2.5, PM10, BC, and OC) and more than 700 anthropogenic sources. BioSource emissions are from the Model of Emissions of Gases and Aerosols from Nature (MEGAN) [45]. Biomass combustion values are from the Fire Inventory from NCAR (FINN) [46]. The simulation time is 36 h from 8:00 on 24 October 2016 to 20:00 on 25 October 2016.

3.1. Airborne Detection Results and the Interpretation

Figure 5 shows the potential temperature and the BC mass concentration detected by the two flights. Based on the potential temperature, it can be seen that the altitudes of the mixing layer top during the flight period on 20 October and 25 October were approximately 1300 m and 1000 m, respectively. The BCs were compressed in the mixing layer, similar to other observations [13,16,24]. In the mixing layer, the BC mass concentration did not change with the altitude on 20 October, which was caused by turbulent mixing. On 25 October, anomalies occurred, that is, there was an elevated layer from the ground to an altitude of 700 m where the BC mass concentration was larger than that at the ground, and a peak value appeared at an altitude of approximately 500 m. The 72-h backward trajectory is calculated using the numerical model, Hybrid Single-Particle Lagrangian Integrated (HYSPLIT, Figure 6a). The starting time was 13:00 (Beijing time, 5:00 UTC) on 25 October 2016. From Figure 6a and the diagram combining the backward trajectory and satellite fire spots (Figure 6b), it can be seen that the air mass at the position of the observed peak value at 5:00 UTC on 25 October (45.6° N, 126.7° E, 500 m ASL) originated at 2500 m ASL in Russia 72 h ago. This air mass, after passing over Inner Mongolia, fell to the ground near Qiqihar, Heilongjiang Province with densely distributed fire spots 48 h prior to the observation. Then, the air mass moved southward along the ground to fire spot areas in Bai Cheng, Jilin Province and rose to 500 m ASL 18 h prior to the observation. After passing over Qiqihar and Daqing at a height parallel to the ground from the northwest direction, the air mass reached Ping Fang District of Harbin at an altitude of 500 m ASL. Therefore, the peak BC mass concentration value observed in the afternoon on 25 October may be related to the horizontal advection of BCs in the surroundings. However, on the vertical cross-section where the backward trajectory (the last 13 h) is located (Figure 7), the distribution of the FNL horizontal wind speed at 14:00 shows no peak at approximately 500 m. Given the low spatial resolution of the FNL analysis data and the lack of horizontal distribution of BC concentrations, we tried to simulate the peak at 500 m ASL and give an interpretation of it using the WRF-Chem model.

BC concentration is simulated by using the WRF-Chem model with schemes written in Section 2.3. Kipling et al [47] showed that point-by-point analysis allowed the model improvements to be demonstrated more clearly, the point-by-point analysis is also used in this paper. To compare the simulation results to the aircraft observation results (shown in Figure 5b), the simulated BC concentration sampled along the flight track at 13:00 on 25 October is plotted (see Figure 8). To reduce the influence of insufficient grid distance on the results, the values in the figure are processed by bilinear interpolation. It is worth mentioning that since the flight path is not vertical (see Figure 4a), neither Figure 8 nor Figure 5b are vertical profiles. As can be seen from Figure 8, this result simulates the peak at the altitude of approximately 500 m, which occurs in the observation results of the aircraft (see Figure 5b), and the peak value in simulation results is close to the observation results, that is, between 3.0 and 4.0 μg/kg. It is a good simulation.

3.1.3. A Numerical Simulation Analysis on the Authenticity of the Elevated BC Concentration Layers

3.1.4. Discussion about the Observation Path

3.2. Simulation Analysis of the Influence of the Turbulence on the Formation of the Elevated BC Layer

3.3. Simulation Analysis of the Formation of the Elevated BC Concentration Layers Due to the Weak Upward Motion

Using aircraft detection, elevated layers in the lower-middle part of the mixing layer were detected in Harbin on the afternoon of 25 October 2016. The vertical distribution of the BC concentration in the lower atmosphere over Harbin from 24 October to 25 October 2016 was numerically simulated using the WRF-Chem model version 3.8.1 based on the actual cases. The results show the following:

This research was supported by the National Key Research and Development Program of China (2016YFA0602001, 2016YFA0602003) and the Natural Science Foundation of Liaoning province (2019-MS-199). The anthropogenic pollution sources were obtained from the Multi-resolution Emission Inventory for China (MEIC) of Tsinghua University. The data were implemented into the WRF-Chem model with the help of Tianliang Zhao’s group. Figure 2 of this study was produced with the help of Lei Zhang. We thank all of them here! 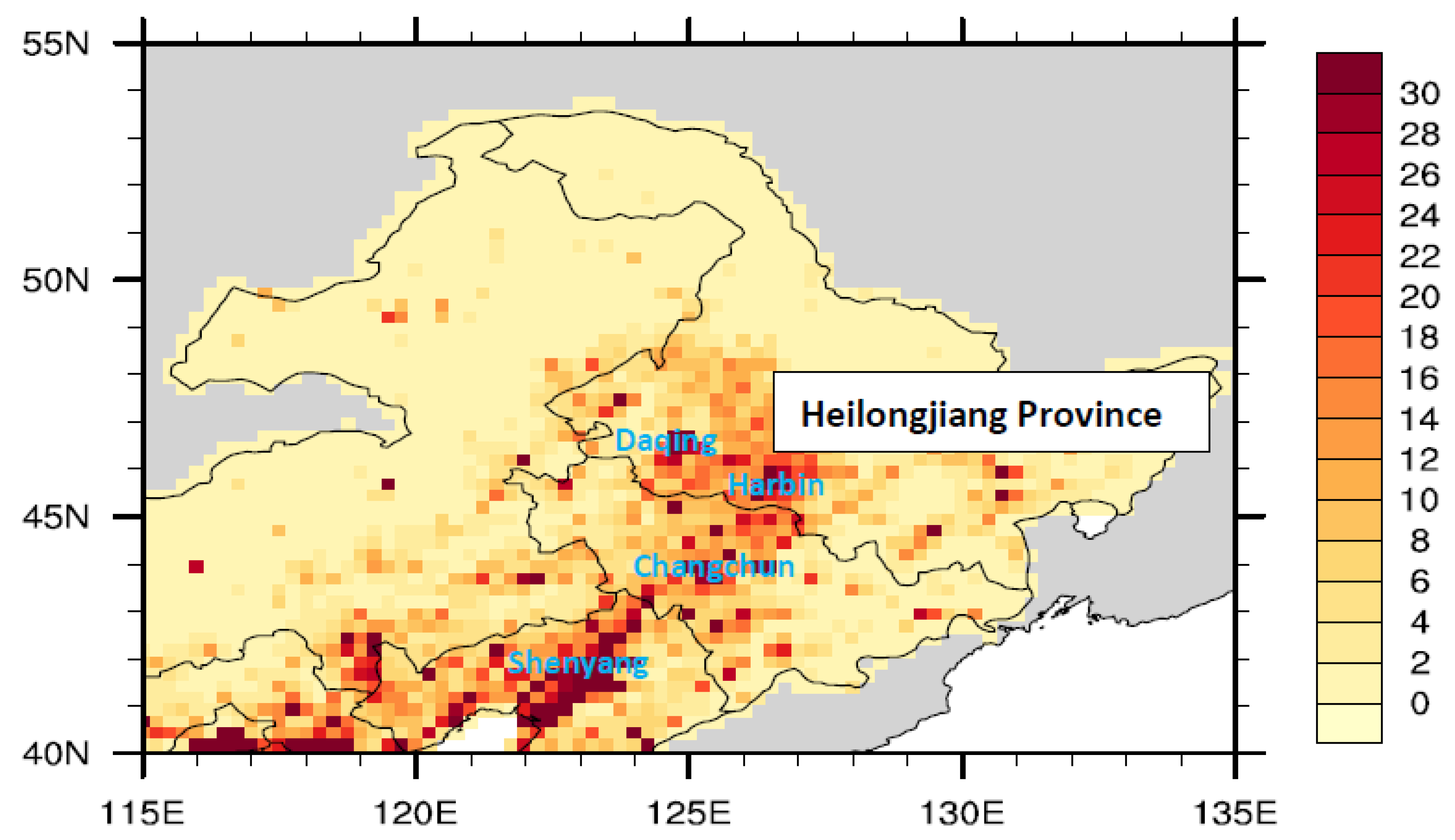 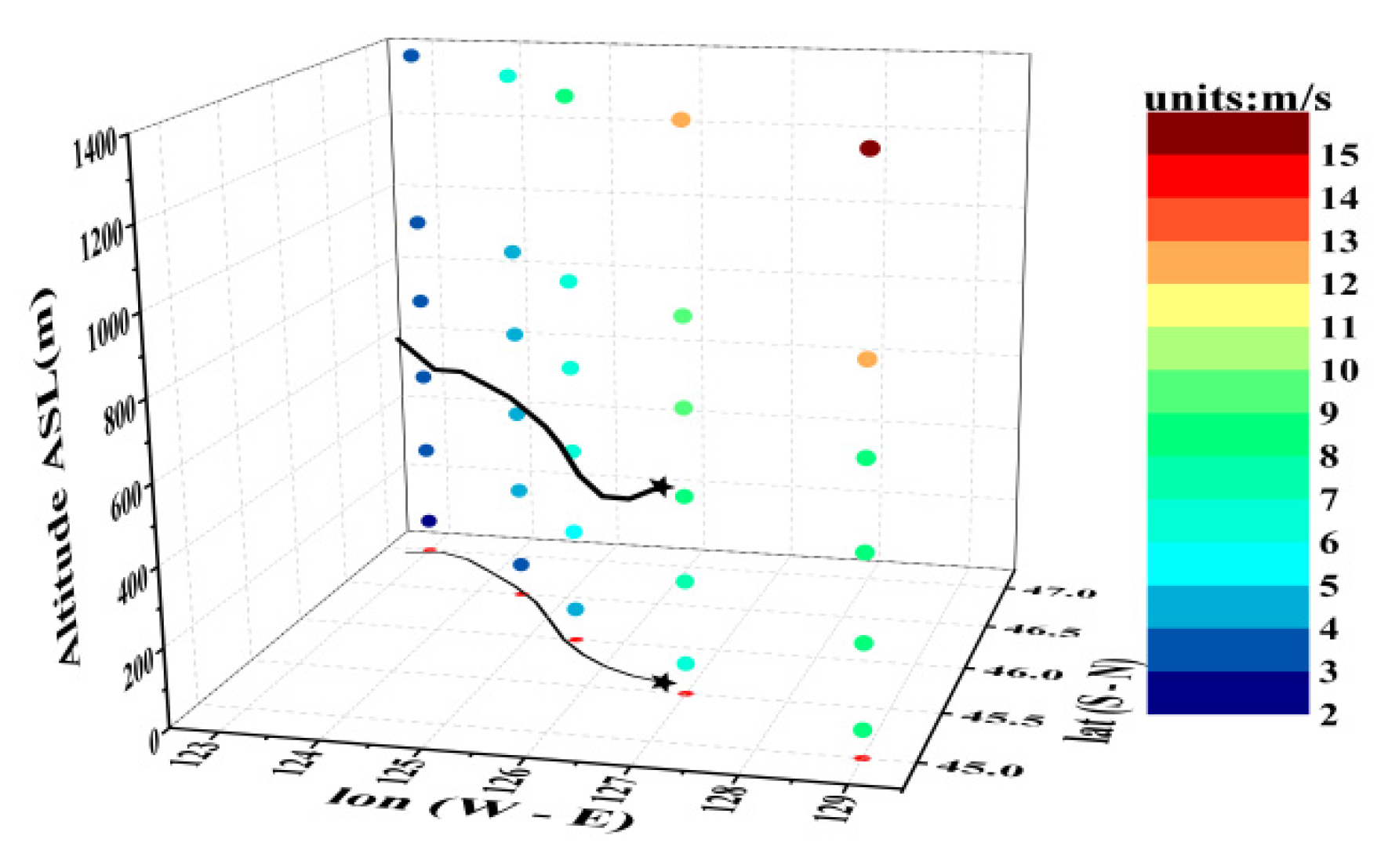 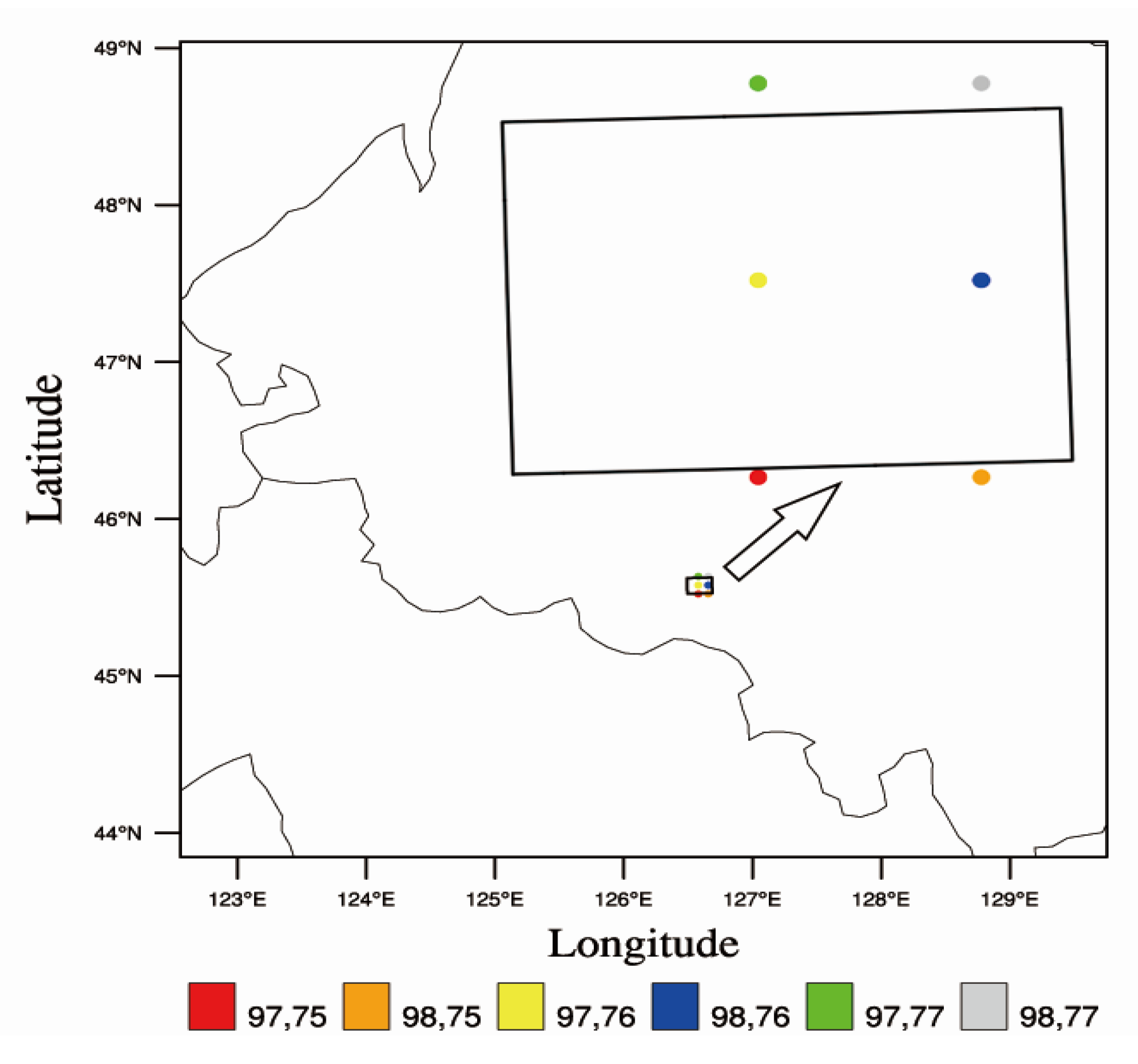 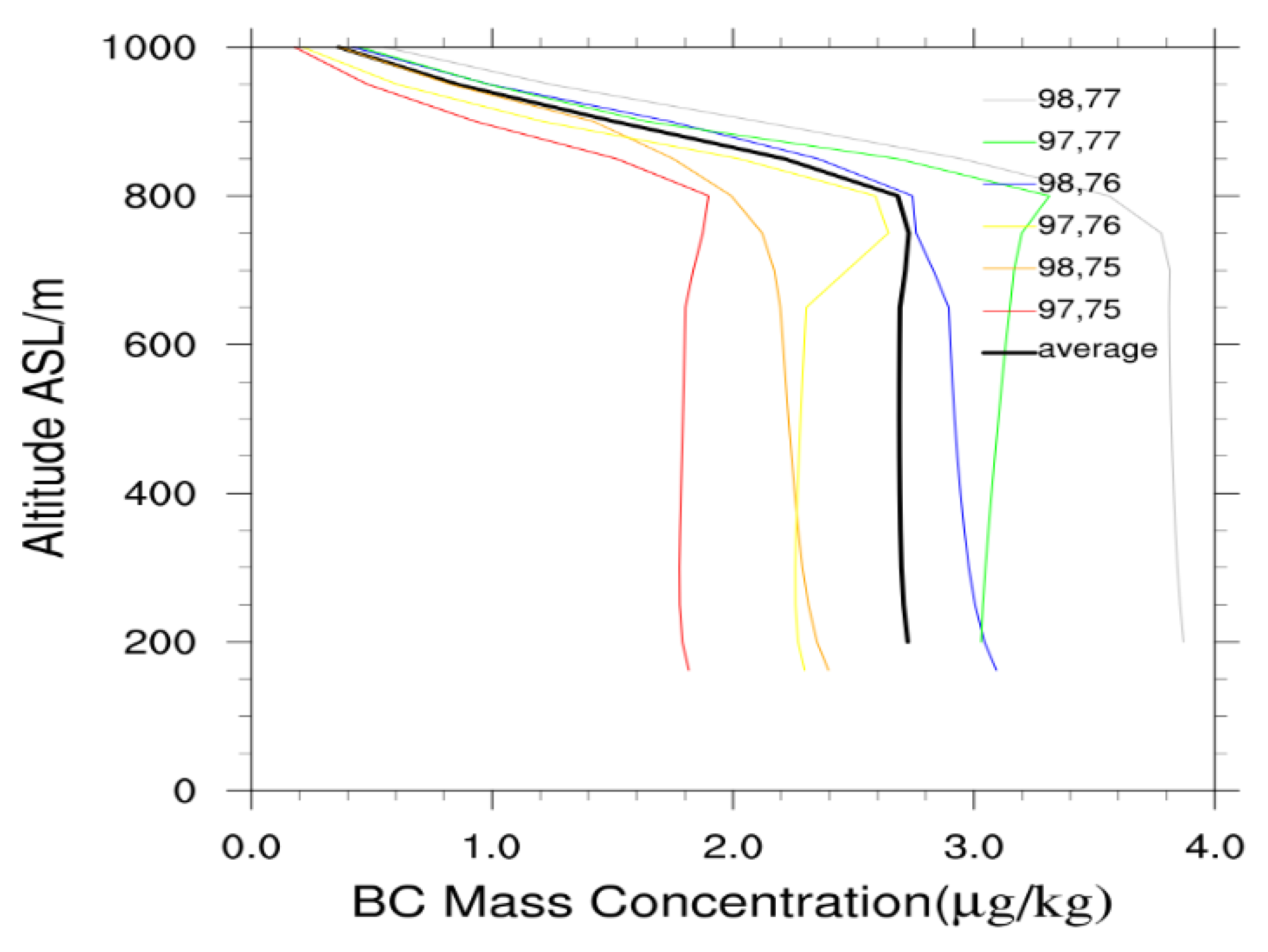 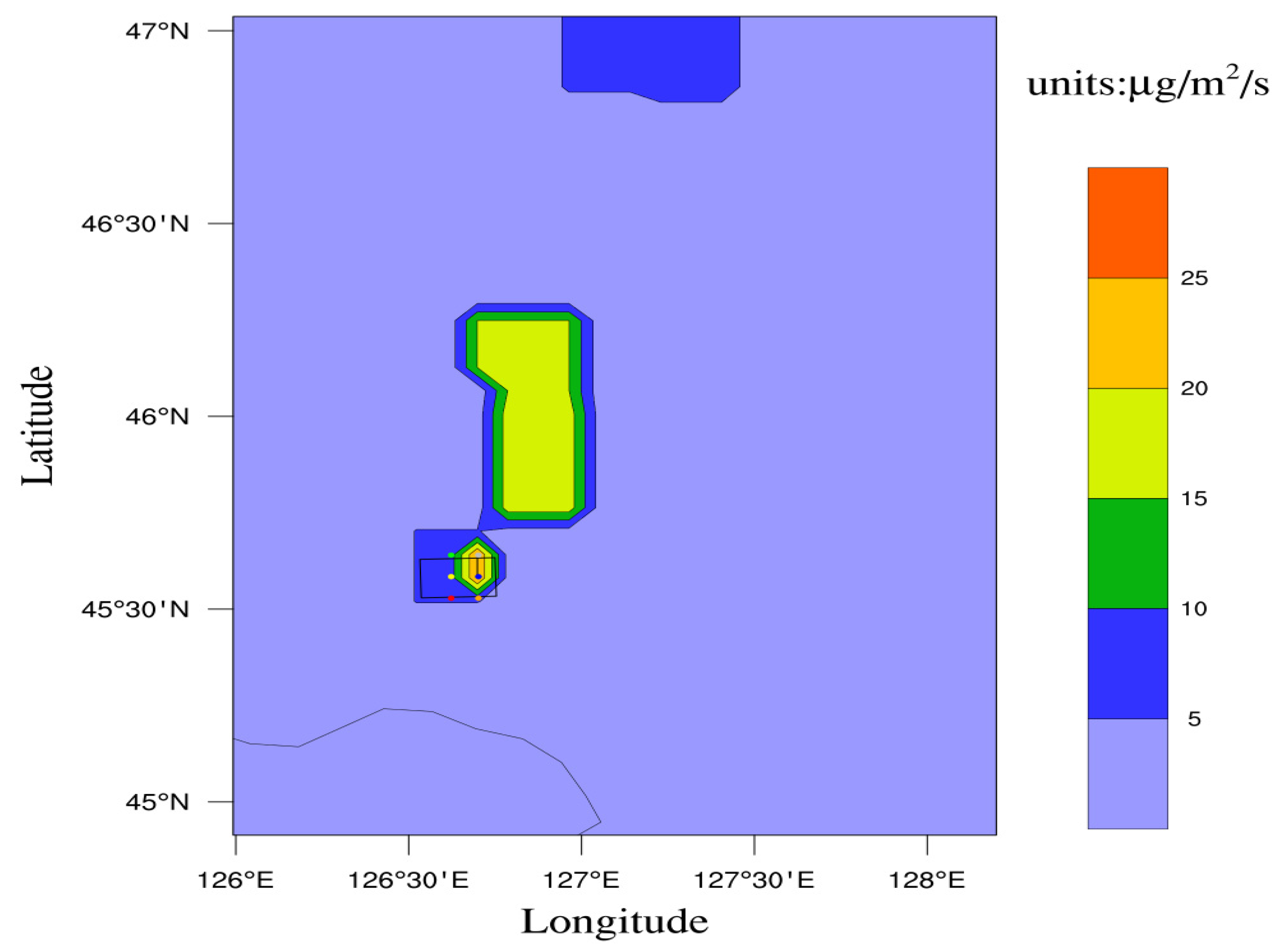 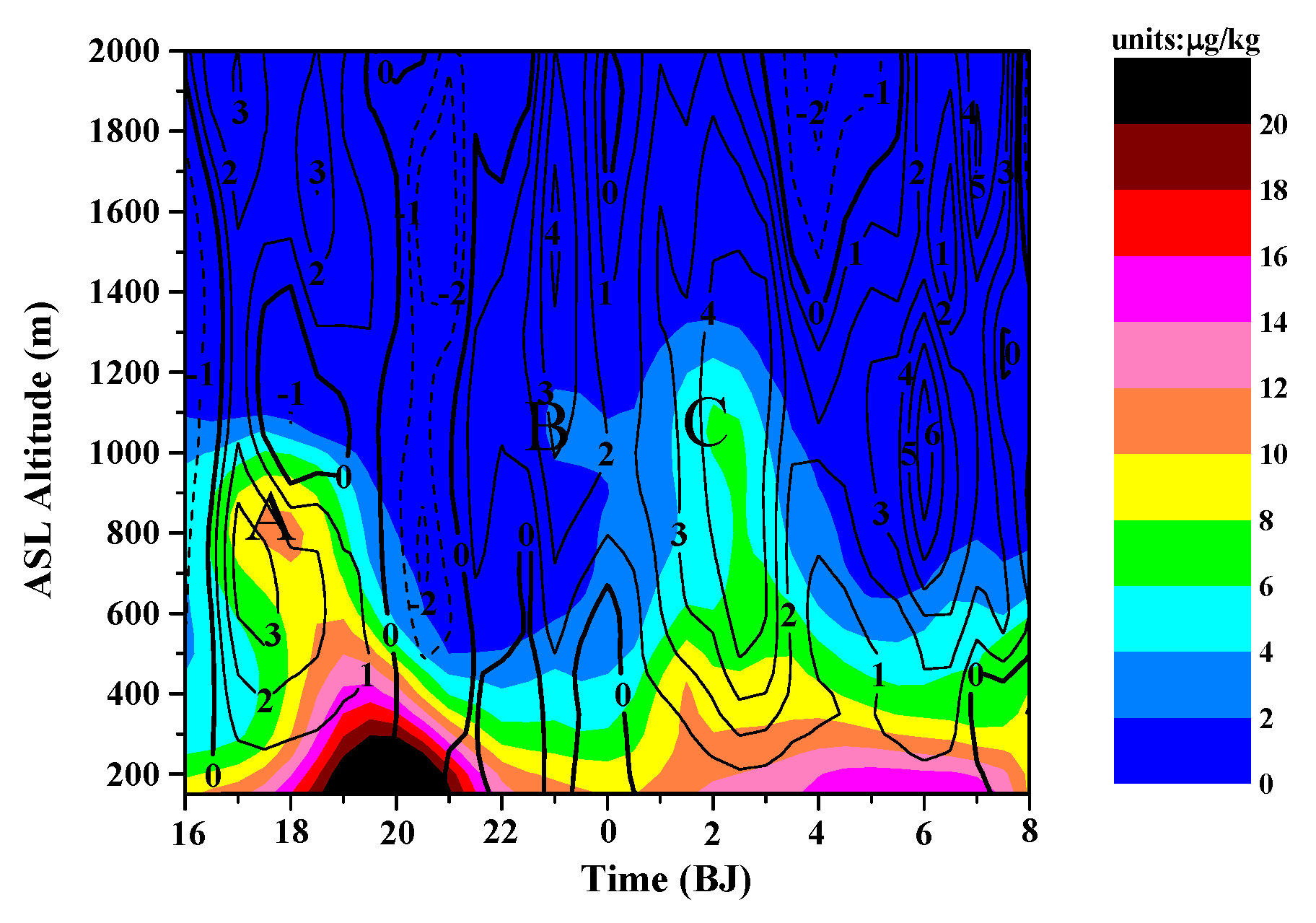 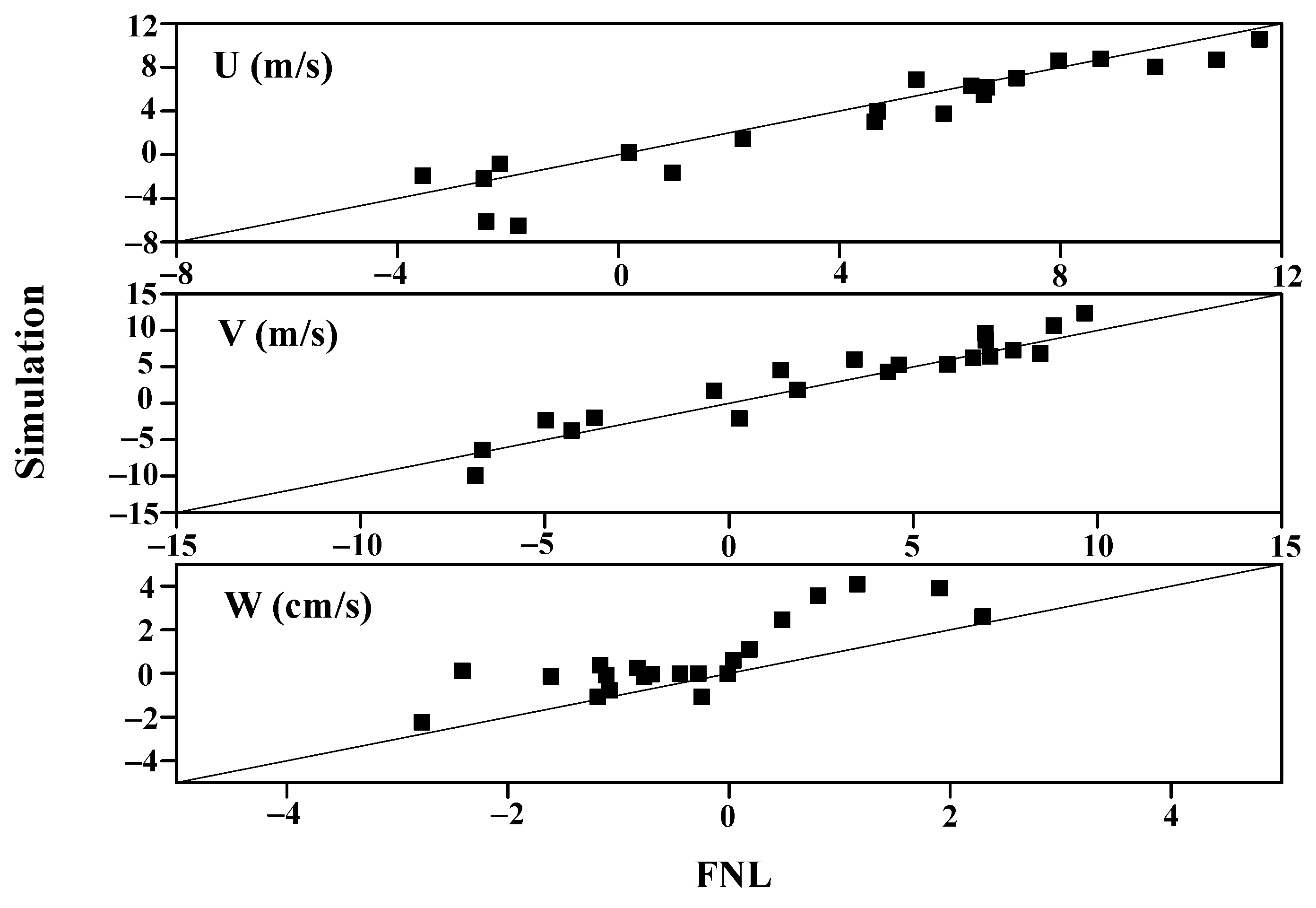