Aerosols and organic source apportionment were characterized using data collected during two measurement campaigns. These campaigns were conducted during the summer and winter seasons at Măgurele, a site located southwest of Bucharest, the capital of Romania and one of the largest cities in southeastern Europe (raking seven in Europe based on population). The summer campaign was conducted between 7 June–18 July 2012, and the winter campaign from 14 January–6 February 2013. Approximately 50% of the organic fraction contribution to the total submicron particulate matter sampled by aerosol mass spectrometer was evidenced during both seasons. Submicronic organic aerosol sources were quantified using the positive matrix factorization approach. For warm (summer) and cold (winter) seasons, more than 50% from total organics was represented by oxidized factors. For the summer season, separate analyses were conducted on data influenced by urban and non-urban sources. The influence of pollution from Bucharest on the measurement site was observed in aerosol concentration and composition. The primary organic aerosols have different contribution percentage during summer, depending on their main origin. The influence of Bucharest, during summer, included cooking contribution of 13%. The periods with more regional influence were characterized by lower contribution from traffic and biomass burning in a total proportion of 28%. In winter, the influence of local non-traffic sources was dominant. For more than 99% of the measurements, the biomass burning indicator, , exceeded the background value, with residential heating being an important source in this area. Fossil fuel contribution was confirmed for one week during the winter campaign, when C analysis of total and elemental carbon revealed the presence of 17% fossil contributions to total carbon. Mass spectrometry, C and absorption data suggest biomass burning as the predominant primary source of organic aerosols for the winter season. View Full-Text
Keywords: aerosol chemical composition; aerosol sources; seasonal characteristics aerosol chemical composition; aerosol sources; seasonal characteristics
►▼ Show Figures 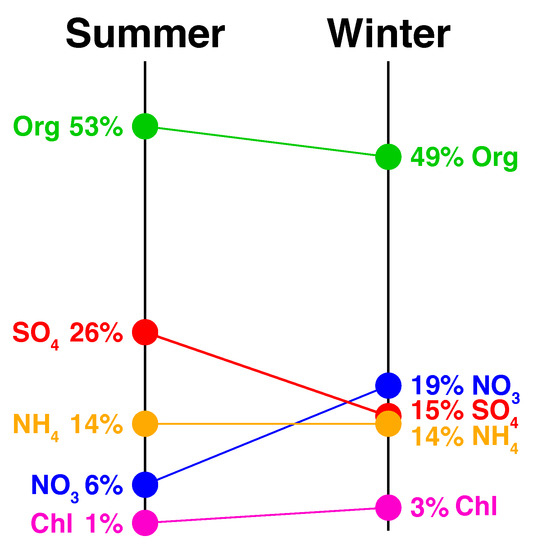