Characterization of Total OH Reactivity in a Rapeseed Field: Results from the COV3ER Experiment in April 2017

Croplands remain poorly studied ecosystems in terms of total hydroxyl radical (OH) reactivity, especially when compared to forests. As part of the COV3ER project, total OH reactivity (ROH), defined as the total loss rate of OH due to its reaction with reactive species in the atmosphere, was characterized in a rapeseed field (Grignon, France) during the blooming season in April 2017. Measurements were performed in a dynamic chamber as well as in ambient air using the Comparative Reactivity Method (CRM). Complementary measurements of organic (including a proton transfer reaction quadrupole ion–time of flight mass spectrometry, PTRQi-ToFMS) and inorganic compounds were also performed in order to calculate the expected OH reactivity and evaluate the missing fraction. Measured ROH varied diurnally in the dynamic chamber (mROHchamber) with maxima around 20 to 30 s−1 at midday and minima during dark hours, following the variability of the enclosed branch VOCsrapeseed, which is light- and temperature-dependent. Oxygenated VOCs were the major compounds emitted by the rapeseed crop. However, in terms of contribution to OH reactivity, isoprene accounted for 40% during the daytime, followed by acetaldehyde (21%) and monoterpenes (18%). The comparison between mROHchamber and calculated ROH (cROHchamber) exhibited little or no difference during dark hours, whereas a maximum difference appeared around midday, highlighting a significant missing fraction (46% on average during daytime) mainly related to biogenic temperature- and/or light-dependent emissions. View Full-Text
Keywords: OH reactivity; biogenic VOCs; CRM-PTRMS; PTRQi-ToFMS; crops OH reactivity; biogenic VOCs; CRM-PTRMS; PTRQi-ToFMS; crops
►▼ Show Figures 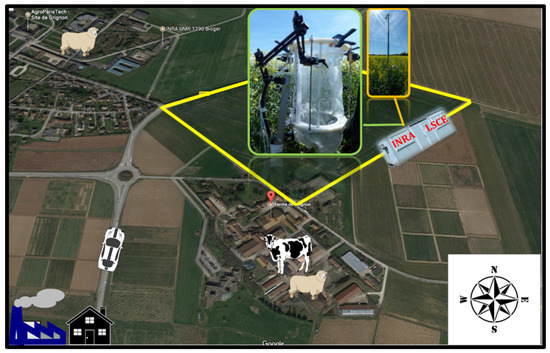