Odour in the atmosphere is usually characterized by an intermittent time series of high peaks and periods of low (or zero) concentrations. The peak-to-mean ratio (PMR) is commonly used to estimate short-term peaks from long-term averages to assess the odour impact. The objective of this study was to quantify the peak-to-mean ratio of odour intensity (PMR_OI) in the atmosphere near swine operations. Fifteen human assessors (sniffers) were trained to use an 8 point odour intensity scale to measure odour intensity in the ambient air near two swine operations. In each measurement session, the sniffers were placed 0° (in the direction of wind), 30°, and 45° from the wind directions at 100, 500, and 1000 m from the swine operations to sniff odour in the air every 10 s for 30 min. The results showed that odour in the atmosphere was intermittent. The intermittency (% of time when odour was detected) increased with the averaging time and decreased with the distance from the odour source and the direction from the wind. The measured intermittency ranged from 13% to 85%. The PMR_OI increased with the averaging time, the distance from the source, and the direction from the wind. In the wind direction, the largest difference in PMR_OI between 1 and 30 min averaging times was 68% (2.5 vs. 4.2), which occurred at 1000 m from the odour source under stability class B. The average PMR_OI increased from 1.5 at 100 m to 3.5 at 1000 m. Atmospheric stability had a noticeable effect on PMR_OI. At 1000 m, the 30 min PMR_OI decreased from 4.2 at stability class B (unstable) to 2.4 at E (slightly stable). View Full-Text
Keywords: swine operation; odour; atmospheric dispersion; human sniffer; peak-to-mean ratio; intermittency; atmospheric stability swine operation; odour; atmospheric dispersion; human sniffer; peak-to-mean ratio; intermittency; atmospheric stability
►▼ Show Figures 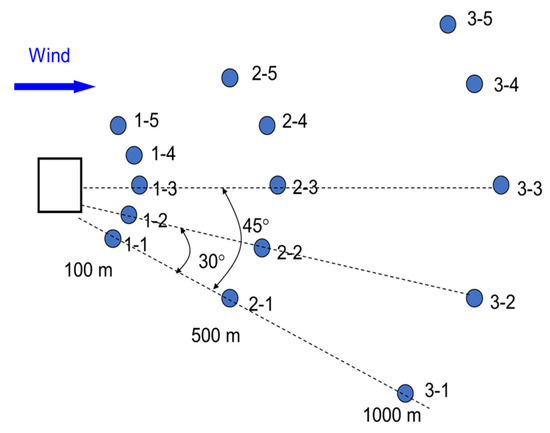