This study assessed recent (2015) and past (2001) levels of air pollution in four regions of Poland by moss monitoring. The surveyed regions encompassed, among others, copper and zinc-lead industrial districts, large urban agglomerations and an area away from pollution sources. Moss (Pleurozium schreberi) was sampled from 117 sites. In 2001, the concentrations of Cd, Cr, Cu, Fe, Ni, Pb, and Zn were determined. In 2015, 10 extra elements were analyzed in addition to these metals. The results showed that the regions substantially differed in the chemical profile of air pollution, which corresponded well with the type of industry and the degree of industrialization and urbanization. There was also a significant change in air pollution between the 2001 and 2015 surveys, but it was inconsistent: its magnitude and direction were both metal-dependent and region-dependent. Namely, while the levels of some metals (e.g., Cd and Pb) decreased, other metals (e.g., Cr and Ni) showed the opposite trend. Importantly, these decreases (or increases) were usually limited to regions of low concentrations of a given metal. The results suggest that air quality has not significantly improved recently, but the type of emissions has changed. It seems that the importance of non-industrial pollution sources has increased. View Full-Text
Keywords: biomonitoring; moss; Pleurozium schreberi; air pollution; trace metal; temporal pattern biomonitoring; moss; Pleurozium schreberi; air pollution; trace metal; temporal pattern
►▼ Show Figures 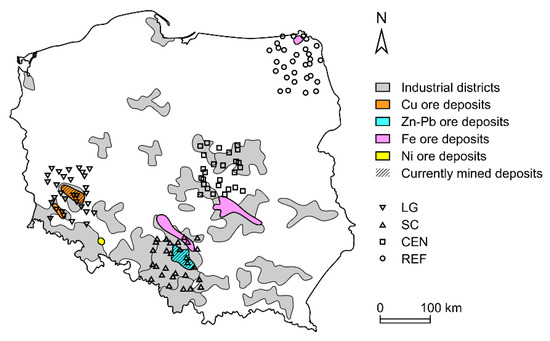 Kapusta, P.; Godzik, B. Temporal and Cross-Regional Variability in the Level of Air Pollution in Poland—A Study Using Moss as a Bioindicator. Atmosphere 2020, 11, 157.


Kapusta P, Godzik B. Temporal and Cross-Regional Variability in the Level of Air Pollution in Poland—A Study Using Moss as a Bioindicator. Atmosphere. 2020; 11(2):157.


Kapusta, Paweł; Godzik, Barbara. 2020. "Temporal and Cross-Regional Variability in the Level of Air Pollution in Poland—A Study Using Moss as a Bioindicator." Atmosphere 11, no. 2: 157.