Monitoring and Modeling Roof-Level Wind Speed in a Changing City

Surface and Aerodynamic Parameters Estimation for Urban and Rural Areas

Numerical weather prediction models require an accurate parametrization of the energy budget at the air-ground interface, that can be obtained only through long-term atmospheric boundary layer measurements at different spatial and temporal scales. Despite their importance, such measurements are still scarce even in well-characterized areas. In this paper, a three-year dataset from four micrometeorological stations run by the Regional Agency for Environmental Protection of Lazio was analyzed to estimate albedo, zero-displacement height, roughness length and surface properties over Rome and its suburbs, characterizing differences and interconnections between urban, suburban and rural areas of the same municipality. The integral albedo coefficient at the zenith for the urban station was found to be almost twice that for suburban and rural stations. The zero-displacement height of the urban site was strongly dependent on wind direction, with values varying between 12.0 and 17.8 m, while the roughness length (≈1.5 m) was almost independent of upwind direction, but it was significantly higher than the typical values calculated for rural stations (≈0.4 m). The apparent thermal capacities and thermal conductivity at all the non-urban sites were in fair agreement with each other and typical of soils with relatively low water content, as expected for a relatively dry Mediterranean area like Rome, while the apparent thermal diffusivity reflected the presence of different soil types. View Full-Text
Keywords: boundary layer scheme; surface parameters; albedo; aerodynamic properties; urban meteorology; numerical weather prediction boundary layer scheme; surface parameters; albedo; aerodynamic properties; urban meteorology; numerical weather prediction
►▼ Show Figures 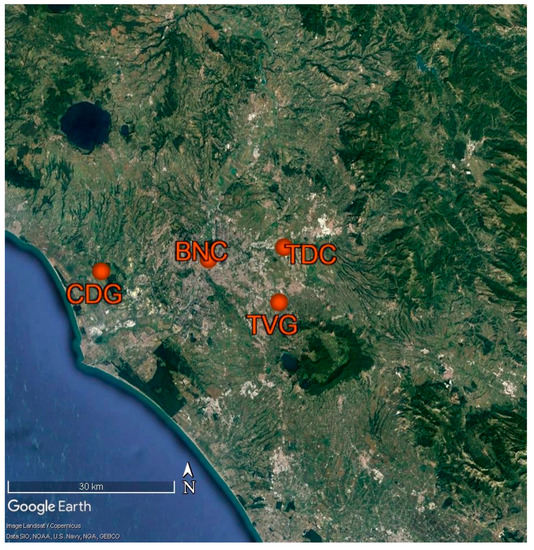