Heat and Ozone Pollution Waves in Central and South Europe—Characteristics, Weather Types, and Association with Mortality

Air pollution and hot temperatures present two major health risks, especially for vulnerable groups such as children, the elderly, and people with pre-existing conditions. Episodes of high ozone concentrations and heat waves have been registered throughout Europe and are expected to continue to grow due to climate change. Here, several different heat and ozone wave definitions were applied to characterize the wave-type extremes for two climatically different regions, i.e., Portugal (South Europe) and Bavaria (Central Europe), and their impacts were evaluated considering each type of hazard independently but also when they occur simultaneously. Heat and ozone waves were analyzed with respect to the underlying atmospheric circulation patterns and in terms of their association with human mortality. Heat waves were identified as the most frequent wave type and, despite different climate settings, a comparable exposure to heat and ozone waves was found in Central and South Europe. Waves were associated with in-situ built-up as well as with advection of air masses. However, in Bavaria waves showed the strongest connection with autochthonous weather conditions, while for Portugal, the strongest relationship appeared for eastern and north-eastern inflow. The most severe events, as measured by excess mortality, were always associated to compound heat-ozone waves. View Full-Text
Keywords: heat waves; ozone pollution waves; compound events; health; synoptic conditions; Bavaria; Portugal heat waves; ozone pollution waves; compound events; health; synoptic conditions; Bavaria; Portugal
►▼ Show Figures 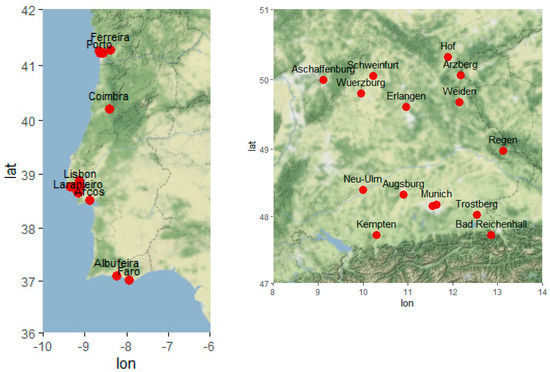