The Aerodynamic Gradient Method: Implications of Non-Simultaneous Measurements at Alternating Heights
Next Article in Special Issue

A Preliminary Spatial Analysis of the Association of Asthma and Traffic-Related Air Pollution in the Metropolitan Area of Calgary, Canada

We performed a preliminary spatial analysis to assess the association of asthma emergency visits (AEV) with ambient air pollutants (NO2, PM2.5, PM10, Black Carbon, and VOCs) over Calgary, Canada. Descriptive analyses identify spatial patterns across the city. The spatial patterns of AEV and air pollutants were analyzed by descriptive and spatial statistics (Moran’s I and Getis G). The association between AEV, air pollutants, and socioeconomic status was assessed by correlation and regression. A spatial gradient was identified, characterized by increasing AEV incidence from west to east; this pattern has become increasingly pronounced over time. The association of asthma and air pollution is consistent with the location of industrial areas and major traffic corridors. AEV exhibited more significant associations with BTEX and PM10, particularly during the summer. Over time, AEV decreased overall, though with varying temporal patterns throughout Calgary. AEV exhibited significant and seasonal associations with ambient air pollutants. Socioeconomic status is a confounding factor in AEV in Calgary, and the AEV disparities across the city are becoming more pronounced over time. Within the current pandemic, this spatial analysis is relevant and timely, bearing potential to identify hotspots linked to ambient air pollution and populations at greater risk. View Full-Text
Keywords: air pollution; asthma; spatial analysis; traffic-related air pollution; environmental health air pollution; asthma; spatial analysis; traffic-related air pollution; environmental health
►▼ Show Figures 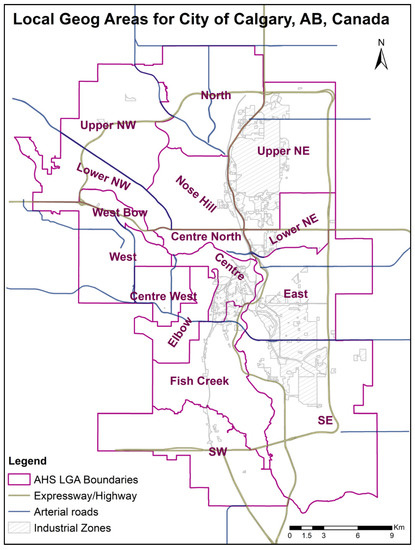