UV Index Forecasting under the Influence of Desert Dust: Evaluation against Surface and Satellite-Retrieved Data
Previous Article in Special Issue

A polarimetric radar method to estimate mean shapes of ice hydrometeors was applied to several snowfall and ice cloud events observed by operational and research weather radars. The hydrometeor shape information is described in terms of their aspect ratios, r, which represent the ratio of particle minor and major dimensions. The method is based on the relations between depolarization ratio (DR) estimates and aspect ratios. DR values, which are a proxy for circular depolarization ratio, were reconstructed from radar variables of reflectivity factor, Ze, differential reflectivity, ZDR, and copolar correlation coefficient ρhv, which are available from radar systems operating in either simultaneous or alternate transmutation of horizontally and vertically polarized signals. DR-r relations were developed for retrieving aspect ratios and their sensitivity to different assumptions and model uncertainties were discussed. To account for changing particle bulk density, which is a major contributor to the retrieval uncertainty, an approach is suggested to tune the DR-r relations using reflectivity-based estimates of characteristic hydrometeor size. The analyzed events include moderate snowfall observed by an operational S-band weather radar and a precipitating ice cloud observed by a scanning Ka-band cloud radar at an Arctic location. Uncertainties of the retrievals are discussed. View Full-Text
Keywords: polarimetric radar; depolarization ratio; snowfall; ice clouds; hydrometeor shape polarimetric radar; depolarization ratio; snowfall; ice clouds; hydrometeor shape
►▼ Show Figures 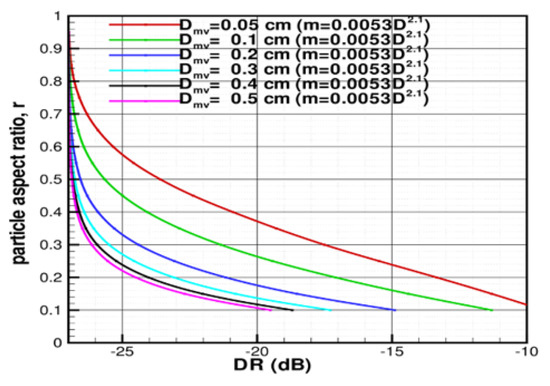