The Uncharacteristic Occurrence of the June 2013 Biomass-Burning Haze Event in Southeast Asia: Effects of the Madden-Julian Oscillation and Tropical Cyclone Activity

Particle size distribution, water soluble ions, and black carbon (BC) concentration in a long-term haze-fog episode were measured using a wide-range particle spectrometer (WPS), a monitor for aerosols and gases (MARGA), and an aethalometer (AE33) in Nanjing from 16 to 27 November, 2018. The observation included five processes of clean, mist, mix, haze, and fog. Combined with meteorological elements, the HYSPLIT model, and the IMPROVE model, we analyzed the particle size distribution, chemical composition, and optical properties of aerosols in different processes. The particle number size distribution (PNSD) in five processes differed: It was bimodal in mist and fog and unimodal in clean, mix, and haze. The particle surface area size distribution (PSSD) in different processes showed a bimodal distribution, and the second peak of the mix and fog processes shifted to a larger particle size at 480 nm. The dominant air masses in five processes differed and primarily originated in the northeast direction in the clean process and the southeast direction in the haze process. In the mist, mix, and fog processes local air masses dominated. NO3− was the primary component of water soluble ions, with the lowest proportion of 45.6% in the clean process and the highest proportion of 53.0% in the mix process. The ratio of NH4+ in the different processes was stable at approximately 23%. The ratio of SO42− in the clean process was 26.2%, and the ratio of other processes was approximately 20%. The average concentration of BC in the fog processes was 10,119 ng·m−3, which was 3.55, 1.80, 1.60, and 1.46 times that in the processes of clean, mist, mix, and haze, respectively. In the different processes, BC was primarily based on liquid fuel combustion. NO3−, SO42−, and BC were the main contributors to the atmospheric extinction coefficient and contributed more than 90% in different processes. NO3− contributed 398.43 Mm−1 in the mix process, and SO42− and BC contributed 167.90 Mm−1 and 101.19 Mm−1, respectively, during the fog process. View Full-Text
Keywords: aerosol; size distribution; chemical composition; optical properties; Yangtze River Delta aerosol; size distribution; chemical composition; optical properties; Yangtze River Delta
►▼ Show Figures 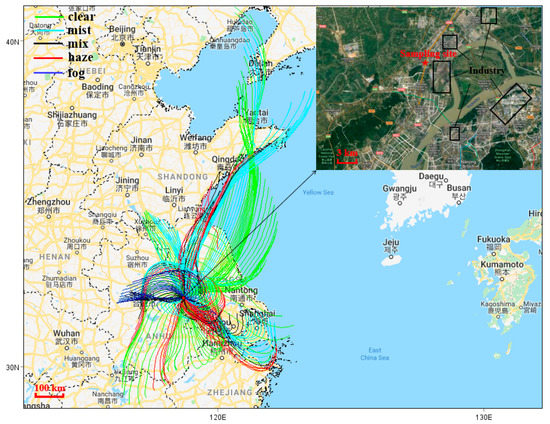