China has a complex climate due to its topography [30]. Mainland China is generally divided into three different climatic zones: Arid region with annual precipitation below 200 mm, humid region with annual precipitation more than 800 mm, and transitional region with annual precipitation from 200 to 800 mm [31]. The arid region mainly includes Xinjiang province and western Inner Mongolia Plateau. The humid region is mainly South China. The transitional region mainly includes North China Plain, Northeast Plain, and part of Tibetan Plateau, where there is more rain in summer but less in winter. Known as the “The Third Pole”, the Tibetan Plateau is the highest and most unique geographical unit on earth [32]. It is one of the most sensitive regions to global climate change and its hydrological processes are quite different from that of other regions of China [33,34]; thus, it is regarded as a separate typical region in this study. The humid, transitional, and dry regions, as well as the Tibetan Plateau, are shown in Figure 1.

The evapotranspiration (ET) and potential evapotranspiration (PET) data from the GLEAM v3.0a (Global Land Evaporation Amsterdam Model) product were used in this study, which span the period from 1980 to 2015 with a spatial resolution of 0.25°. The GLEAM model is a simplified land model, which is fully dedicated to estimating the terrestrial evaporation and root zone soil moisture based on satellite data [35]. It comprises a set of algorithms using multiyear satellite observations to estimate the components of terrestrial ET. The PET is calculated within the Priestley–Taylor equation via the observations of net radiation and near-surface air temperature [36]. The 2-m air temperature and the top layer (0–7 cm) volumetric soil moisture from the ERA-Interim reanalysis data were used [37].

This study used a diagnostic method to estimate the long-term soil moisture–temperature coupling over China in different seasons, which is based on two energy balances of ET and PET. The partitioning of the land energy is expressed in Equation (1), where Rn refers to the surface net radiation, G means the ground heat flux, and is the latent heat of vaporization, which can be captured from near-surface air temperature; the ground heat flux is negligible in this study [36,38].
When the annual time series of E, , , and near-surface temperature (T) are available, the diagnostic method could be used to estimate the long-term soil moisture–temperature coupling [17], where the metric () can be calculated as: where means Pearson’s correlation coefficient, and is the sensible heat flux. Using we can derive an indicator of the long-term soil moisture–temperature coupling, which can be considered as a multi-year average. When considering the , , and (the standard deviations of T, H, and ), Equation (1) could also be expressed in another form as covariances:
To understand the related heating processes between land and atmosphere during the heatwave events, we used a different diagnostic method based on daily data to derive the soil moisture–temperature coupling at daily scale [8], and the metric () is defined as: where , , and indicate the averages of T, H, and over a long term. It can be simplified as: where represents the anomalies of T, and is equal to and indicates the contribution of soil moisture deficit to sensible heat flux. When there is sufficient soil moisture for the atmospheric demand, this energy term will be zero, and it may increase under arid condition. Only if the potential influence of soil moisture on temperature is accompanied by a large anomalous value of temperature is the local energy balance likely to control air temperature [11].
The and the are two coupling metrics at different time scales; the former includes the long-term record in terms of correlation coefficients to evaluate long-term climatology, while the latter expresses anomalies of one day in terms of standard deviations to evaluate daily extreme. When and values are greater than zero, then the higher the value the stronger soil moisture–temperature coupling. If values are less than or equal to zero, there is no coupling [17].

There was a heatwave from 20 June to 4 July in 2009 in North China. Although it was not as severe as the mega-heatwave in Southeast China in 2013, the continuous hot weather in the North China plain was rare since 1949 [50]. At the end of June, an unprecedented heatwave hit Hebei and Shandong provinces, setting new temperature records. By early July, the heatwave gradually dissipated in North China and the high temperature shifted to Southern China [51]. The cause analysis of this event mainly focused on the effect of El Niño and is typical of the high-pressure systems [49]. In addition, the soil moisture deficit of North China would increase the sensible heat flux and influence the atmospheric boundary layer temperature, conducive to strengthening the subtropical high and causing a heatwave [52]. Figure 6a–c depicts the coupling metric π, as well as the soil moisture and temperature anomalies referring to multi-year average of 1980–2013 during the heatwave (20 June–4 July) in North China in 2009. Where there is the strongest coupling, there is significant soil moisture deficit and maximum temperature anomalies.
Figure 6d–f is analogous to Figure 5d–f, dividing the study period into pre-heatwave (the left panel), the mega heatwave (the middle panel), and post-heatwave (the right panel). It appears that the heat anomalies () and the temperature anomalies () reached their maximum values during the heatwave, while such anomalies existed in neither the left nor the right panel. In Figure 6f, we show and for the period 1 June–31 August, averaged within a small region in the epicenter of the heatwave (marked in Figure 6e). Similarly, it is obvious that the land–atmosphere coupling is strongest with the largest π values during the mega heatwave 20 during June to 4 July, when there is the largest heat and temperature anomalies associated with a significant soil moisture deficit.

Q.Y. and G.W. conceived and designed the overall project, and wrote most of sections of the manuscript. C.Z. and D.F.T.H. performed methodology and data analysis. D.L., X.M. and M.Z. supplied suggestions and comments for the manuscript. All authors have read and agreed the published version of the manuscript.

All authors are grateful to the anonymous reviewers and editors for their constructive comments on earlier versions of the manuscript. 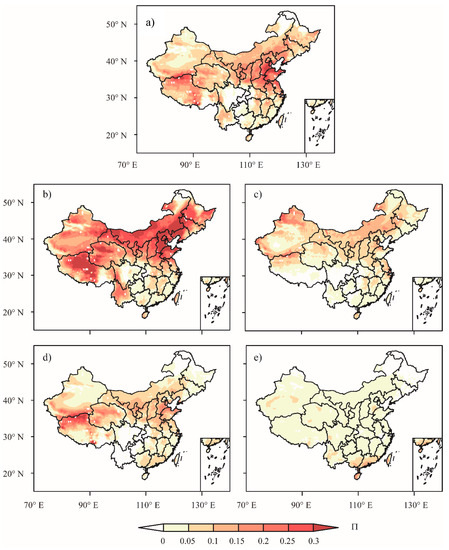 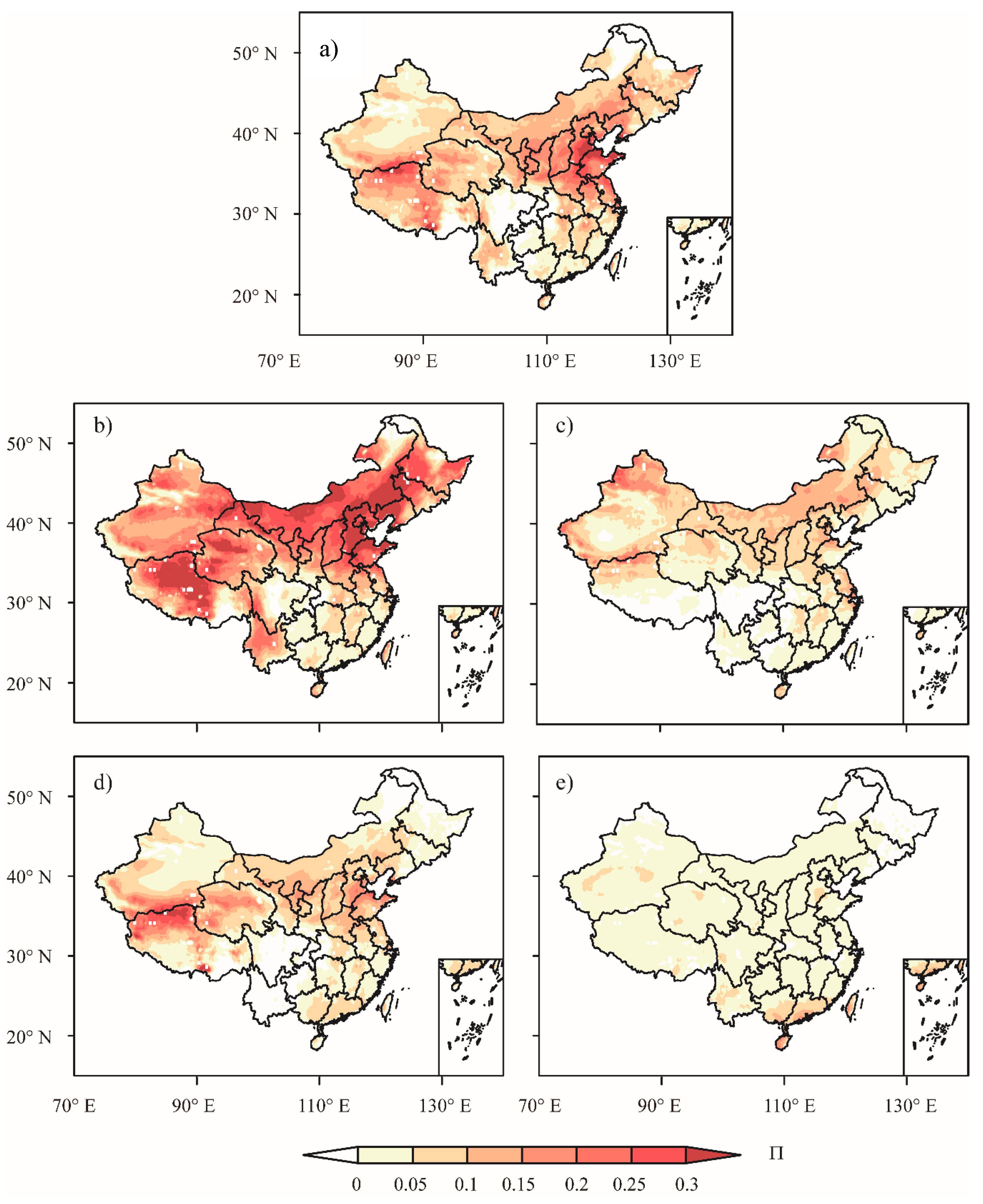 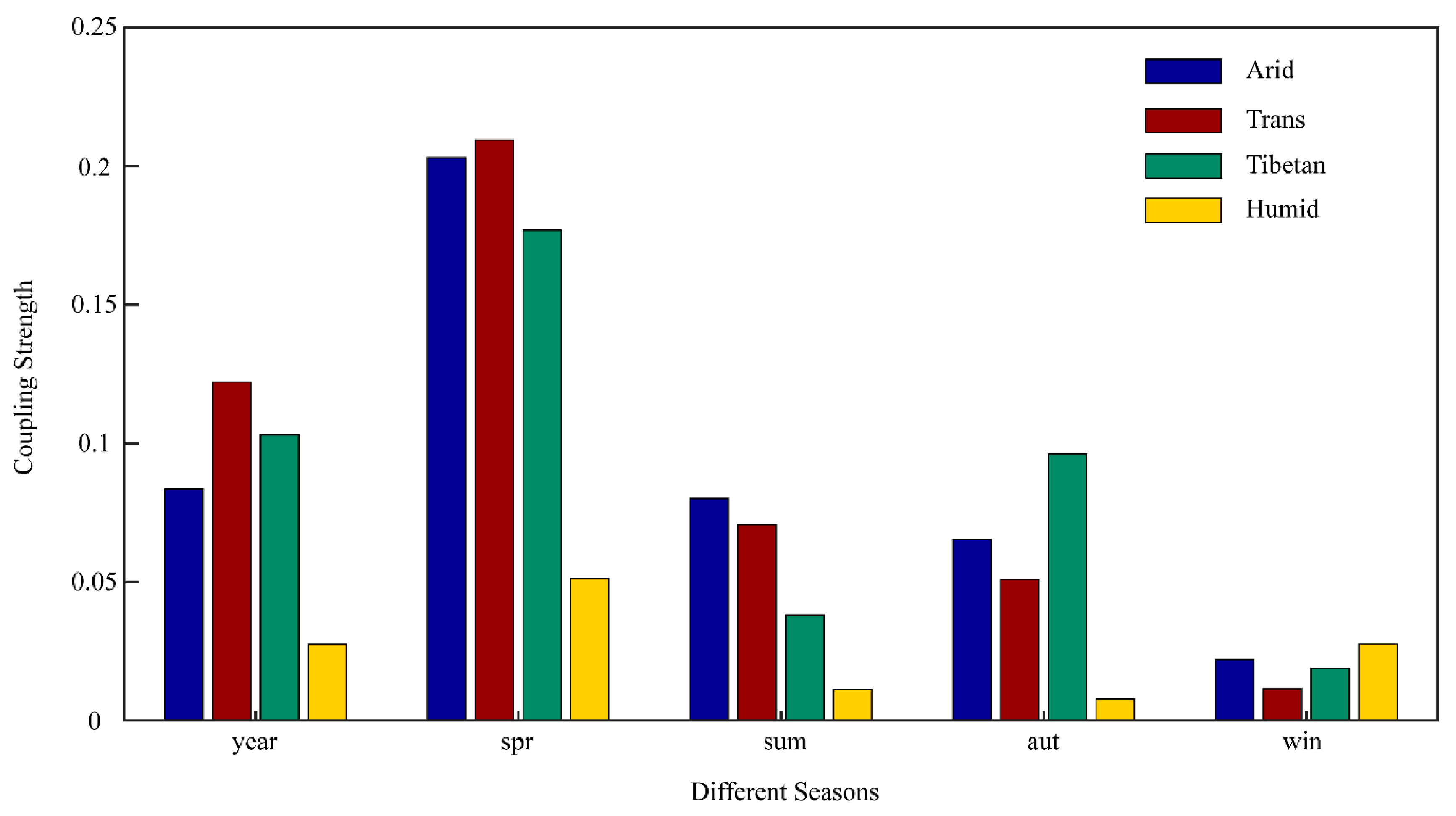 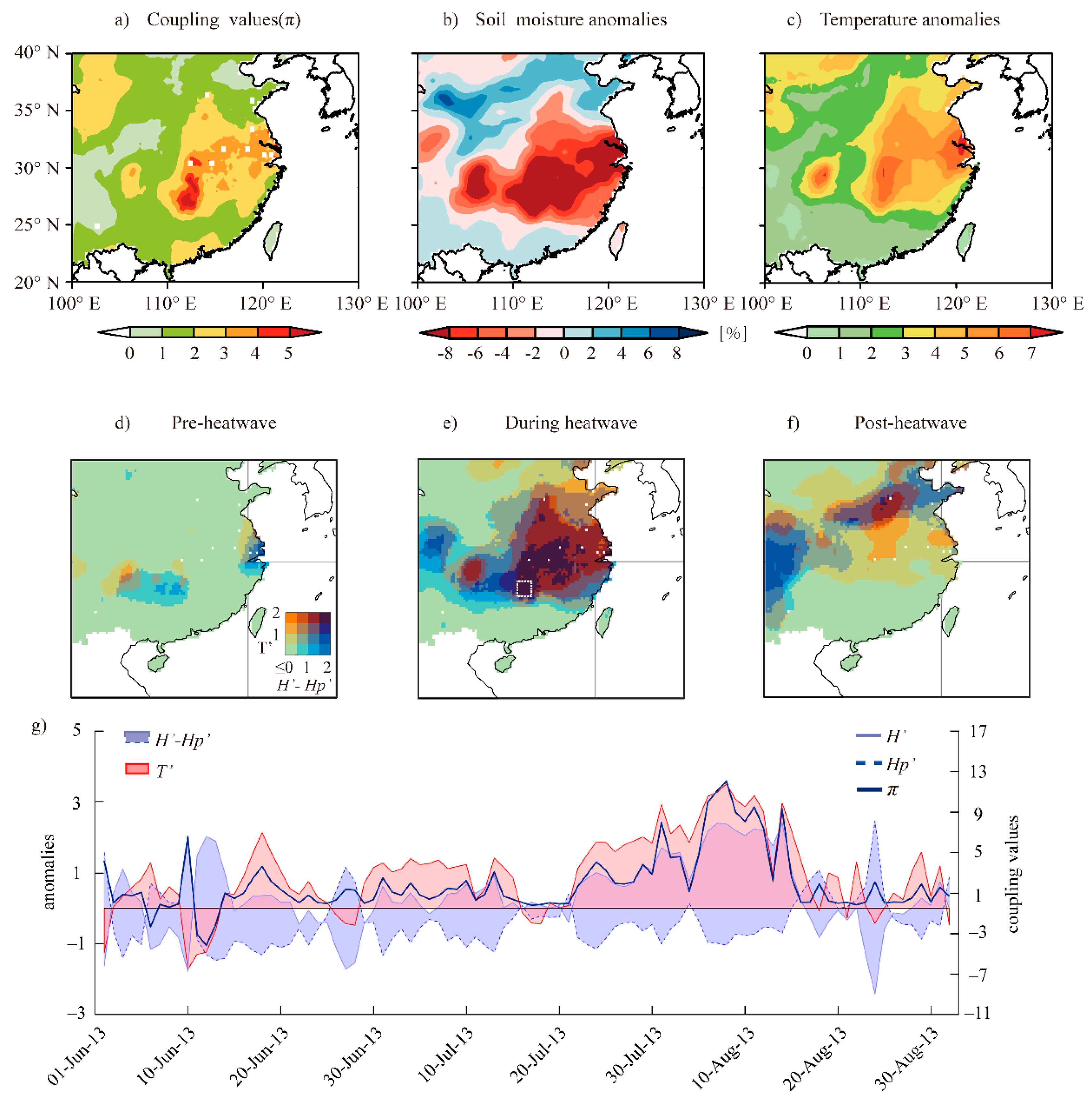 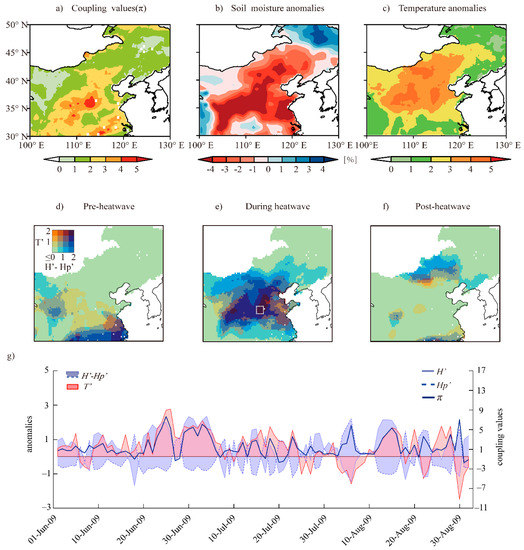