Climate change threatens the hydrological equilibrium with severe consequences for living beings. In that respect, considerable differences in drought features are expected, especially for mountain-Andean regions, which seem to be prone to climate change. Therefore, an urgent need for evaluation of such climate conditions arises; especially the effects at catchment scales, due to its implications over the hydrological services. However, to study future climate impacts at the catchment scale, the use of dynamically downscaled data in developing countries is a luxury due to the computational constraints. This study performed spatiotemporal future long-term projections of droughts in the upper part of the Paute River basin, located in the southern Andes of Ecuador. Using 10 km dynamically downscaled data from four global climate models, the standardized precipitation and evapotranspiration index (SPEI) index was used for drought characterization in the base period (1981–2005) and future period (2011–2070) for RCP 4.5 and RCP 8.5 of CMIP5 project. Fitting a generalized-extreme-value (GEV) distribution, the change ratio of the magnitude, duration, and severity between the future and present was evaluated for return periods 10, 50, and 100 years. The results show that magnitude and duration dramatically decrease in the near future for the climate scenarios under analysis; these features presented a declining effect from the near to the far future. Additionally, the severity shows a general increment with respect to the base period, which is intensified with longer return periods; however, the severity shows a decrement for specific areas in the far future of RCP 4.5 and near future of RCP 8.5. This research adds knowledge to the evaluation of droughts in complex terrain in tropical regions, where the representation of convection is the main limitation of global climate models (GCMs). The results provide useful information for decision-makers supporting mitigating measures in future decades. View Full-Text
Keywords: droughts; climate change; SPEI index; GEV distribution; Andean basin droughts; climate change; SPEI index; GEV distribution; Andean basin
►▼ Show Figures 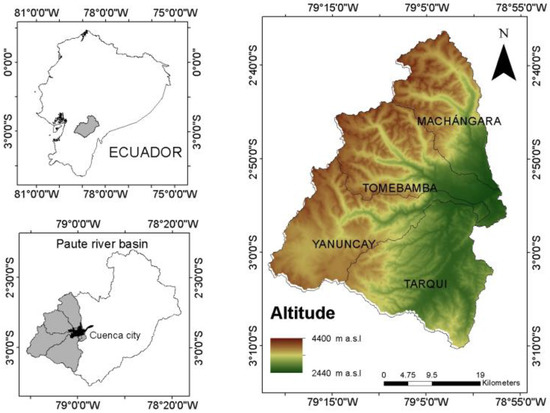