Optical Energy Variability Induced by Speckle: The Cases of MERLIN and CHARM-F IPDA Lidar
Next Article in Special Issue

Use of Low-Cost Ambient Particulate Sensors in Nablus, Palestine with Application to the Assessment of Regional Dust Storms

Few air pollutant studies within the Palestinian territories have been reported in the literature. In March–April and May–June of 2018, three low-cost, locally calibrated particulate monitors (AirU’s) were deployed at different elevations and source areas throughout the city of Nablus in Northern West Bank, Palestine. During each of the three-week periods, high but site-to-site similar particulate matter less than 2.5 µm in aerodynamic diameter (PM2.5) and less than 10 µm (PM10) concentrations were observed. The PM2.5 concentrations at the three sampling locations and during both sampling periods averaged 38.2 ± 3.6 µg/m3, well above the World Health Organization’s (WHO) 24 h guidelines. Likewise, the PM10 concentrations exceeded or were just below the WHO’s 24 h guidelines, averaging 48.5 ± 4.3 µg/m3. During both periods, short episodes were identified in which the particulate levels at all three sites increased substantially (≈2×) above the regional baseline. Air mass back trajectory analyses using U.S. National Oceanic and Atmospheric Administration’s (NOAA) Hybrid Single-Particle Lagrangian Integrated Trajectory (HYSPLIT) model suggested that, during these peak episodes, the arriving air masses spent recent days over desert areas (e.g., the Saharan Desert in North Africa). On days with regionally low PM2.5 concentrations (≈20 µg/m3), back trajectory analysis showed that air masses were directed in from the Mediterranean Sea area. Further, the lower elevation (downtown) site often recorded markedly higher particulate levels than the valley wall sites. This would suggest locally derived particulate sources are significant and may be beneficial in the identification of potential remediation options. View Full-Text
Keywords: particulate matter; dust storms; back trajectory; Palestine particulate matter; dust storms; back trajectory; Palestine
►▼ Show Figures 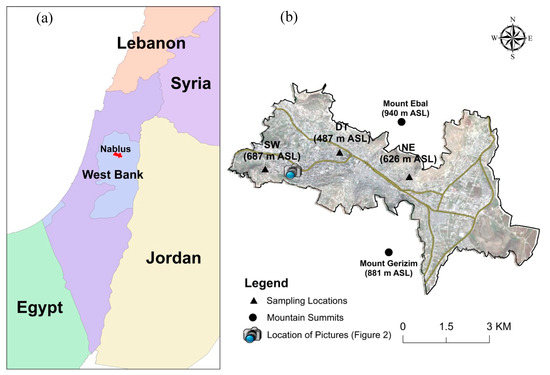