May-to-July and February-to-April represent peak rainy seasons in two sub-regions of Northeast Brazil (NEB): Eastern NEB and Northern NEB respectively. In this paper, we identify key oceanic indexes in the tropical South Atlantic for driving these two rainy seasons. In Eastern NEB, the May-to-July rainfall anomalies present a positive relationship with the previous boreal winter sea surface temperature anomalies (SSTA) in the southeast tropical Atlantic (20°–10° S; 10° W–5° E). This positive relationship, which spread westward along the southern branch of the South Equatorial Current, is associated with northwesterly surface wind anomalies. A warmer sea surface temperature in the southwestern Atlantic warm pool increases the moisture flux convergence, as well as its ascending motion and, hence, the rainfall along the adjacent coastal region. For the Northern NEB, another positive relationship is observed between the February-to-April rainfall anomalies and the SSTA of the previous boreal summer in the Atlantic Niño region (3° S–3° N; 20° W–0°). The negative remote relationship noticeable between the Northern NEB rainfall and the concomitant Pacific Niño/Niña follows cold/warm events occurring during the previous boreal summer in the eastern equatorial Atlantic. The southeastern tropical Atlantic and Atlantic Niño SSTA indexes may, then, be useful to predict seasonal rainfall over the Eastern and Northern NEB, respectively, for about a 6 month leading period. The ability of both southeastern tropical Atlantic and Atlantic Niño SSTA indexes to forecast the Eastern and Northern NEB rainfall, with about a 6 month lead time, is improved when these indexes are respectively combined with the Niño3 (5° S–5° N; 150°–90° W) and the northeast subtropical Atlantic (20° N–35° N, 45° W–20° W), mainly from the 1970’s climate shift. View Full-Text
Keywords: Brazilian Northeast; rainfall; predictability; tropical Atlantic Brazilian Northeast; rainfall; predictability; tropical Atlantic
►▼ Show Figures 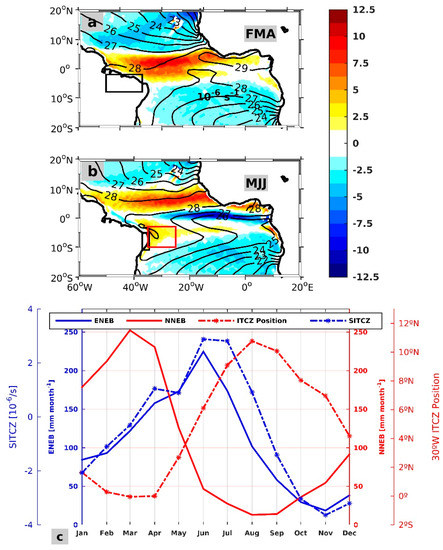