Spatiotemporal Change of Plum Rains in the Yangtze River Delta and Its Relation with EASM, ENSO, and PDO During the Period of 1960–2012
Previous Article in Journal

Countries continuously review and improve their Emergency Preparedness and Response (EP&R) arrangements and capabilities to take agile and rapid actions with the intent of minimizing health, environmental and economic impacts of potential harmful releases into the atmosphere. One of the specific topics within the EP&R field is the estimation of the areas that might be affected. A proposal is presented to estimate the spatial distribution of the released material. The methodology combines the computation of air mass trajectories and the elaboration of density maps from the corresponding end-point positions. To this purpose, density maps are created in a three-way procedure; first, forward trajectories are calculated from a certain location and for a long period of time, e.g., a decade; second, the selected end-point positions are aggregated in a density field by applying the kernel density estimation method, and then the density field is visualized. The final product reports the areas with the longest residence time of air masses, and hence, the areas “most likely” to be affected and where the deposit may be substantial. The usefulness of this method is evaluated taking as reference a ten-year period (2007–2016) and against two different radioactive release scenarios, such as the Chernobyl accident and the Algeciras release. While far from being fully comprehensive, as only meteorological data are used, the performance of this method is reasonably efficient, and hence, it is a desirable alternative to estimating those areas potentially affected by a substantial deposit following the releases of a harmful material in the atmosphere. View Full-Text
Keywords: Nuclear Emergency Preparedness and Response; air mass trajectory; density maps Nuclear Emergency Preparedness and Response; air mass trajectory; density maps
►▼ Show Figures 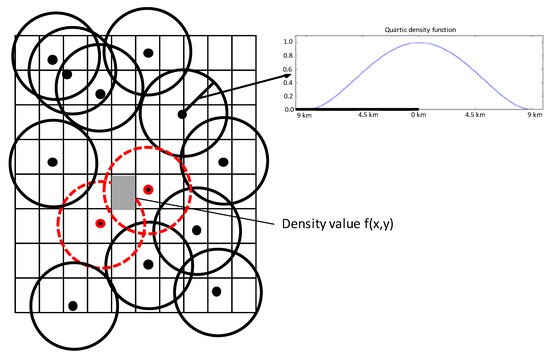 Hernández-Ceballos, M.Á.; De Felice, L. Air Mass Trajectories to Estimate the “Most Likely” Areas to Be Affected by the Release of Hazardous Materials in the Atmosphere—Feasibility Study. Atmosphere 2019, 10, 253.


Hernández-Ceballos MÁ, De Felice L. Air Mass Trajectories to Estimate the “Most Likely” Areas to Be Affected by the Release of Hazardous Materials in the Atmosphere—Feasibility Study. Atmosphere. 2019; 10(5):253.


Hernández-Ceballos, Miguel Á.; De Felice, Luca. 2019. "Air Mass Trajectories to Estimate the “Most Likely” Areas to Be Affected by the Release of Hazardous Materials in the Atmosphere—Feasibility Study." Atmosphere 10, no. 5: 253.