Pre-Earthquake and Coseismic Ionosphere Disturbances of the Mw 6.6 Lushan Earthquake on 20 April 2013 Monitored by CMONOC
Previous Article in Special Issue

Various temporal and spatial changes have manifested in Arctic storm activities, including the occurrence of the anomalously intense storms in the summers of 2012 and 2016, along with the amplified warming and rapidly decreased sea ice. To detect the variability of and changes in storm activity and understand its role in sea ice changes, we examined summer storm count and intensity year-by-year from ensemble hindcast simulations with an Arctic regional coupled climate model for the period of 1948–2008. The results indicated that the model realistically simulated the climatological spatial structure of the storm activity, characterized by the storm count and intensity. The simulated storm count captures the variability derived from the National Centers for Environmental Prediction-National Center for Atmospheric Research (NCEP–NCAR) reanalysis, though the simulated one is higher than that in the reanalysis. This could be attributed to the higher resolution of the model that may better represent smaller and shallower cyclones. The composite analysis shows that intense storms tend to form a low-pressure pattern with centers over the Kara Sea and Chukchi Sea, respectively, generating cyclonic circulation over the North Atlantic and North Pacific Arctic Ocean. The former drives intensification of the transpolar drift and Fram Strait sea ice export, and the latter suppresses thick ice transport from the Canada Basin to the Beaufort–Chukchi Seas, in spite of an increase in sea ice transport to the East Siberian Sea. Associated with these changes in sea ice transport, sea ice concentration and thickness show large decreases in the Barents–Kara Seas and the Chukchi–East-Siberian Seas, respectively. Energy budgets analysis suggests that more numerous intense storms substantially decrease the downward net sea ice heat fluxes, including net radiative fluxes, turbulent fluxes, and oceanic heat fluxes, compared with that when a lower number of intense storms occur. The decrease in the heat fluxes could be attributable to an increased cloudiness and the resultant reduction of downward shortwave radiation, as well as a destabilized boundary layer induced increase in upward turbulent fluxes. View Full-Text
Keywords: Arctic storm/cyclone; sea ice; air–ice–sea interaction; regional modeling Arctic storm/cyclone; sea ice; air–ice–sea interaction; regional modeling
►▼ Show Figures 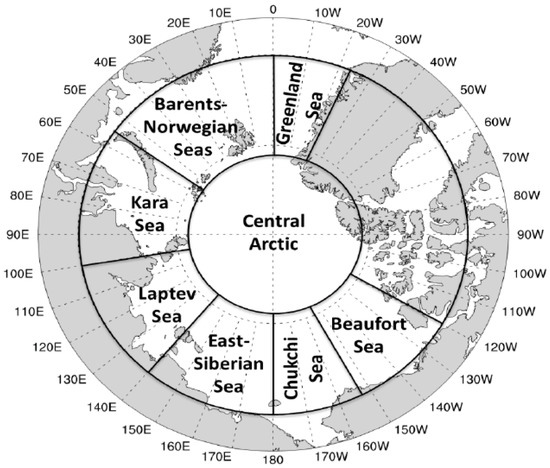