Regional Frequency Analysis of Precipitation Extremes and Its Spatio-Temporal Patterns in the Hanjiang River Basin, China

A two-dimensional mathematical model of moist air convection in the sub-cloud and cloud layers is proposed. A theoretical analysis of the influence of near ground atmospheric parameters on the development of sub-cloud and cloud convection is provided, and the criteria of convection development are considered. As a rule, this relationship is parameterized in general circulation, regional or mesoscale models of the atmosphere. Therefore, achieving a more complete and correct understanding of this relationship can lead to an improvement in the accuracy of weather forecasts. The mathematical model describes the system of the equations of motion, heat conductivity and the continuity equations for a two-dimensional vertical plane. The approximate analytical solution of the system of equations is obtained. Expressions for the estimation of the convection height and height of maximum velocity are derived for vertical and horizontal components of updraft wind and for vertical distribution of temperature. From the expressions obtained, the criterion of sub-cloud convection development is derived. The expressions for the convection parameters at a condensation level have also been formulated, from which the criterion of cloud development through convection is derived. It is established that the development of cloud convection depends on absolute values of the dew point deficit in a near-surface layer and, in a greater degree, on vertical gradients of water vapor mass fraction. It is shown that at certain critical values of a vertical gradient of water vapor mass fraction “explosive convective growth” is observed. The application of the obtained results to artificial stimulation of convection by means of air heating in the near-ground atmosphere has shown that the success of such an application and the required air heating-up depend on: (i) the vertical temperature gradient; (ii) the vertical dew-point gradient; and (iii) the value of the dew point deficit in the near-ground layer. The analysis performed has shown the possibility of successful stimulation of artificial convection under specific favorable atmospheric conditions. View Full-Text
Keywords: atmosphere surface layer; sub-cloud convection; condensation level; cloud convection; two-dimensional model of convection; artificial convection atmosphere surface layer; sub-cloud convection; condensation level; cloud convection; two-dimensional model of convection; artificial convection
►▼ Show Figures 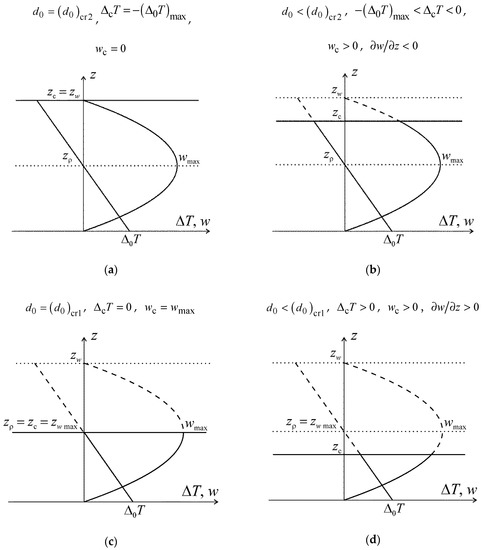