Influence of Maternal Aging on Mitochondrial Heterogeneity, Inheritance, and Function in Oocytes and Preimplantation Embryos

Mitochondrial HTRA2 Plays a Positive, Protective Role in Dictyostelium discoideum but Is Cytotoxic When Overexpressed

HTRA2 is a mitochondrial protein, mutations in which are associated with autosomal dominant late-onset Parkinson’s disease (PD). The mechanisms by which HTRA2 mutations result in PD are poorly understood. HTRA2 is proposed to play a proteolytic role in protein quality control and homeostasis in the mitochondrial intermembrane space. Its loss has been reported to result in accumulation of unfolded and misfolded proteins. However, in at least one case, PD-associated HTRA2 mutation can cause its hyperphosphorylation, possibly resulting in protease hyperactivity. The consequences of overactive mitochondrial HTRA2 are not clear. Dictyostelium discoideum provides a well-established model for studying mitochondrial dysfunction, such as has been implicated in the pathology of PD. We identified a single homologue of human HTRA2 encoded in the Dictyostelium discoideum genome and showed that it is localized to the mitochondria where it plays a cytoprotective role. Knockdown of HTRA2 expression caused defective morphogenesis in the multicellular phases of the Dictyostelium life cycle. In vegetative cells, it did not impair mitochondrial respiration but nonetheless caused slow growth (particularly when the cells were utilizing a bacterial food source), unaccompanied by significant defects in the requisite endocytic pathways. Despite its protective roles, we could not ectopically overexpress wild type HTRA2, suggesting that mitochondrial HTRA2 hyperactivity is lethal. This toxicity was abolished by replacing the essential catalytic serine S300 with alanine to ablate serine protease activity. Overexpression of protease-dead HTRA2 phenocopied the effects of knockdown, suggesting that the mutant protein competitively inhibits interactions between wild type HTRA2 and its binding partners. Our results show that cytopathological dysfunction can be caused either by too little or too much HTRA2 activity in the mitochondria and suggest that either could be a cause of PD. View Full-Text
Keywords: HTRA2; Parkinson’s disease; Dictyostelium; endocytosis; growth; mitochondria; phototaxis HTRA2; Parkinson’s disease; Dictyostelium; endocytosis; growth; mitochondria; phototaxis
►▼ Show Figures 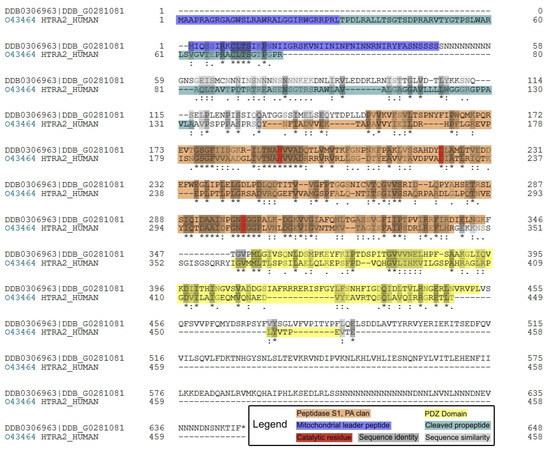