LTBSG1, a New Allele of BRD2, Regulates Panicle and Grain Development in Rice by Brassinosteroid Biosynthetic Pathway
Next Article in Special Issue

What Does the Future Hold for Yellow Fever Virus? (II)
Previous Article in Journal

What Does the Future Hold for Yellow Fever Virus? (I)

The recent resurgence of yellow fever virus (YFV) activity in the tropical regions of Africa and South America has sparked renewed interest in this infamous arboviral disease. Yellow fever virus had been a human plague for centuries prior to the identification of its urban transmission vector, the Aedes (Stegomyia) aegypti (Linnaeus) mosquito species, and the development of an efficient live-attenuated vaccine, the YF-17D strain. The combination of vector-control measures and vaccination campaigns drastically reduced YFV incidence in humans on many occasions, but the virus never ceased to circulate in the forest, through its sylvatic invertebrate vector(s) and vertebrate host(s). Outbreaks recently reported in Central Africa (2015–2016) and Brazil (since late 2016), reached considerable proportions in terms of spatial distribution and total numbers of cases, with multiple exports, including to China. In turn, questions about the likeliness of occurrence of large urban YFV outbreaks in the Americas or of a successful import of YFV to Asia are currently resurfacing. This two-part review describes the current state of knowledge and gaps regarding the molecular biology and transmission dynamics of YFV, along with an overview of the tools that can be used to manage the disease at individual, local and global levels. View Full-Text
Keywords: yellow fever virus; flavivirus; vector-borne transmission; emergence yellow fever virus; flavivirus; vector-borne transmission; emergence
►▼ Show Figures 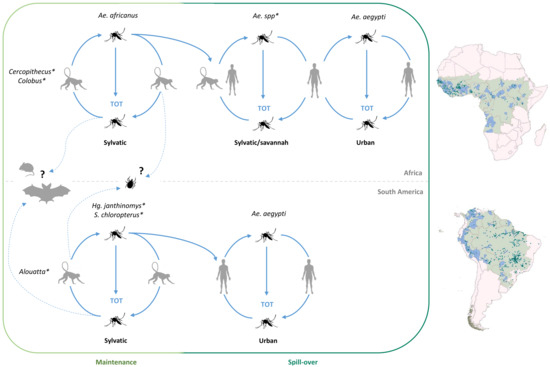