Genetic Diversity within Snap Beans and Their Relation to Dry Beans

The domestication and subsequent genetic improvement of wheat led to the development of large-seeded cultivated wheat species relative to their smaller-seeded wild progenitors. While increased grain weight (GW) continues to be an important goal of many wheat breeding programs, few genes underlying this trait have been identified despite an abundance of studies reporting quantitative trait loci (QTL) for GW. Here we perform a QTL analysis for GW using a population of recombinant inbred lines (RILs) derived from the cross between wild emmer wheat accession ‘Zavitan’ and durum wheat variety ‘Svevo’. Identified QTLs in this population were anchored to the recent Zavitan reference genome, along with previously published QTLs for GW in tetraploid wheat. This genome-based, meta-QTL analysis enabled the identification of a locus on chromosome 6A whose introgression from wild wheat positively affects GW. The locus was validated using an introgression line carrying the 6A GW QTL region from Zavitan in a Svevo background, resulting in >8% increase in GW compared to Svevo. Using the reference sequence for the 6A QTL region, we identified a wheat ortholog to OsGRF4, a rice gene previously associated with GW. The coding sequence of this gene (TtGRF4-A) contains four single nucleotide polymorphisms (SNPs) between Zavitan and Svevo, one of which reveals the Zavitan allele to be rare in a core collection of wild emmer and completely absent from the domesticated emmer genepool. Similarly, another wild emmer accession (G18-16) was found to carry a rare allele of TtGRF4-A that also positively affects GW and is characterized by a unique SNP absent from the entire core collection. These results exemplify the rich genetic diversity of wild wheat, posit TtGRF4-A as a candidate gene underlying the 6A GW QTL, and suggest that the natural Zavitan and G18-16 alleles of TtGRF4-A have potential to increase wheat yields in breeding programs. View Full-Text
Keywords: Quantitative trait loci; wild emmer wheat; GRF4; meta-QTL; grain weight; thousand kernel weight; Single nucleotide polymorphism Quantitative trait loci; wild emmer wheat; GRF4; meta-QTL; grain weight; thousand kernel weight; Single nucleotide polymorphism
►▼ Show Figures 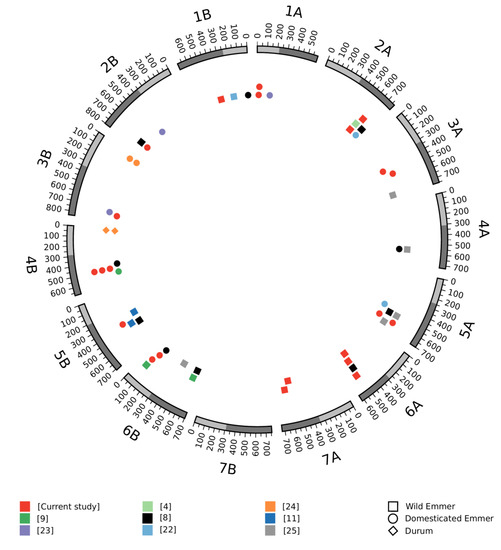