enChIP-Seq Analyzer: A Software Program to Analyze and Interpret enChIP-Seq Data for the Detection of Physical Interactions between Genomic Regions

The dynamics of the three-dimensional structure of the genome play a critical role in the regulation of genome functions such as transcription, epigenetic regulation, genomic imprinting, and X-chromosome inactivation [1,2]. Methods to detect physical interactions between genomic regions have been developed in the last two decades. Chromosome conformation capture (3C) was the first biochemical method widely used to detect physical interactions between genomic regions [3]. Various derivatives of 3C have been developed [4]. 3C and its derivatives depend on cross-linking, fragmentation of chromatin by enzymatic digestion or other methods, and ligation of proximal DNA ends. The ligation step can be a source of artifactual “interactions”, leading to occasional discrepancies relative to results derived from other methods, such as imaging analysis [5,6]. Therefore, several “ligation-free” biochemical methods were developed to detect physical interactions between genomic regions. Genome architecture mapping (GAM) is a method to measure the statistical proximities of genomic regions by sequencing the DNA extracted from ultra-thin cryosectioned nuclear slices [7]. Split-pool recognition of interactions by tag extension (SPRITE) is a method that involves performing repeated rounds of splitting and barcoding of individual chromatin complexes followed by identification of the interacting genomic regions by matching the barcodes [8]. Chromatin interaction analysis via droplet-based and barcode-linked sequencing (ChIA-Drop) tracks amplicons arising from gel-bead-in-emulsion (GEM) droplets of each chromatin complex by barcode sequencing [9].
We recently developed a method to search for genomic regions interacting with a locus of interest in a non-biased manner that combines pull-down of the locus using engineered DNA-binding molecule-mediated chromatin immunoprecipitation (enChIP) and next-generation sequencing (NGS) analysis (enChIP-Seq). The CRISPR system, consisting of a nuclease-dead form of Cas9 (dCas9) and a guide RNA (gRNA), or transcription activator-like (TAL) proteins, can be used for enChIP. In enChIP-Seq, it is necessary to compare multiple datasets of enChIP-Seq data to unambiguously detect specific interactions. However, it is not always easy to analyze enChIP-Seq datasets to subtract non-specific interactions or identify common interactions. To facilitate such analysis, we developed the enChIP-Seq analyzer software. It enables easy extraction of common signals as well as subtraction of non-specific signals observed in negative control samples, thereby streamlining extraction of specific enChIP-Seq signals. enChIP-Seq analyzer will help users analyze enChIP-Seq data and identify physical interactions between genomic regions.

enChIP-Seq analyzer is provided as free software at GitHub (https://github.com/TKY-SE/enChIP-Seq-Analyzer, accessed on 1 December 2021). All the program was executed on a computer with Intel® Core™ i5-7500 CPU @ 3.40 GHz 3.41 GHz, and 8 GB of RAM. Preparation of data sets, mode of analysis, and system handling for enChIP-Seq analyzer are shown in a step-by-step manner below.

2.3. Filtering of the NGS Peaks to Identify Genomic Regions Interacting with a Target Locus

enChIP-Seq analyzer is a software program that enables easy consolidation of enChIP-Seq data, including extraction of common peaks observed for different gRNAs bound to the target genomic region and subtraction of peaks in negative control samples (Figure 1).

2.4. Preparation of the Data Set

2.6. Handling of the System

enChIP-Seq analyzer, a Java-based software program, is designed for use with Microsoft Windows 10. The software can be downloaded from GitHub (https://github.com/TKY-SE/enChIP-Seq-Analyzer, accessed on 1 December 2021). The browser for the software is shown in Figure 4A. The detailed procedures are outlined below.

(1-1) Add tab files that include enChIP-specific NGS peaks in the field “I”. To this end, click on “add” to open a selection window and select a tab file from your computer. Repeat this step to add additional tab files.
(1-2) (If necessary) To remove an added file, select a file(s) and click on “remove”.
(1-3) (Mandatory) Select an added file as a base file, which is then highlighted.
(1-4) To execute the program, click on “view”.
(1-5) The result is shown in “V”, which is based on information from the base file. The number of common peaks is shown in “VI” as “count”. An example is shown in Figure 4B.

(2-1) Perform steps (1-1) through (1-3). For this analysis, use of only one tab file is also acceptable.
(2-2) Add a tab file(s) that includes NGS peaks with negative peak information (e.g., NGS peaks from enChIP experiments performed without a gRNA) in the field “II”. To this end, click on “add” to open a selection window and select a tab file(s) from your computer. Repeat this step to add two or more tab files.
(2-3) (If necessary) To remove an added file, select a file(s) and click on “remove” in “II”.
(2-4) (Mandatory) Select an added file in “I” as a base file, which is then highlighted.
(2-5) To execute the program, click on “Pros.-Neg. (IV)”.
(2-6) The result is shown in “V”, which is based on the information from the base file. The number of peaks remaining after elimination of negative peak information is shown in “VI” as “count”. An example is shown in Figure 4C.
(2-7) (If necessary) If tag number and/or fold enrichment are necessary criteria for filtering, set tag number and/or fold enrichment criteria in “III”. The following symbols can be used for filtering: ≥, =, and ≤.

Data shown in “V” can be exported as a csv file and easily utilized by other software/web tools. To this end, click on “Export Table (VII)”. Select a folder to save the file from the opened window.

2.6.4. View Information within a Tab File

We previously identified genomic regions associated with the 5′HS5 locus on a genome-wide scale in K562 cells under undifferentiated or sodium butyrate (NaB)-mediated differentiated conditions [10]. In that study, we performed enChIP using gRNAs #6 and #17, which targeted the 5′HS5 locus and used the purified DNA for NGS analysis. As a negative control, we also performed enChIP in the absence of a gRNA and used the purified DNA for NGS analysis. Next, we compared the NGS peaks from each enChIP experiment to those for input DNA and used MACS analysis to extract the list of enriched peaks (“enChIP #6 peaks”, “enChIP #17 peaks”, and “Off-target sites”) (Data sets in Figure 5A). Using enChIP-Seq analyzer, we compared the lists of extracted peaks in a step-by-step manner as follows (Figure 5A).

The software is available at: https://github.com/TKY-SE/enChIP-Seq-Analyzer, accessed on 1 December 2021. The data is publicly available and described at our previous paper [10].

T.F. and H.F. are inventors of granted patents and a patent pending that are owned by Osaka University for the technology of purification and subsequent analysis of specific types of DNA, including genomic DNA with chromatin structure, using an engineered DNA-binding molecule, including the CRISPR complex binding to the target DNA (patent name: “Method for isolating specific genomic regions using molecule binding specifically to endogenous DNA sequence”. Patent numbers: Japan 5,954,808 and EP 2,963,113. Patent application number: WO2014/125668). T.F. and H.F. are co-founders of Epigeneron, Inc. and own stock in the company. H.F. is one of the directors of Epigeneron, Inc. A.S. and T.N. are employees of Tohoku Chemical Co. Ltd. Tohoku Chemical Co. Ltd. played no role in this study. 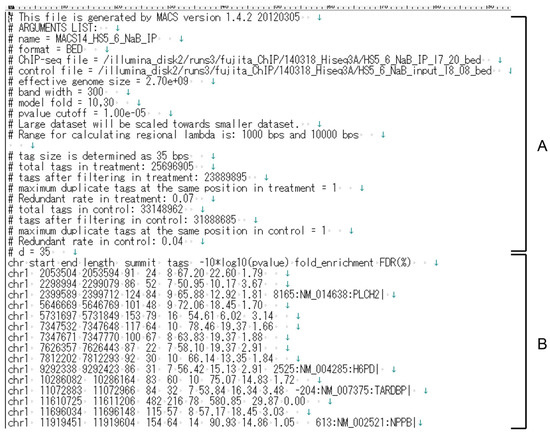