Large-Scale Cloning and Comparative Analysis of TaNAC Genes in Response to Stripe Rust and Powdery Mildew in Wheat (Triticum aestivum L.)
Next Article in Special Issue

Background: Engineering apomixis in sexually reproducing plants has been long desired because of the potential to fix hybrid vigor. Validating the functionality of genes originated from apomictic species that contribute to apomixis upon transfer to sexually reproducing species is an important step. The PsASGR-BABYBOOM-like (PsASGR-BBML) gene from Pennisetum squamulatum confers parthenogenesis in this apomict, and its functionality was demonstrated in several sexually reproducing monocots but not in any dicots. Methods: We introduced the PsASGR-BBML gene regulated by egg cell-specific promoters, either AtDD45 or AtRKD2, into tobacco, and analyzed progeny of the transgenic lines resulting from self-pollination and crossing by flow cytometry. Results: We identified haploid progeny at a frequency lower than 1% in the AtDD45pro lines, while at a frequency of 9.3% for an octoploid (2n = 8x) AtRKD2pro line. Haploid production in the T2 generation, derived from the tetraploid T1 offspring of this original octoploid AtRKD2pro line, was also observed. Pollinated by homozygous transgenic tobacco carrying a DsRed marker gene, 4x progeny of the AtRKD2pro line yielded parthenogenetic embryos identified as DsRed negative. We verified that the DsRed negative seedlings recovered were haploid (2x). Conclusion: The PsASGR-BBML gene regulated by egg cell-specific promoters could enable parthenogenesis in tobacco, a dicotyledon species. View Full-Text
Keywords: apomixis; parthenogenesis; haploid progeny; dicotyledon; PsASGR-BBML; pseudogamy apomixis; parthenogenesis; haploid progeny; dicotyledon; PsASGR-BBML; pseudogamy
►▼ Show Figures 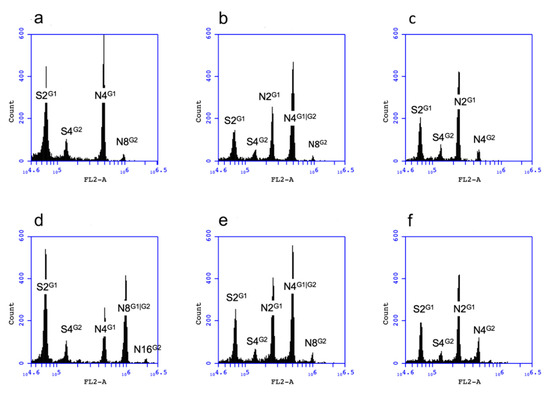