The NAM, ATAF1/2, and CUC2 (NAC) transcription factors (TFs) constitute the largest plant-specific TF superfamily, and play important roles in various physiological processes, including stress responses. Stripe rust and powdery mildew are the most damaging of the fungal diseases that afflict wheat (Triticum aestivum L.). However, studies on Triticum aestivum NAC (TaNAC)s’ role in resistance to the two diseases are still limited, especially in an overall comparative analysis of TaNACs responding or not to fungal stress. In the present study, 186 TaNAC transcripts were obtained from the resistant hexaploid wheat line N9134 under fungal stress, and 180 new transcripts were submitted to GenBank. Statistical results show that 35.1% (54/154) of TaNAC genes responded to stripe rust and powdery mildew in the seedling stage. “Abnormal” coding transcripts of differentially expressed (DE)-TaNAC genes in wheat responding to fungal stress were found in a significantly higher proportion (24/117 vs. 8/69, p = 0.0098) than in non-DE-NACs. This hinted that the alternative splicing of TaNAC genes was active in transcriptional or post-transcriptional regulation during plant-pathogen interactions. Full-length NAC proteins were classified into nine groups via phylogenetic analysis. Multiple-sequence alignment revealed diversity in the C-terminal structural organization, but the differentially expressed gene (DEG)-encoding proteins enriched in Subgroups VI and VII were conserved, with WV[L/V]CR amino acid residues in Motif 7 following the NAM domain. Our data that showed TaNAC TFs responded to fungal disease, which was affected by expression levels and by the regulation of multifarious transcript variants. These data for TaNAC responses to stripe rust and/or powdery mildew and their numerous structural variants provide a good resource for NAC function–mechanism analysis in the context of biotic-stress tolerance in wheat. View Full-Text
Keywords: TaNAC; wheat; stripe rust; powdery mildew; cloning; comparative analysis; alternative splicing; structural variants TaNAC; wheat; stripe rust; powdery mildew; cloning; comparative analysis; alternative splicing; structural variants
►▼ Show Figures 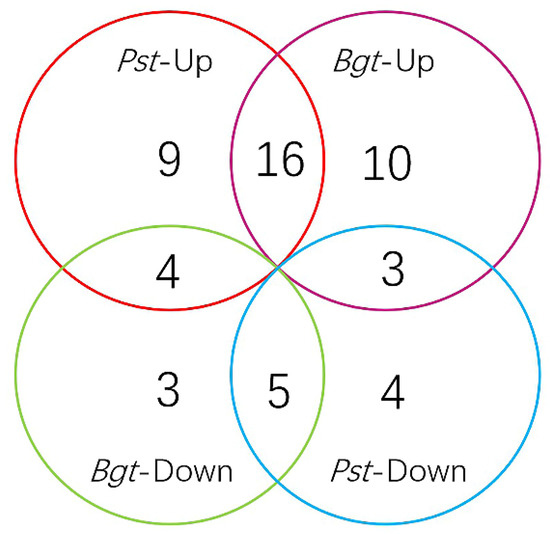