Comparative Proteomics Analysis of Anisakis simplex s.s.—Evaluation of the Response of Invasive Larvae to Ivermectin
Previous Article in Journal

Anisakiasis is nowadays a well-known infection, mainly caused by the accidental ingestion of Anisakis larvae, following the consumption of raw or undercooked fishes and cephalopods. Due to the similarity of symptoms with those of common gastrointestinal disorders, this infection is often underestimated, and the need for new specific diagnostic tools is becoming crucial. Given the remarkable impact that MALDI–TOF MS biotyping had in the last decade in clinical routine practice for the recognition of bacterial and fungi strains, a similar scenario could be foreseen for the identification of parasites, such as nematodes. In this work, a MALDI–TOF MS profiling of Anisakis proteome was pursued with a view to constructing a first spectral library for the diagnosis of Anisakis infections. At the same time, a shotgun proteomics approach by LC–ESI–MS/MS was performed on the two main fractions obtained from protein extraction, to evaluate the protein species enriched by the protocol. A set of MALDI–TOF MS signals associated with proteins originating in the ribosomal fraction of the nematode extract was selected as a potential diagnostic tool for the identification of Anisakis spp. View Full-Text
Keywords: anisakiasis; Anisakis spp.; proteomics; MALDI–TOF MS; LC–ESI–MS/MS anisakiasis; Anisakis spp.; proteomics; MALDI–TOF MS; LC–ESI–MS/MS
►▼ Show Figures 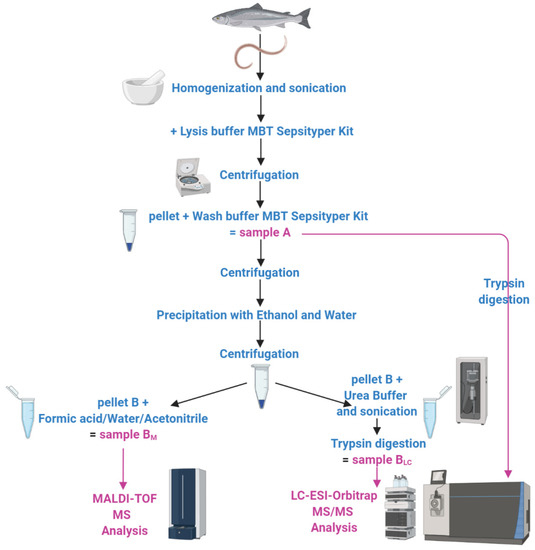