Do Genes Associated with Dyslexia of Chinese Characters Evolve Neutrally?
Next Article in Special Issue

Telomeres are regions of repetitive DNA motifs and associated proteins localized at the edges of chromosomes. They play a crucial role in maintaining the chromosome structure as a single unit, preventing fusions of free “sticky” chromosome ends, or degeneration and loss of genetic information during the replication events [1]. In vertebrates, telomeric regions consist of long tandem repeats of the TTAGGG motif, which was first characterized in humans [2] and seems to be extremely conserved across all studied vertebrates [3]. Telomeres are formed and preserved by telomerase, a reverse transcriptase able to add new TTAGGG repeats based on an RNA template and to compensate for the normal shortening of telomeres after each replication event [4,5,6,7]. However, the presence and, therefore, activity of telomerase varies across cell types and developmental stages [8]. Notably, the shortening of the telomeres is associated with cell aging and cell death [9,10,11,12]. Interestingly, (TTAGGG)n motifs can be found also in non-terminal positions of the chromosomes [3,13,14] in the form of interstitial telomeric repeats (ITRs) also referred to as interstitial telomeric sequences (ITSs). Some authors classified ITRs into two main groups: the short ITRs (s-ITRs) and the heterochromatic ITRs (Het-ITRs) [15]. Other authors report a more detailed classification including s-ITRs, subtelomeric ITRs, fusion ITRs and pericentromeric ITRs [14,15,16,17,18]. s-ITRs are characterized by a low copy number of (TTAGGG)n tandem repeats, located in interstitial positions of the chromosomes. The bloom of genome sequencing projects revealed that s-ITRs are common in vertebrate genomes [19,20,21,22,23,24,25,26]. They are often not detectable by molecular cytogenetic methods, for example by fluorescence in situ hybridization (FISH), due to the low number of repeats [15]. In contrast, Het-ITRs consist of an extensive accumulation of (TTAGGG)n tandem repeats mainly located in heterochromatic regions, particularly in centromeric and pericentromeric areas, but occasionally also interspersed within chromosome arms. Het-ITRs are less common than s-ITRs in vertebrate genomes and are often detectable by molecular cytogenetic methods [15,27,28,29,30]. In our study, we classify ITRs into three categories: centromeric, pericentromeric and intermediate ITRs, according to their position following our previous classification for squamate reptiles [28].
The origin and function of ITRs still remain unclear. According to the most prevalent hypothesis, ITRs are remnants of former terminal telomeric sequences that have been repositioned to interstitial position as a consequence of chromosomal fusions [3], fissions and inversions. Especially Het-ITRs are linked to chromosomal rearrangements [15], and their presence in centromeric and pericentromeric regions are often taken as a marker of former chromosomal fusions [22,31,32]. Alternatively, ITRs can emerge in hotspots for DNA breakage and recombination [14,17], produced by the cell repair machinery after unequal crossing over and double-strand breaks [33,34,35,36]. This last hypothesis explains the origin of s-ITRs, and it is supported by the observation that telomerase is able to insert telomeric repeats into double strand break sites during chromosome healing [37,38]. Notably, long regions of ITRs can also emerge via amplification of pre-existing short (TTAGGG)n repeats present in the genomes as latent telomeres [3].
Cytogenetic studies have detected ITRs in numerous species across vertebrate lineages, including mammals, fishes, birds, non-avian reptiles and amphibians [3,27,28,29,30,39,40,41,42,43,44,45,46]. In non-avian reptiles, distribution of telomeric sequences have been extensively studied in squamates, i.e., lizards and snakes, where ITRs were detected in approximately 100 species, despite the generally conserved chromosome morphology in this group [28,45,47,48,49,50,51,52,53,54,55,56,57,58,59,60,61,62,63,64]. It was proposed that intrachromosomal rearrangements might have a crucial role in the formation of ITRs in squamate reptiles [28,63]. A telomere-only pattern was instead reported in Crocodylus siamensis [65], and as far as we know, no other representative of Crocodylia has been studied. In birds, ITRs are relatively common and mostly found in centromeric and pericentromeric positions [39,44,66,67]. Notably, in some cases, the telomeric motif TTAGGG is part of a larger satellite DNA sequence, and its presence and amplification in the genome is not directly connected to chromosomal rearrangements [68,69]. In turtles, the distribution of telomeric motifs have been studied up to our knowledge in 27 out of the 353 extant species [70,71], but ITRs have been previously reported in only six species [72,73,74,75,76,77,78,79,80,81,82], reviewed further in this study, but more systematic survey is needed before drawing solid conclusions on the frequency of ITRs in turtles.
Turtles have diploid chromosome numbers ranging from 2n = 26 to 2n = 68 [76,83]; however, diploid numbers and chromosome morphology seem to be conserved and rather stable among species within a family [76,84,85]. Phylogenetic reconstruction suggested that the ancestral turtle karyotype was composed of 2n = 52 chromosomes [76]. The variability in chromosome numbers across turtles is driven mainly by fusions involving microchromosomes leading to reduction of diploid chromosome numbers (e.g., in the ancestor of the families Pelomedusidae and Podocnemididae), and by chromosome fissions leading to increase of diploid chromosome numbers (e.g., in the ancestor of the families Carettochelyidae and Trionychidae) [76].
In this study, we explored the distribution of telomeric repeats from representative species across the turtle phylogeny by analyzing 30 species from nine families using fluorescence in situ hybridization with a probe specific for the telomeric repeats. We combine our results with previously published data, and present an overview of the distribution of ITRs across turtles and compare their frequency to other reptile lineages.

We studied the distribution of telomeric (TTAGGG)n repeats in the karyotypes of 30 turtle species representing nine families (Table 1). Blood samples were collected from captive-bred or legally imported turtles from the Münster Zoo (Germany), Plzeň Zoo, Prague Zoo (both Czech Republic), the Museum of Zoology, Senckenberg Dresden (Germany), Turtle Island (Austria) and private keepers. Experiments with animals were performed by accredited researchers (LK: CZ02535, MR: CZ03540). When needed, turtles were temporarily kept in the animal facility of the Faculty of Science, Charles University (accreditation No. 37428/2019-MZE-18134). The species identity of studied turtles was verified in morphologically challenging taxa using mtDNA sequences that were compared to the sequences published in the revisionary works by Fritz et al. [86] for the genus Cyclemys, Petzold et al. [87] for Pelomedusa, and Ihlow et al. [88] for Malayemys. The Galápagos giant tortoises used in the present study from the Prague Zoo are of known provenance and species identity. All experimental procedures were carried out under the supervision and with the approval of the Ethics Committee of the Faculty of Science, Charles University, approved by the Committee for Animal Welfare of the Ministry of Agriculture of the Czech Republic (permit No. MSMT-34426/2019-7).

2.4. Fluorescence In Situ Hybridization with Probes for Telomeric Repeats

The (TTAGGG)n probe for telomeric sequences was prepared and labelled with dUTP-biotin by PCR, using the (TTAGGG)5 and (CCCTAA)5 primers, without DNA template following the protocol of Ijdo et al. [89] and Rovatsos et al. [27]. The probe was diluted in a hybridization buffer (50% formamide in 2 × SSC, pH 7) and stored in the freezer for further use.
The slides with chromosome spreads were aged either overnight at 37 °C or for 1 h at 60 °C. The FISH experiment was conducted in two days. During the first day, the chromosome spreads were treated with RNase (100 μg/mL) for 1 h at 37 °C, 0.01% pepsin for 10 min at 37 °C, post-fixed in 1% formaldehyde solution for 10 min and dehydrated in a 70–85–95% ethanol series. Once dried, the slides were denatured in 70% formamide for 4 min at 75 °C and dehydrated once more with the ethanol series. Meanwhile, the probe was denatured for 6 min at 73 °C and kept in ice for at least 10 min. To each slide, 10 μL of probe was added, covered with a coverslide and incubated overnight at 37 °C. During the second day, the slides were washed 3 times with 50% formamide/2 × SSC solution for 5 min at 37 °C, two times with 2 × SSC for 5 min and once with 4 × SSC/0.05% Tween 20 (Sigma-Aldrich, St. Louis, MO, USA) for 5 min. The slides were incubated in 4 × SSC/5% blocking reagent (Roche) for 45 min at 37 °C and then in 4 × SSC/5% blocking reagent containing avidin-FITC (Vector laboratories, Burlingame, CA, USA) for 30 min at 37 °C. The fluorescence signal was twice amplified by the fluorescein–avidin D/biotinylated anti-avidin system (Vector Laboratories, Burlingame, CA, USA). After this treatment, the slides were dehydrated in ethanol series, air-dried and stained with Fluoroshield with DAPI (Sigma-Aldrich, St. Louis, MO, USA).
For each specimen, at least 20 images were obtained using a Provis AX70 (Olympus, Tokyo, Japan) fluorescence microscope equipped with a DP30BW digital camera (Olympus, Tokyo, Japan). The pictures were obtained in BW and later superimposed in color with DP Manager imaging software (Olympus, Tokyo, Japan).

2.5. Distribution of ITRs across the Turtle Phylogeny

Data for the topology on the karyotype of telomeric sequences from the species studied here was supplemented by previously published records in order to reconstruct the phylogenetic history of the presence/absence of ITRs in turtles (Figure 1). The phylogenetic trees by Pereira et al. [90] and Kehlmaier et al. [91] were used for this phylogenetic reconstruction in the software Mesquite v3.61 [92].

3.3. Distribution of ITRs across the Turtle Phylogeny

Pooling together our results with data from previous studies, ITRs were identified in 10 out of 55 examined turtle species. The phylogenetic pattern of the topology of TTAGGG motifs across turtle genomes suggested that ITRs evolved independently at least seven times (Figure 1).

L.C. and S.M. performed the cytogenetic analyses and prepared the figures; E.P.B., B.A., L.K. and M.R. contributed to the experimental part; T.P., P.P., M.A., P.V., P.W. and U.F. provided part of the material and useful consultations; M.R. conceived and led the project; L.C., S.M., U.F., L.K. and M.R. drafted the first version of the manuscript. All authors edited and approved the final manuscript.

We would like to express our gratitude to Tomáš Jirásek (Zoo Plzeň) for providing material for the study, Petr Ráb and members of his laboratory for their support, Jana Thomayerová and Nuria Viñuela Rodríguez for technical support. 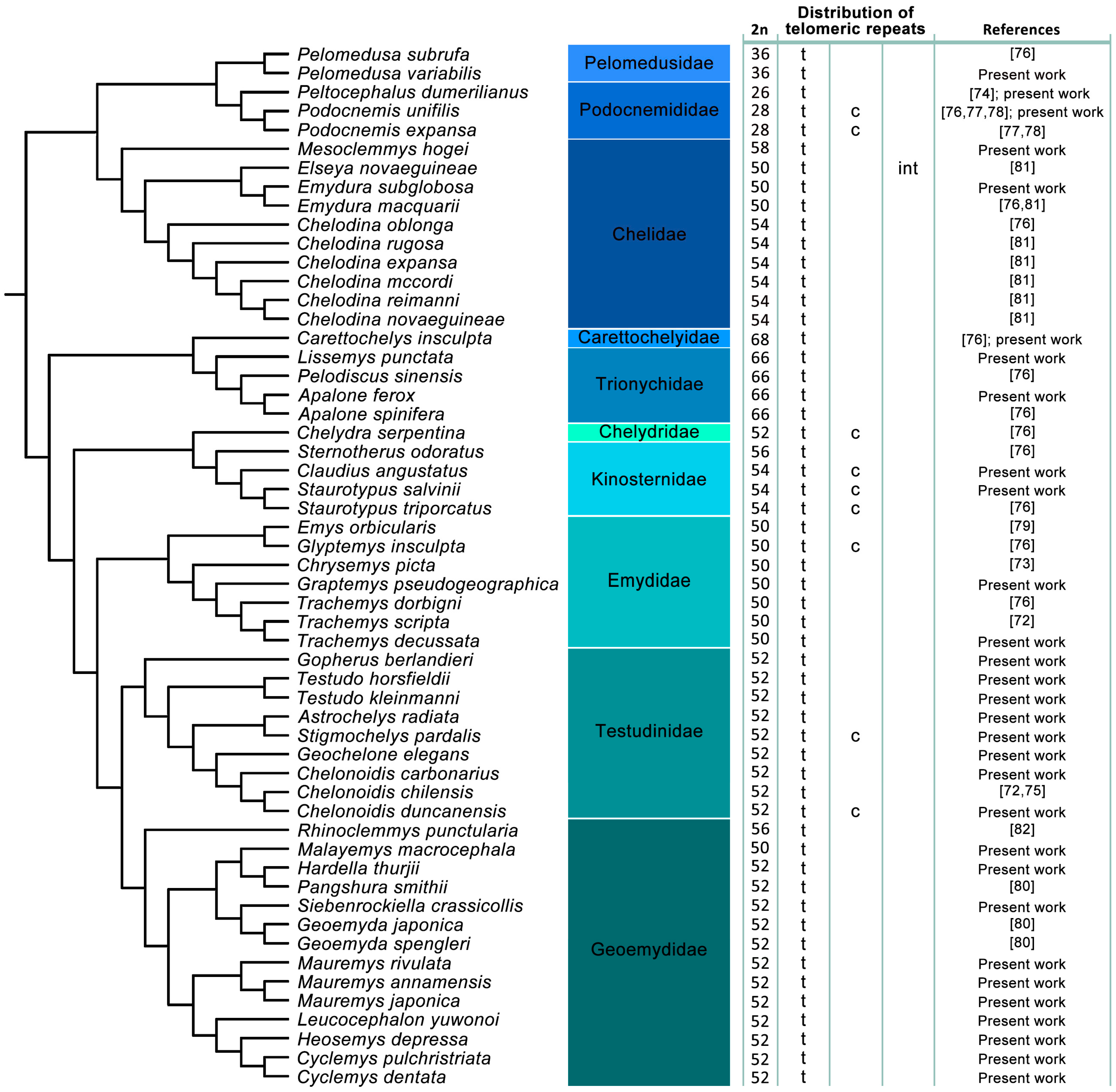 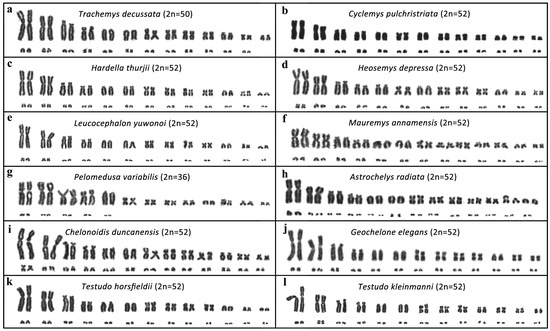 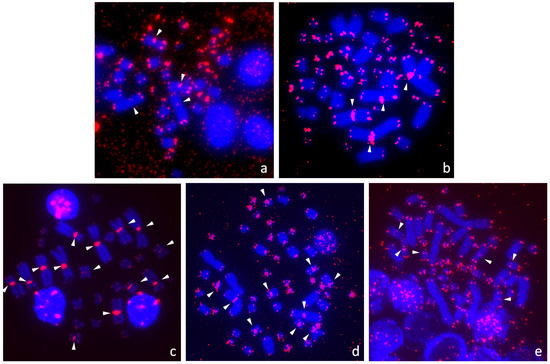 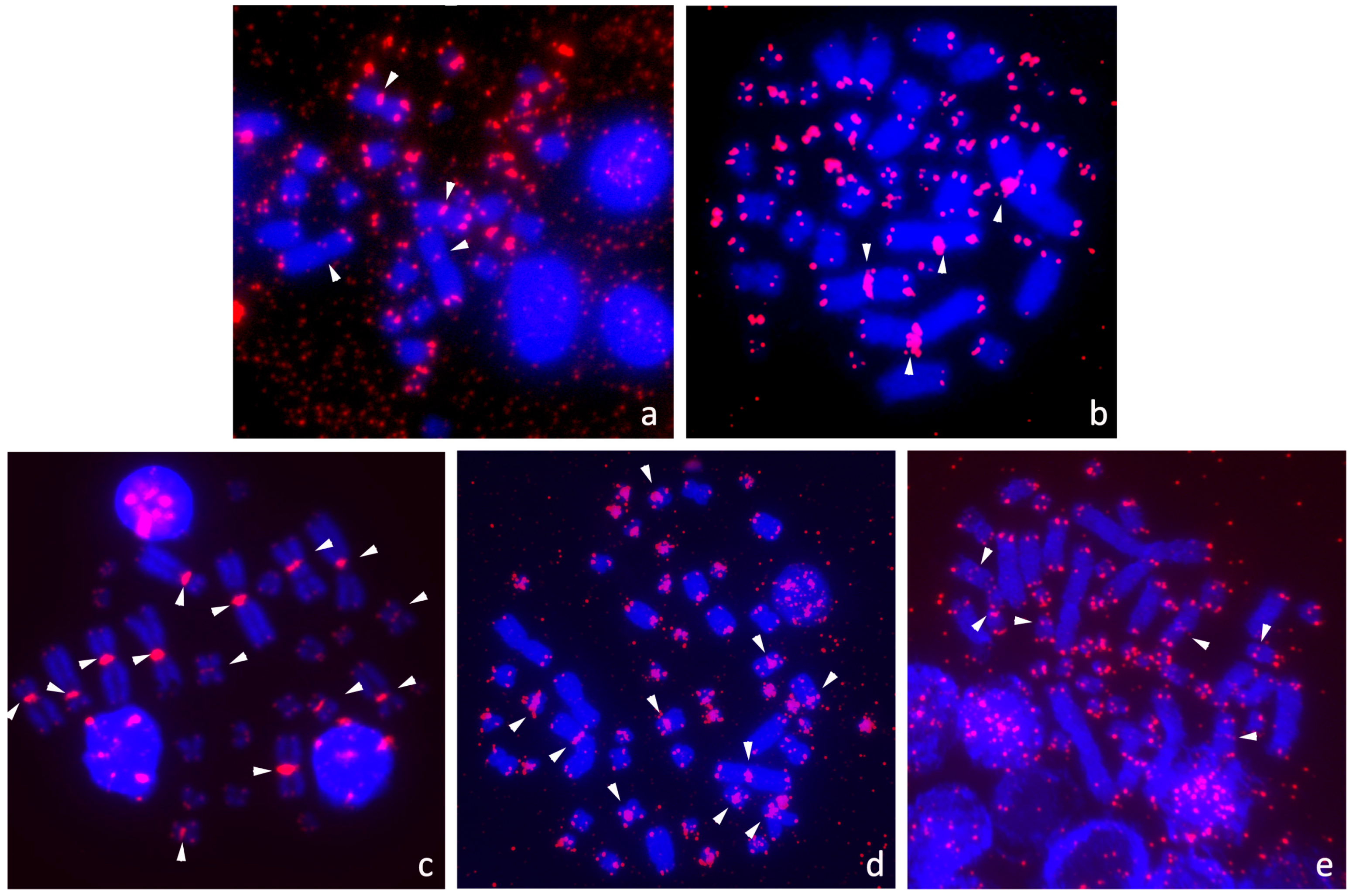 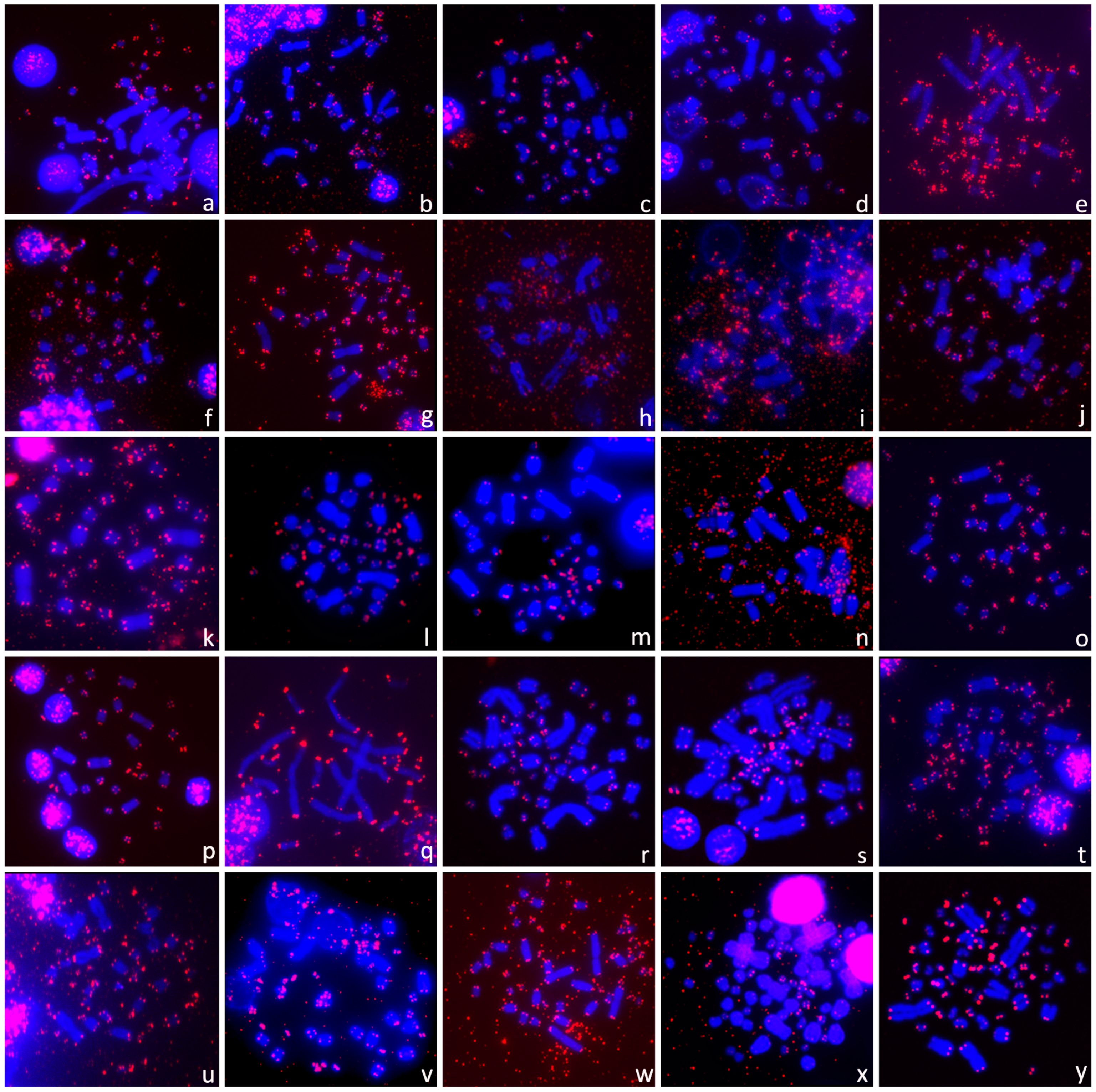 Table 1. Summary of species analyzed in this study.
Table 1. Summary of species analyzed in this study.
© 2020 by the authors. Licensee MDPI, Basel, Switzerland. This article is an open access article distributed under the terms and conditions of the Creative Commons Attribution (CC BY) license (http://creativecommons.org/licenses/by/4.0/).
We use cookies on our website to ensure you get the best experience. Read more about our cookies here.
Accept
We have just recently launched a new version of our website. Help us to further improve by taking part in this short 5 minute survey here. here.
Never show this again