Fungi and fungal-like organisms (oomycetes) that cause diseases in plants have impacted human communities for centuries and probably from the dawn of agriculture. In modern agriculture, there is a constant race between new strategies to manage fungal plant pathogens and their ability to adapt. An important component in this race is fungal genetic diversity. Mechanisms such as sexual and parasexual recombination that contribute to the creation of novel allele combinations in fungal plant pathogens are briefly discussed in the first part of this review. Advances in genomics have enabled the investigation of chromosomal aberrations of agriculturally important fungal isolates at the nucleotide level. Some of these cases are summarized in the second part of this review; it is claimed that the effect of chromosomal aberrations on pathogenicity should be studied mechanistically. More data on the effect of gene copy number variations on phenotypes that are relevant to agriculture are especially needed. Genome rearrangements through translocations have shaped the genome of fungal plant pathogens by creating lineage-specific chromosome territories encoding for genes participating in plant diseases. Pathogenicity chromosomes are unique cases of such lineage-specific genetic elements, interestingly these chromosomes can be transferred horizontally and thus transforming a non-pathogenic strain to a pathogenic one. The third part of this review describes our attempts to reveal mutators in fungal plant pathogens by identifying fungi that lack important DNA repair genes or respond to DNA damage in an unconventional way. We found that a group of fungal plant pathogens lack conserved genes that are needed for an important Holliday junction resolution pathway. In addition, in Fusarium oxysporum, the rate-limiting step in dNTP production is not induced under DNA replication stress. This is very different from organisms from bacteria to humans. It remains to be seen if these mechanisms promote genetic instability in fungal plant pathogens. View Full-Text
Keywords: fungal plant pathogens; genome plasticity; DNA repair fungal plant pathogens; genome plasticity; DNA repair
►▼ Show Figures 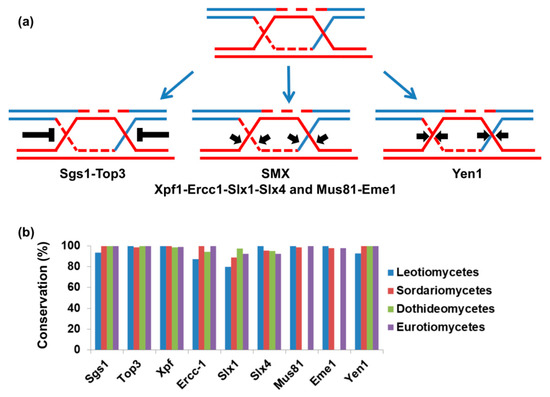