The Role of Number of Copies, Structure, Behavior and Copy Number Variations (CNV) of the Y Chromosome in Male Infertility
Next Article in Special Issue

The First Report of Genetic and Structural Diversities in the SPRN Gene in the Horse, an Animal Resistant to Prion Disease

Prion diseases are fatal neurodegenerative diseases and are characterized by the accumulation of abnormal prion protein (PrPSc) in the brain. During the outbreak of the bovine spongiform encephalopathy (BSE) epidemic in the United Kingdom, prion diseases in several species were reported; however, horse prion disease has not been reported thus far. In previous studies, the shadow of prion protein (Sho) has contributed to an acceleration of conversion from normal prion protein (PrPC) to PrPSc, and the shadow of prion protein gene (SPRN) polymorphisms have been significantly associated with the susceptibility of prion diseases. We investigated the genotype, allele and haplotype frequencies of the SPRN gene using direct sequencing. In addition, we analyzed linkage disequilibrium (LD) and haplotypes among polymorphisms. We also investigated LD between PRNP and SPRN single nucleotide polymorphisms (SNPs). We compared the amino acid sequences of Sho protein between the horse and several prion disease-susceptible species using ClustalW2. To perform Sho protein modeling, we utilized SWISS-MODEL and Swiss-PdbViewer programs. We found a total of four polymorphisms in the equine SPRN gene; however, we did not observe an in/del polymorphism, which is correlated with the susceptibility of prion disease in prion disease-susceptible animals. The SPRN SNPs showed weak LD value with PRNP SNP. In addition, we found 12 horse-specific amino acids of Sho protein that can induce significantly distributional differences in the secondary structure and hydrogen bonds between the horse and several prion disease-susceptible species. To the best of our knowledge, this is the first report regarding the genetic and structural characteristics of the equine SPRN gene. View Full-Text
Keywords: prion; shadow of prion protein gene (SPRN); polymorphisms; horse; Sho prion; shadow of prion protein gene (SPRN); polymorphisms; horse; Sho
►▼ Show Figures 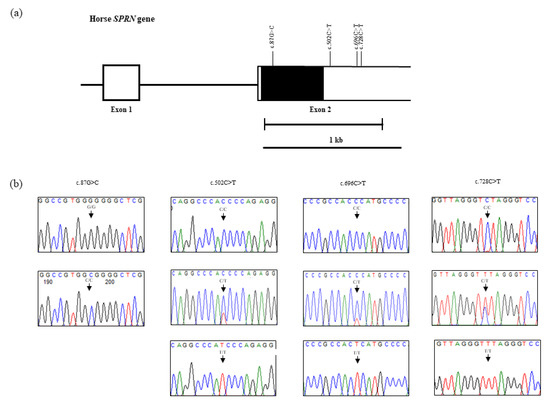